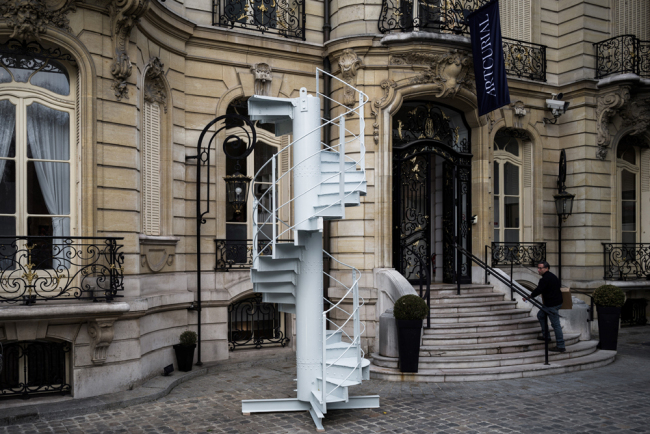 In this file photo a man looks at section of stairs from the Eiffel Tower's original structure displayed outside the Artcurial French auction house ahead of its forthcoming sale in Paris on November 8, 2018. A section of stairs from the Eiffel Tower in Paris sold for almost 170,000 euros on November 27, 2018 auctioneers announced, around three times the pre-sale estimate. (Photo: AFP)

A collector from the Middle East paid $190,73, three times of the initial estimate of a section of the Eiffel Tower's original spiral staircase at a Paris auction, Artcurial auction house said on Tuesday.

Composed of 25 steps, the 4.3-meter high section, which came from a private collection in Canada, had linked the second and third storeys of the Paris landmark "French Iron Lady" built in 1889.

In 1983, the staircase was removed when elevators were installed, and it was cut into 24 sections, with their length ranging from two to nine meters.

One of them has since been preserved on the first floor of the Eiffel Tower and three others have been donated to the museums of Orsay, La Villette and the Iron Story in Nancy. On Dec. 1, 1983, the remaining 20 sections were first auctioned.

The different sections are displayed at "prestigious locations around the world," with one piece in Foundation Yoishii in Yamanashi, Japan and another near the Statue of Liberty in New York, according to the auction room.

In 2016, an Asian collector paid 523,800 euros for a piece of the Eiffel tower's staircase, exceeding its estimate tenfold.