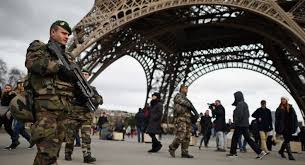 PARIS, Nov. 5 (Xinhua) -- France has decided to double its forces of border control to fight against the terrorist threat, President Emmanuel Macron said on Thursday.

This doubling was decided "because of the intensification of the threat" after recent attacks, said Macron during a visit to the Perthus pass at the France-Spain border.

"I would like to call for an overhaul of Schengen (area of free movement) and greater control," he added.

France's vigilance against terrorism is raised to the highest level of "attack emergency" throughout the national territory since Oct. 29, when a knife attack killed three people at Notre-Dame Basilica in the southern city of Nice.

On Oct. 16, a history teacher was beheaded outside a middle school in a Paris suburb for having shown pupils cartoons of Prophet Muhammad in a free speech civic lesson.