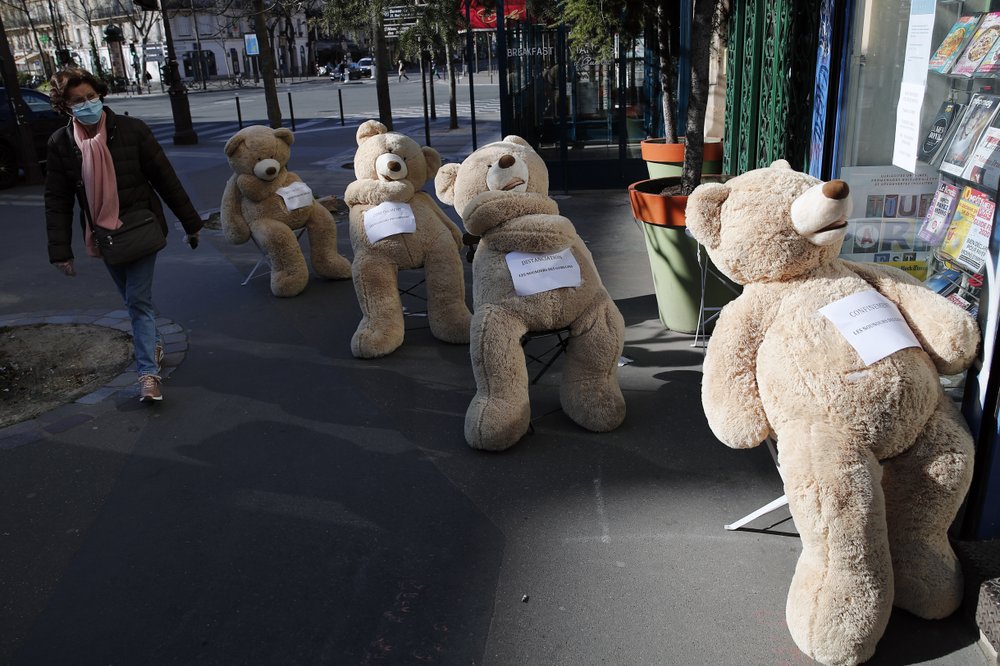 A woman wearing a protective mask walks by a shop with bears installed in line to show social distancing in Paris, Tuesday, March 24, 2020. (Photo: AP)

PARIS, March 25 (Xinhua) -- Declaring a war against "an invisible enemy," President Emmanuel Macron on Wednesday announced an army operation "Resilience" to back the fight against the coronavirus pandemic and support the population.

"We are at war and faced with the peak of the epidemic which is before us, I decided to launch the operation Resilience," Macron said on the sidelines of a visit to a military field hospital in Mulhouse, eastern France, the worst-hit region.

The operation will focus on helping population and supporting public services to cope with the COVID-19 epidemic, in France's mainland and overseas, notably in health, logistics and protection fields, he added.

"Our military forces are ready and determined," Macron said "We have only one priority: to beat the virus."

"I told you we were in a war, an invisible enemy...When we start a war we engage in it entirely, we mobilize in union," Macron said, in response to those "who would fracture the country."

"We must have only one obsession, to be united to fight the virus," he stressed amid mounting critics over the government's laxity to impose nationwide lockdown to curb the virus circulation.

Among the new batch of counter-coronavirus measures, the head of state pledged "massive" new investment plan for public hospitals.

"A lot has been done, not fast enough, not strong enough. Once this crisis is over, a massive investment plan and an upgrade of the career paths will be put in place for our hospital system," the president promised.

"We are just at the beginning. But we will make it through, because we will not surrender, because we have the strength," he stressed.

As of Wednesday, France has detected 25,233 cases of coronavirus infection, and 1,331 people have died of the virus, Director General of Health Jerome Salomon announced at a daily update of the coronavirus crisis.

In the last 24 hours, 2,933 more people were diagnosed with the COVID-19, which caused 231 more fatalities, as "the epidemic is still rapidly worsening in France," according to the health official.

A total of 11,539 patients were hospitalized, including 2,827 in a serious condition requiring life support, up by 12.4 percent from Tuesday, Salomon said, adding that 3,900 infected individuals were cured and returned home.

Salomon added the tally was based on hospitals' counting, and that authorities would compile data on deaths in retirement homes by next week "to have an overall accurate number of deaths across the country."

According to Frederic Valletoux, president of the French Hospitals Federation, the coronavirus fatalities were "probably higher" than the government's account.

"The increase in the official data is already major, but the absolute numbers would no doubt be effectively much higher if we aggregated what is happening in retirement homes as well as the people who die at home or who are not counted," Valletoux said.

Speaking to France info radio, the hospital chief noted that up to 150 retirements homes out of 700 in Ile-de-France region, a region surrounds the capital Paris, "could already be affected by the COVID-19".

"The crisis will be long. The next few days will be particularly difficult," warned Salomon. "The containment instructions remain the same : stay home."

France has instituted a two-week nationwide lockdown on March 17, and it would likely be extended.

The scientific council, which advises the government on the epidemic crisis, recommended to extend the containment at least until April 28, noting that three weeks were needed to obtain an initial estimate of the impact.

"A successful confinement is the necessary and essential condition to end the epidemic and to avoid as much as possible the saturation of our health system," said Salomon.

"Thanks to the measures taken in March, contacts between individuals have decreased. The possibilities of contagion have since then decreased and we hope it will reduce the number of patients in long term," he added.

The government would "take all the necessary measures over the long term" to address "a sanitary, economic and social shock," he said after a weekly cabinet meeting.