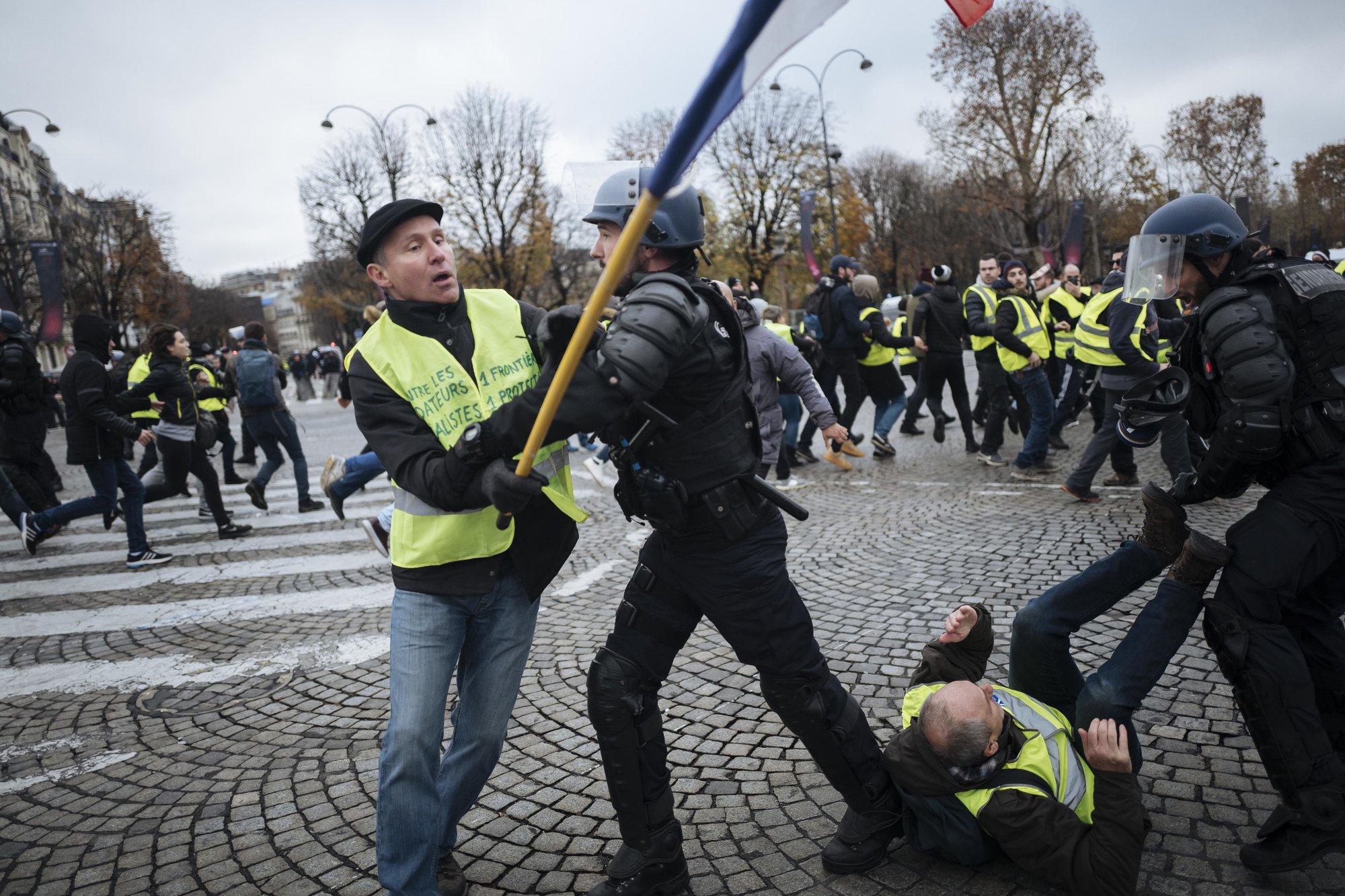 Herve Ryssen, left, close to the ultra-right and convicted for antisemitic and racist comments, wearing a yellow jacket, clashes with riot police officers on the Champs-Elysees avenue in Paris on November 24, 2018. Intolerance and conspiracy theories have haunted the margins of France’s “yellow vest” movement since the first protests over fuel taxes roused the discontented middle of French society. (Photo: AP)

PARIS (Xinhua) -- French President Emmanuel Macron is set to unveil new measures in response to the "Yellow Vest" crisis Monday evening, as the social movement continues to test his leadership.

"We decided to transform anger to solutions. Thank you for joining the Grand Debate. For several months, you have expressed your views and we listened to you. Tomorrow night, I'll answer you," Macron tweeted on Sunday evening.

According to his office, the president will address the nation on Monday evening to unveil measures to ease social tension and respond to "Yellow Vest" complaints, including "concrete measures" and "a new act and changes in depth."

In a rare move, the 41-year-old head of state will also open the Elysee doors to journalists on April 17 to justify his policy during a press conference, a meeting that he has avoided since he was elected in May 2017.

Speaking to RTL radio, Franck Louvrier, ex-communication advisor of former president Nicolas Sarkozy, said Macron TV appearance "will be a complicated exercise because it will have to be short and must be as clear as possible because it is highly anticipated."

Macron's last televised address was on Dec. 10, when he unveiled 10-billion-euro (11.31 billion-U.S. dollar) "economic and social emergency plan," which involved an increase in minimum wages and tax cut to defuse anger. But the protests have morphed into a broader social rebellion despite the plan.

His fresh initiative came after 22 weeks of protests staged by the "Yellow Vest", a spontaneous movement coordinated via social media which erupted on Nov. 17, 2018 and had put President Macron on the hot seat.

"This big debate is only a communication operation that has cost a lot. We are at the same point as in November," said Maxime Nicolle, one of the movement's main representatives, during a rally in the southeastern city of Toulouse.

"We stay mobilized because we are not heard and (protests) will continue the following Saturdays," he was quoted as saying by local media.

In a letter to French president she posted in her Facebook account, Ingrid Levavasseur, another "Yellow Vest" protestor, expected the due decisions to fall short of people's expectations. 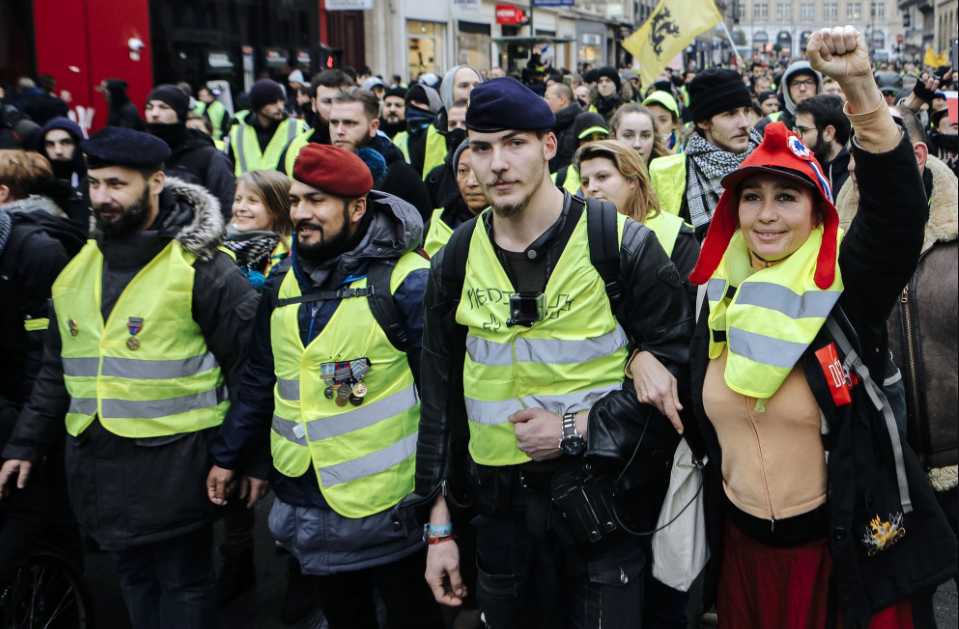 Victor Lenta, a former soldier who fought alongside pro-Russian separatist forces in Ukraine, 2nd left with a red beret, demonstrates with yellow vest protesters during a march in Paris on January 5, 2019.. Intolerance and conspiracy theories have haunted the margins of France’s “yellow vest” movement since the first protests over fuel taxes roused the discontented middle of French society. (Photo: AP)

"We will of course wait for your own statement to judge your decisions, but the information published by the media is worrying," she wrote.

"If you have to stick to that, the count will not be there and those who are like us 'Yellow Vests' or not, will say loudly that you play the illusionist," she added, calling for better public services and more investment in rural regions.

Macron has given little public indication of what his decisions may be, but according to local reports, they could include a cut in tax on revenue and pension's re- indexation, while a review of wealth tax, as requested by the movement may not be in the list.

"It will be a difficult situation (for Macron) because the three main demands of the 'Yellow Vests' which are partly supported by the opinion, are three really difficult demands for the government: the return of the wealth tax, the referendum of citizen initiative and that concerning the speed limit...," Philippe Moreau Chevrolet, communication professor at Sciences Po, told local broadcaster Europe1.

"It's a real gamble to the extent that one must not disappoint... If the made announcements are not up to the stakes, Macron will give the impression that he is not a sincere president or that he does not understand exactly the French's expectations. And that will likely accelerate his unpopularity and bring him a little more into the crisis instead of getting him out of it," he added. (1 euro = 1.131 U.S. dollar) 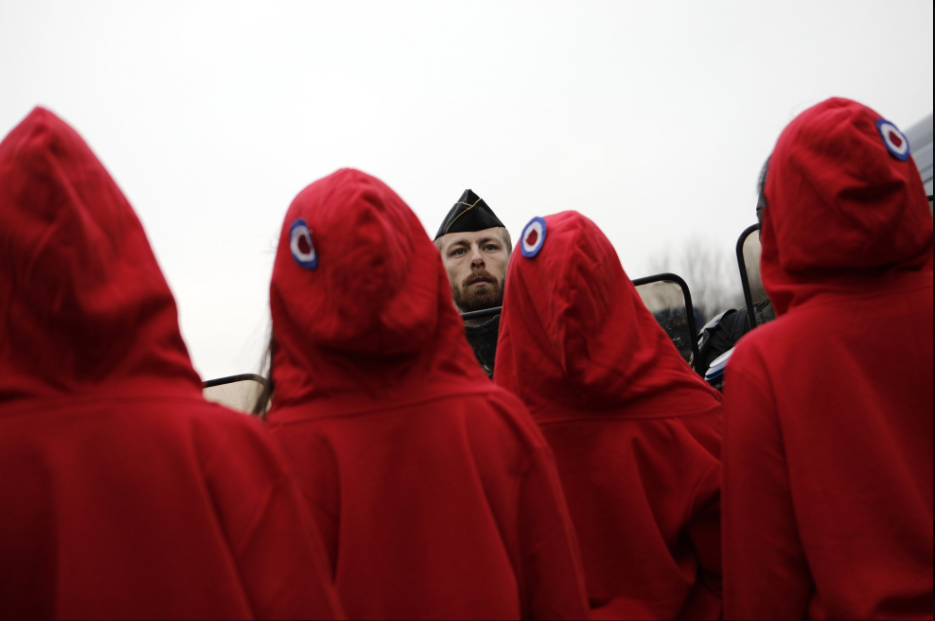 Activists dressed like Marianne, a symbol of the French Republic, face riot police officers during a yellow vests protest, in Paris. Intolerance and conspiracy theories have haunted the margins of France’s “yellow vest” movement since the first protests over fuel taxes roused the discontented middle of French society on December 15, 2018. (Photo: AP)