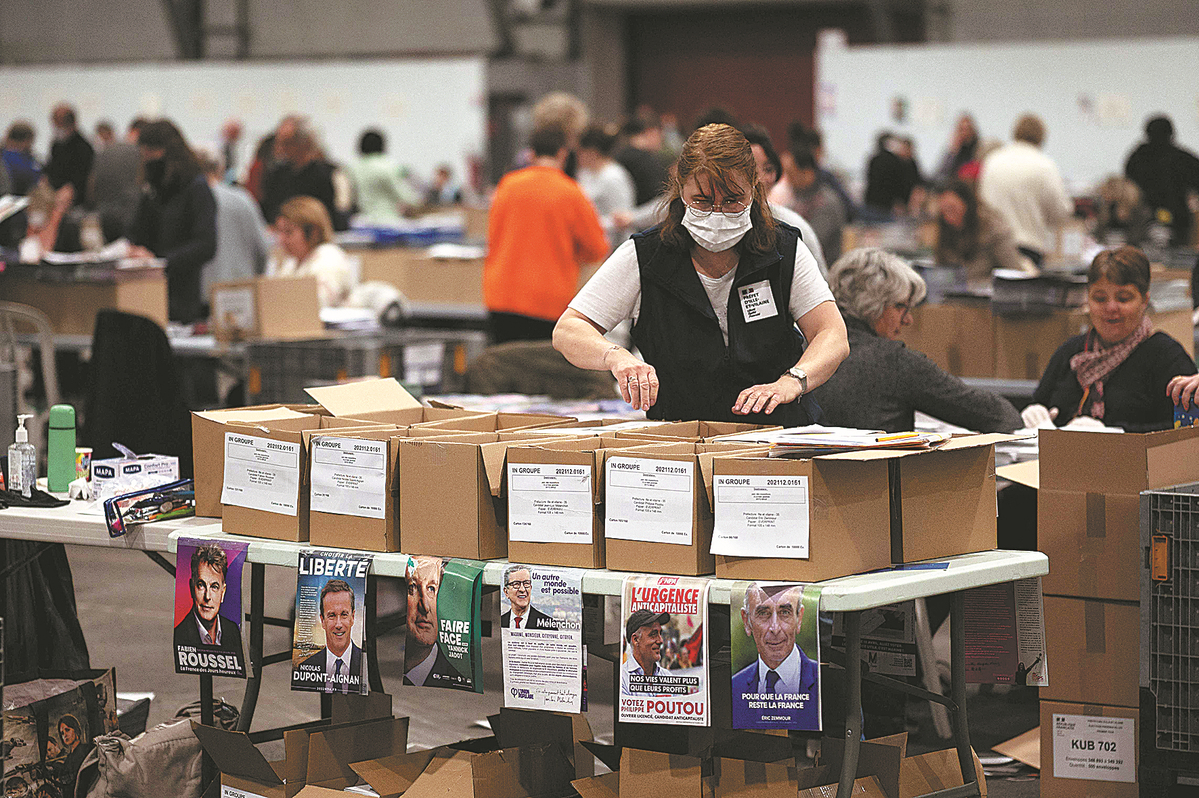 Civil servants in Bruz on Monday prepare to mail out election material in the lead-up to the French presidential election. (Photo: AFP)

Opinion polls have long predicted Macron will win a second term but Le Pen has tightened the gap. Le Pen, whose presidential campaign has gained momentum in recent days, on Monday captured 48.5 percent of voter intentions in a poll of a likely runoff against Macron, the highest score she has ever notched, according to Reuters.

"Do you realize what retirement at 65 is? It's simply completely unfair," she told BFM TV, lambasting Macron's plan to increase the legal age at which one gets a full pension from 62 to 65.

Le Pen wants to keep the threshold at 62, and bring it down to 60 for those who started working before age 20.

Macron, asked about criticism of his pension reform plans, told France Inter radio: "Those who tell you we can keep (the pension system) as it is now are lying to you."

Raising the retirement age－with exceptions for those who have tough jobs or worked longer than others－was needed to make the system viable and increase low pensions, he said.

" (Reform) will be of course difficult, because the left side of the spectrum is very much opposed to this reform," said Charlotte de Montpellier, an economist at ING. "But it's very much needed because the public debt and public deficits are very, very high, so we need to find a way to save some money."

Sunday's first round of voting sees 12 candidates on the ballot paper, with the top two, expected to be Macron and Le Pen, as was the case in the last election, advancing for a head-to-head runoff a fortnight later.

Macron delivered his first mass rally address of the campaign at the weekend, urging supporters not to take victory for granted.

Without mentioning Le Pen or populist right-winger Eric Zemmour by name, he made a long, impassioned speech, citing the shock 2016 Brexit referendum result in the United Kingdom and the need to get out and vote.

"Don't believe the pollsters or the pundits who tell you that it's impossible, unthinkable, that the election is over, that all will be fine," he warned.

"Look at us! Look at yourselves! Five years ago, they said it was impossible (we would win)… look at Brexit and so many elections, all that seemed improbable and yet came to pass. Nothing is impossible."

A poll released on Monday by Harris Interactive poll, in line with every other survey over the past month, still shows Macron as the likely winner.

Winning a second term could be more challenging for Macron than victory in 2017. His lead has shrunk as he entered the campaign late, apparently distracted by the Ukraine crisis. He has focused on rather unpopular economic reforms including raising the retirement age, unsettling his camp, Reuters reported. Le Pen's focus on the declining purchasing power of middle- and lower-income voters has paid off. Her ratings have continued to improve for both the first round and the April 24 runoff.

In 2017, Macron won the runoff vote against Le Pen with 66 percent of the ballots cast.