France's Macron to hold meeting on pensions as strike bites 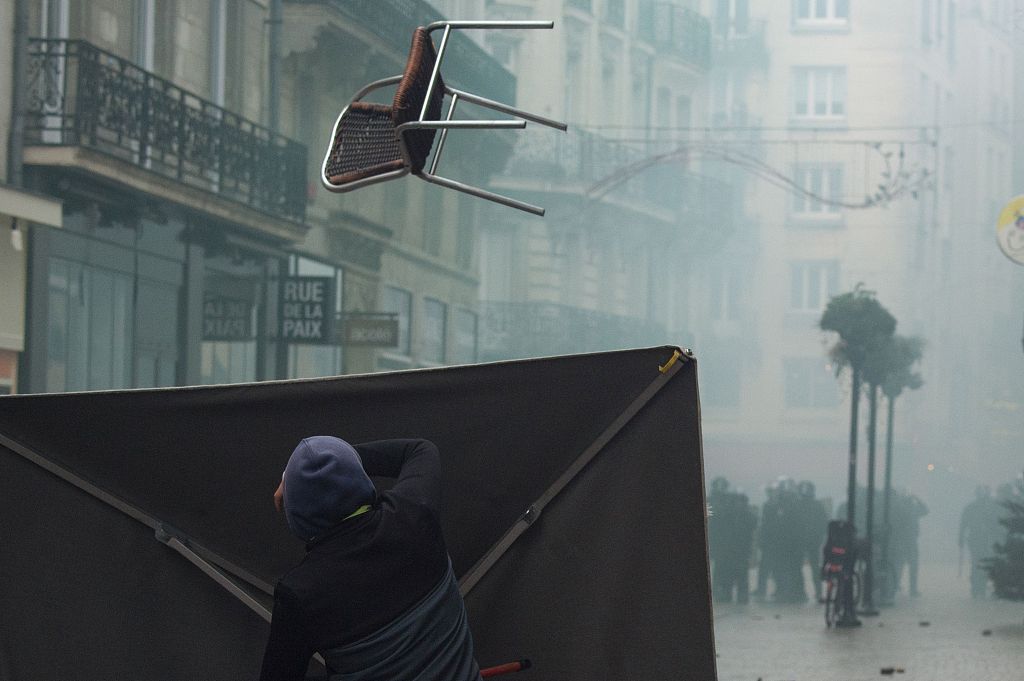 A chair is seen in the air during clashes between anti-riot police officers (CRS) and protesters during a demonstration against unemployment and precariousness in Nantes, western France, on December 7, 2019. (File photo: VCG)

French President Emmanuel Macron will on Sunday meet ministers involved in his radical pension reform which has prompted a nationwide strike and brought key transport services to a standstill.

Transport in Paris remained paralysed Sunday, with only the two driverless lines of the Metro in operation while national rail operator SNCF warned just one in six high-speed trains would be running.

The strikes, which began on Thursday over the plans for a single points-based pension scheme, recall the winter of 1995, when three weeks of huge stoppages forced a social policy U-turn by the then-government.

Prime Minister Edouard Philippe insisted his government would not abandon the plan.

"If we do not make a far-reaching, serious and progressive reform today, someone else will make a really brutal one tomorrow," Philippe was quoted as saying by Le Journal du Dimanche.

But the leader of the hardline CGT union, Philippe Martinez, told the paper "We will keep up until the withdrawal" of the reform plan.

The prime minister is due to unveil full details of the reform to merge the 42 existing pension plans, which could spark more union anger.

"We can provide extremely positive answers for many people who suffer injustices in the current system: women, farmers, and career-changers in particular," he said.

Unions have vowed a second series of mass demonstrations nationwide on Tuesday and there is expected to be little easing of the transport freeze over the coming days.

In a joint statement, the three main rail unions called for the strike to be stepped up on Monday.

The strikes could prove to be the biggest domestic challenge yet for Macron, who came to power in 2017 on the back of promises to radically reform France and has sought a prominent place on the international stage as Europe's number one statesman.

Macron was widely believed to have ridden out the challenge posed by the "yellow vests" whose weekly Saturday protests against inequality in France had shaken the government over the last year.

But the yellow vests have also sought to use the momentum of the strike movement and held a fresh protest in Paris on Saturday and others in several cities across France.

Unions say Macron's proposal for a single-pension system would force millions of people in both the public and private sectors to work well beyond the official retirement age of 62.

At least 800,000 took part in rallies around the country on Thursday, according to the interior ministry -- one of the biggest demonstrations of union strength in nearly a decade.

A crucial week now lies ahead: commuters will struggle to get to work on Monday and more giant nationwide protests are planned for Tuesday.

Transilien, the operator of the Paris region rail network, warned of severe shortages Monday and recommended using other means of transport such as car-sharing.

The international Eurostar and Thalys rail services have been hit by cancellations.

Tourists in Paris also faced some disappointments: the world-famous Louvre Museum said some rooms would be closed due to the strikes, while the landmark exhibition of painter El Greco at the Grand Palais was closed.

The Paris Opera and several theatres in the capital have cancelled performances over the last few days due to the strike.