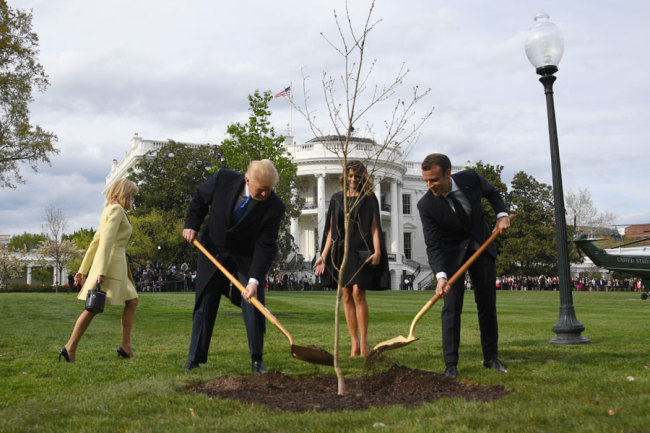 US President Donald Trump and First Lady Melania Trump participate in a tree planting ceremony with French President Emmanuel Macron and his wife Brigitte Macron on the South Lawn of the White House in Washington, DC, on April 23, 2018. (Photo: AFP)

French President Emmanuel Macron promised to send a new oak to President Donald Trump after the tree he gave him during last year's state visit to the United States died.

In an interview broadcast Tuesday evening by Swiss television RTS, Macron said the death of the tree shouldn't be read as a indication of the up-and-down relationship between France and the United States.

"It's no big drama," Macron said. "The symbol was to plant it together."

The oak died during the quarantine it was put in just after being symbolically planted by Macron and Trump in the White House's gardens.

Macron said he will send another oak from the Belleau Wood in northern France, where more than 1,800 American soldiers died in a key World War I battle in 1918.