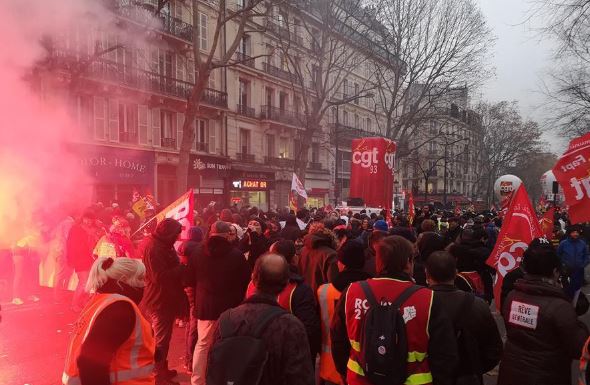 Pietraszewski replaced Jean-Paul Delevoye, who resigned on Monday after media reports criticized him for holding paid private sector positions without declaring them.

During the handover ceremony, Delevoye said his successor "masters the file" and "there will be no break in the management of the reform."

Pietraszewski, a lawmaker representing La Republique en Marche (LREM) party of President Emmanuel Macron since 2017, pledged his will to "continue the social dialogue" and assured the unions of his "full availability."

On Monday night and Tuesday morning, tens of thousands of households in the Gironde department in the southwest and in the cities of Lyon, Nantes, Orleans and Paris lost power. The hardline CGT union said its members were behind the cuts, warning further cuts would come.

On Tuesday afternoon, several hundred thousand French people once again took to the streets to protest against the pension reform, manifesting anxieties and discontent.

Facing fierce union resistance, the government did not back down. Philippes told the National Assembly that the government's determination to reform "is total". He insisted that the new single point-based system, compared to the current 42-scheme system, will be fairer and more transparent.

Late on Tuesday evening, union leaders announced they would not observe a "Christmas truce" and urged members to take "local actions" throughout holidays unless government drops its reform plan.

Wednesday proved another day of severe disruption. On the railways around 80 percent services were cancelled. Paris public transport is again badly hit, with just two automated lines running as normal while others either closed altogether or offering a limited service during rush hour only.