Defiant "Yellow vest" demonstrators gathered on the Champs-Elysees in Paris on Saturday morning for a fifth and decisive weekend of protests despite calls by the French government to stay home. 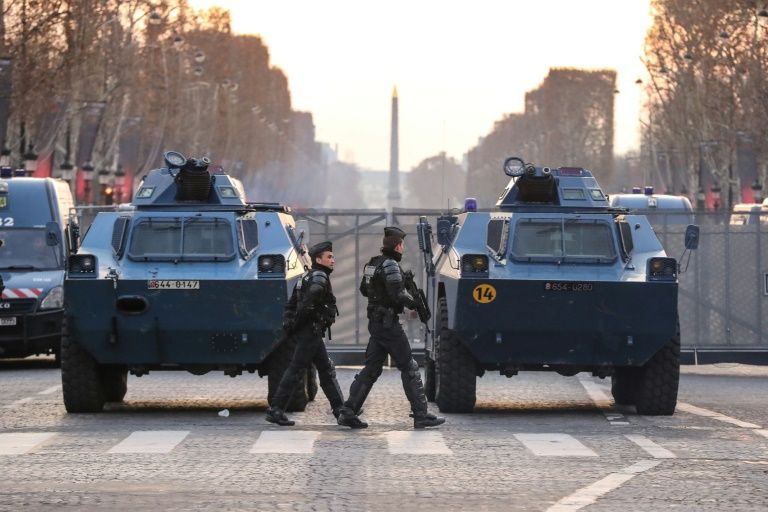 President Emmanuel Macron, facing the biggest crisis of his presidency, announced a series of concessions on Monday to defuse the explosive "yellow vest" movement which swelled up from rural and small-town France last month.

He is hoping the package of tax and minimum wage measures, coupled with a terror attack on Tuesday night in Strasbourg and bitter winter weather, will help bring calm to the country after a month of violent clashes and disruption.

The last three Saturdays have been marked by violent demonstrations, but by midday on Saturday the situation appeared calm in Paris and the number of protesters was down amid an overwhelming show of force from police.

Around 60 people had been arrested in the capital by 11:00 am (1000 GMT) compared with 500 at the same time last weekend, according to figures released by the local government.

"I've come to demonstrate peacefully; as soon as there's violence, I'm leaving," Monaem Zarhouni, a 43-year-old father of two, told AFP in the capital on Saturday.

"Last time, we were here for taxes," a 28-year-old "yellow vest" called Jeremy told AFP as he joined a group gathering in freezing cold on the Champs-Elysees shortly after 8:00 am (0700 GMT)

"This is for the institutions: we want more direct democracy," he said, adding that people needed to "shout to make themselves heard."

Throughout the morning, riot police played a game of cat-and-mouse with groups of protesters who moved around the centre of Paris, much of which has been cordoned off for traffic.

There were isolated incidents of tear gas being fired, but a fraction of the amount used on the weekends of December 8 or December 1 when graffiti was daubed on the Arc de Triomphe in scenes that shocked France.

Until this week, a clear majority of French people had backed the protests, which sprung up initially over tax hikes on transport fuel before snowballing into wide opposition to Macron's pro-business agenda and style of governing.

But two polls published on Tuesday -- in the wake of Macron's concessions -- found the country was now split broadly 50-50 on whether the protests should continue.

Around 8,000 police were on duty in Paris on Saturday, the same number as last weekend, backed up by 14 armoured vehicles, water cannons and horses which are used for crowd control.

Around 90,000 security forces were mobilised last Saturday across France and 2,000 people were detained, around half of them in Paris.

"That people demonstrate, no problem, but the vandalism is appalling," Maria, who manages the Le Vin Coeur restaurant near the Arc de Triomphe in Paris told AFP on Saturday morning.

Like thousands of other business and restaurant owners across the capital, she was apprehensive and ready to pull down her shutters and close at the first whiff of teargas.

Many of the "yellow vest" figureheads, along with leaders of the far-left Unbowed France party, urged protesters to turn out on Saturday to pressure the government into making further concessions.

Others suggested that the mostly small town and rural protesters should show resolve by rallying in the regions rather than heading for the capital.

France "needs calm, order and to go back to its normal functioning," Macron said Friday.

On Thursday, government spokesman Benjamin Griveaux had called on protesters to stay at home on what is normally a busy shopping weekend ahead of Christmas.

"It would be better if everyone could go about their business calmly on Saturday, before the year-end celebrations with their families, instead of demonstrating and putting our security forces to work once again," he said.

He was speaking in the wake of an attack Tuesday in the eastern city of Strasbourg, which left four dead and 12 wounded.

In a bid to end the protests, Macron announced a package of measures on Monday estimated by economists to cost up to 15 billion euros ($17 billion).

He cancelled the planned fuel tax hikes, offered a rise in the minimum wage, tax relief for pensioners and tax-free overtime for workers in 2019.