France has concluded after analysing “reliable intelligence” and open sources that a chemical attack on Douma on April 7 was carried out by Syrian government forces, a declassified intelligence report showed on Saturday. 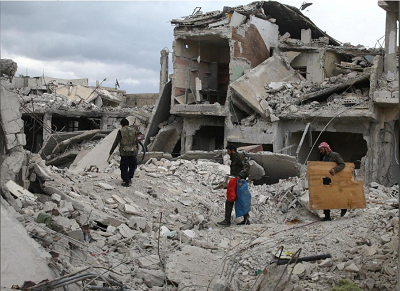 “On the intelligence collected by our services, and in the absence to date of chemical samples analysed by our own laboratories, France considers, beyond possible doubt, a chemical attack was carried out against civilians at Douma ... and that there is no plausible scenario other than that of an attack by Syrian armed forces,” the report said.

It was released after coordinated air strikes by Britain, France and the United States on Syrian government targets overnight.

“After examining the videos and images of victims published online, they (intelligence services) were able to conclude with a high degree of confidence that the vast majority are recent and not fabricated,” the report said.

It said no deaths from mechanical injuries were visible and all symptoms were characteristic of a chemical weapons attack, particularly choking agents and organophosphorus agents or hydrocyanic acid.

“Reliable intelligence indicates that Syrian military officials have coordinated what appears to be the use of chemical weapons containing chlorine on Douma, on April 7,” it said. It gave no other details on the intelligence.

The report, which provided a broad outline of the Syrian government-backed offensive supported by Russia on the eastern Ghouta region over recent months, also said French services had assessed that not all Syrian government chemical stockpiles and capacities had been declared to the UN.

Syria had omitted to declare many of the activities of its Scientific Studies and Research Centre (SSRC), the report said.

It said Syria had not answered questions on matters including possible remaining stocks of yperite (mustard gas) and DF (a sarin precursor), undeclared chemical weapons of small calibre and signs VX and sarin on production and loading sites.