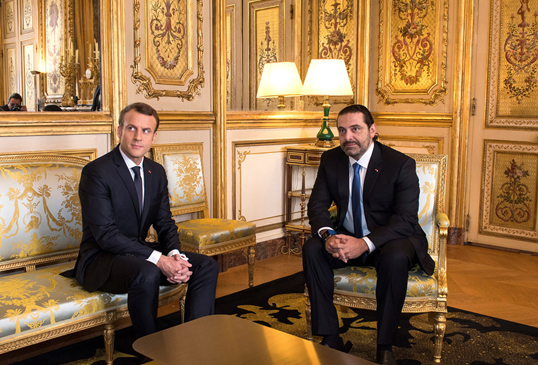 Paris (People's Daily app) - On November 18, French President Emmanuel Macron received at the Elysee Palace Saad Hariri as Lebanese Prime Minister, who announced to return to his country on November 22 for the National Day. Hariri thanked Macron for his “infallible friendship" in this crisis, and to recall that "France has once again shown the greatness of its role in the world and the region". "It (France) proves its attachment to Lebanon and its stability."

"Stability as well as peace" of Lebanon are the main aims of receiving Saad Hariri in France, declared Emmanuel Macron. "Lebanon needs a strong state to maintain its community coexistence and it is essential to protect Lebanon from regional crises," said the Elysee Palace which invoked a possible meeting to be hold in Paris in the near future to support Lebanon, gathering the United States, the United Nations, the European Union and various countries in the Middle East. But no date has yet been set.

Analyst comments that the diplomatic method of Emmanuel Macron is to "talk to everyone". The Middle East is no exception to this desire to appease all sides and make Paris an arbitrator. By maintaining such a position in international issues since the election of Emmanuel Macron, the image of France has been “improved” abroad considerably. In the meantime, two other elements favor the return of French influence in the region: the Brexit, which has temporarily whirled English diplomacy and the arrival at the White House of an unpredictable president.

However, French ambitions may run up against the complexity of regional situations and power struggles. Not having strong levers in the Middle East could thus limit the influence of France. Retrospectively, despite its proposal to create a contact group, French diplomacy has not yet managed to regain a foothold in the Syrian conflict, where Iran, Russia and Turkey are the ones who are actively engaged. Although seen as a military and diplomatic power and despite its historical connection with the Middle East, France has great difficulties in weighing on the regional issues and turning its diplomatic initiatives into concrete progress.

If the Lebanese crisis is appeased for the moment as the French president mediated, it is far from being resolved. French media reported Emmanuel Macron blamed previously Riyadh for financing terrorist groups, which led to the cooling of Franco-Saudi relationship. The friendly gesture towards Iran where the French president aims to get repaid soon has also annoyed Riyadh. Given the considerable weight of Iran and Saudi Arabia, the mediation appears extraordinary hard. In this climate, Jean-Yves Le Drian, French Foreign Minister who visited Riyadh several days ago, has put off its travel to Iran for the nuclear negotiation.