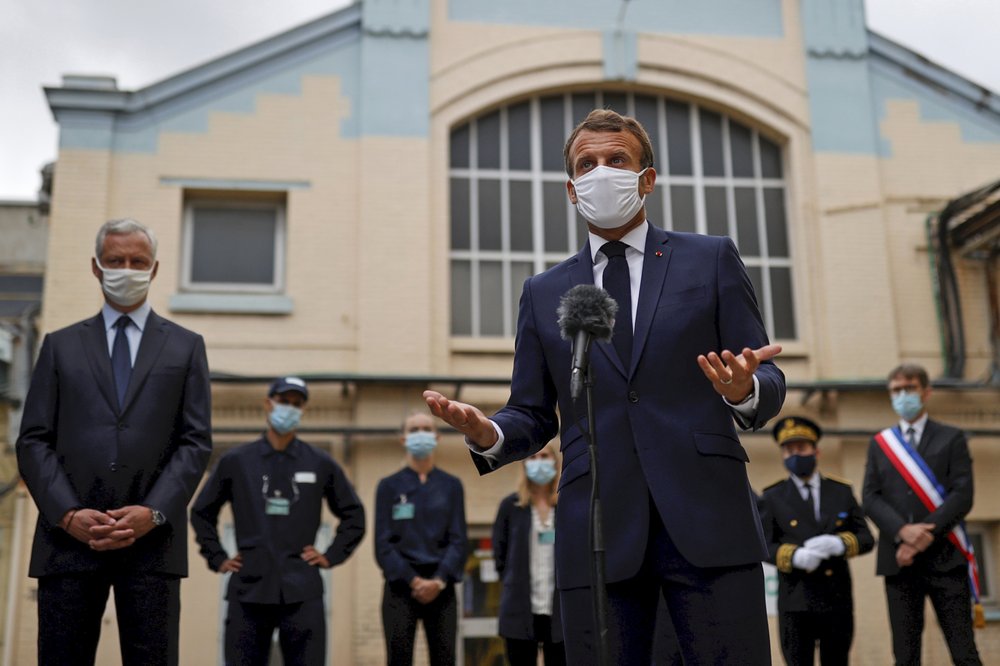 French President Emmanuel Macron gestures as he speaks to the media during a visit to a site of pharmaceutical group Seqens, in Villeneuve-la-Garenne, near Paris, August 28, 2020. (Photo: CGTN)

France has recorded its biggest daily rise in coronavirus infections since March but President Emmanuel Macron remains cautious about another nationwide lockdown considering the harm it may do to the economy.

The French health ministry said France has seen an "exponential" rise in cases, recording 7,578 on Friday, following increases of 6,111 on Thursday and 5,429 on Wednesday.

Despite the sharp rise, daily deaths in hospital are relatively stable, as young people, who make up most of the new cases, are less vulnerable to the virus.

Shortly after the figures were released, Macron said "We're doing everything to avoid another lockdown, and in particular a nationwide lockdown. Containment is the crudest of measures to fight against the virus."

He cautioned that a second lockdown would set back the country's fragile economic recovery but added it would be dangerous to rule out any scenario.

Like other hard-hit western European countries, France imposed a sudden and strict lockdown in March, during which most residents were confined to their homes. The restrictions were gradually lifted from May 11 after infections dropped sharply.

The authorities are now searching for ways to limit the spread of the disease without a new lockdown. On Friday, Parisians were ordered to wear masks at all times outdoors in the capital.

France has seen more than 30,600 confirmed deaths from COVID-19 with total infections of 304,907, the third-highest toll in Europe after Britain and Italy. Experts say confirmed numbers understate the true impact of the pandemic due to limited testing and other factors.

But the government is going ahead with plans to send France's 12.9 million students back to classrooms starting Tuesday in what is being seen as a major step back towards normality.

And France's beloved Tour de France professional cycling race kicks off a three-week trek across the country Saturday despite the escalating infections.

German Chancellor Angela Merkel warned on Friday that the crisis will be "more difficult" in the autumn and winter, as people have been able to stay outdoors over the summer.

A protest against Germany's coronavirus restrictions was due to take place in Berlin on Saturday, despite a consistent rise in cases above 1,000 a day recently.

Hungary said foreigners would be barred from entry from September 1, while returning citizens would need two negative tests to avoid a 14-day quarantine.

Greece said it was extending a lockdown on migrant camps to at least September 15, amid ongoing concerns over the spread of the virus in hugely overcrowded camps on five Aegean islands.