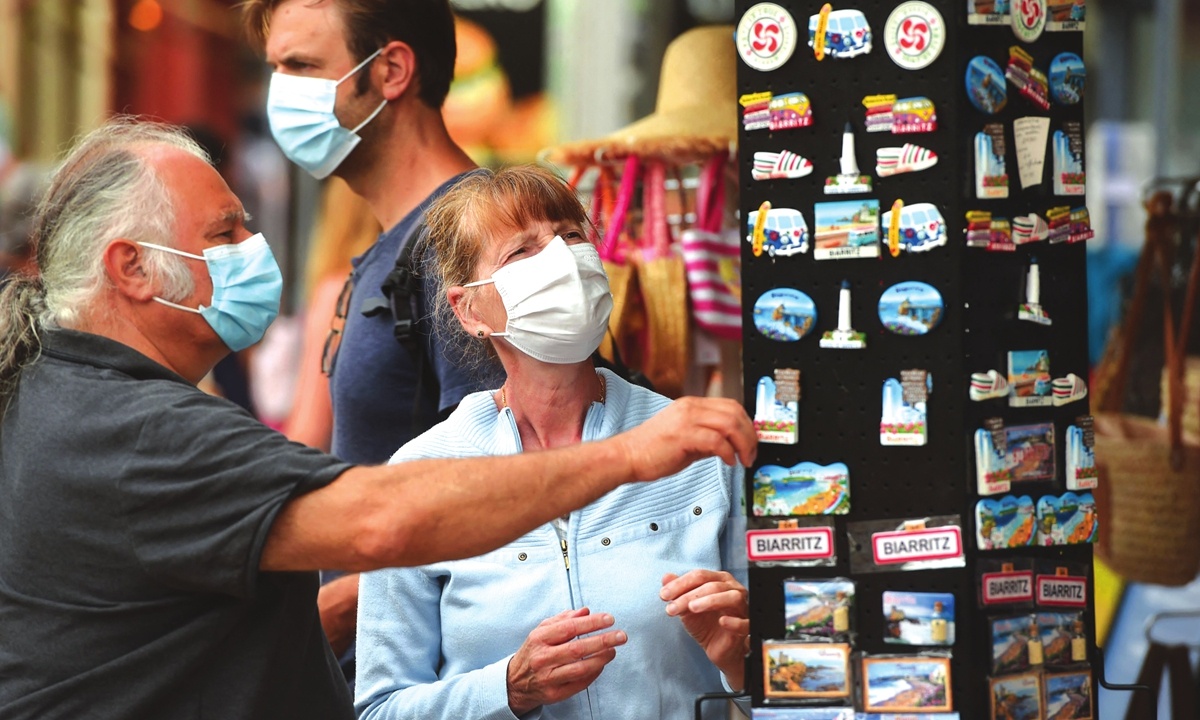 People wearing protective masks look at souvenirs in Biarritz, southwestern France, on Tuesday. France's highest constitutional authority said on Monday it would rule next week on new legislation passed by parliament that would make vaccine passes a key part of daily life for people in the country. (Photo: VCG)

People in France would from Monday need to show a health pass to enjoy usually routine activities such as sipping a coffee in a cafe or traveling on an intercity train, in a plan championed by President Emmanuel Macron to squeeze COVID-19 infections and encourage vaccination.

The government is pressing ahead with the extension of an already-existing health pass to cafes, restaurants and intercity travel, despite four weekends of protests that saw almost a quarter of a million rally nationwide on Saturday.

Macron, who has expressed exasperation with the protests, hopes that the plan will help ramp up vaccinations and quell the fourth wave of coronavirus in France in a strategy similar to that of EU neighbors such as Italy and Germany.

The health pass is generated in a QR code either by a full course of vaccinations, a recent negative virus test or a recovery from COVID-19. The government expects a one-week grace period for consumers and businesses to get used to the new rules.

Veran announced slight modifications in the rules - notably that tests could be 72 hours old and not 48, and also that self-tests carried out under medical supervision would be allowed.

But he emphasized there would be no going back on rules which will remain in place until at least November, lamenting the attention paid to those who are "anti-vax, anti-science and anti-state" over those who respected distancing and had been vaccinated.

"I am willing to hear the fears, do everything to reassure. But there comes a time when enough is enough," he said.

The numbers in hospital are still way off previous highs seen in the pandemic, but there were 1,510 people in intensive care with COVID-19 on Saturday compared with 1,099 just one week ago.

Macron hopes the plan will further accelerate the vaccination drive in France where over 55 percent are now double-jabbed. Aides have noted that almost 7 million new bookings were made for first jabs since the plans were outlined.

Cases have been rising fastest in Corsica and the Mediterranean coast, which are seeing a summer influx of holidaymakers.

But the biggest concern is over France's overseas territories in the Indian Ocean and Caribbean, where new lockdowns have been ordered amid a slow vaccine uptake.

About 237,000 people protested across France on Saturday, including 17,000 in Paris, the interior ministry said, exceeding the 204,000 recorded last weekend - numbers that are extremely unusual for protests at the height of the summer break.