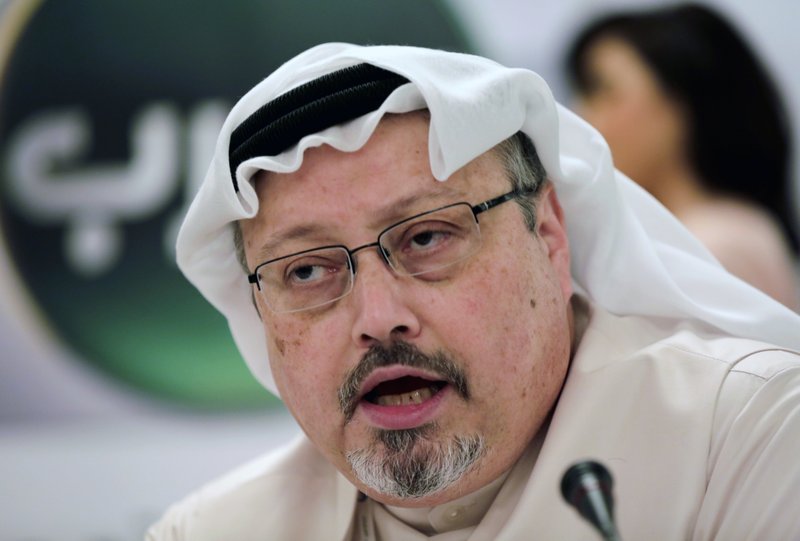 The Latest on the fallout from the killing of Saudi journalist Jamal Khashoggi (all times local):

France appears to be shrugging off concerns about the Saudi crown prince’s presence at a Group of 20 summit next week, despite global concern over the killing of Saudi journalist Jamal Khashoggi.

France has joined Germany in imposing travel sanctions against 18 Saudi nationals suspected of links with the death in Istanbul last month. A senior French official on Friday reiterated France’s demands for a thorough investigation.

He wouldn’t comment on US President Donald Trump’s defense of Saudi Crown Prince Mohammed bin Salman, accused by US intelligence officials of ordering the writer’s killing.

The crown prince has denied involvement. Critics accuse Trump of turning a blind eye to Saudi Arabia’s abuses because of its influence on the world oil market.

The French official deflected questions about the optics of Macron, Trump and other leaders around the same table with the prince at the G-20 meetings in Argentina Nov. 30-Dec. 1. The official said it’s unclear whether Macron will meet with bin Salman privately.

Turkey’s foreign minister has criticized President Donald Trump, saying the US leader appears to want to turn a blind eye to the killing of journalist Jamal Khashoggi by Saudi agents at the kingdom’s consulate in Istanbul.

Mevlut Cavusoglu also described many European nations’ response to Khashoggi’s killing as “artificial” and “cosmetic.” Cavusoglu was referring to bans imposed by some countries on the Saudi citizens detained in Saudi Arabia over the killing, from entering European nations.

Trump on Thursday disputed that US intelligence officials had concluded that Saudi crown prince had ordered the killing of Khashoggi — a US-based journalist who was critical of his rule.

Cavusoglu says “Trump’s statements amount to him saying ‘I’ll turn a blind eye no matter what.’”

He added: “Money isn’t everything. We must not move away from human values.”

Mevlut Cavusoglu told Turkey’s CNN-Turk television on Friday that Turkey sees no “obstacle” for a meeting between the two but added that Erdogan would make the final decision on whether to meet the prince at the two-day G-20 summit that starts on Nov. 30.

It would be the first official contact between the prince and Erdogan, who has kept international pressure mounting on Saudi Arabia over the killing of journalist Jamal Khashoggi at the Saudi Consulate in Istanbul last month.

Cavusoglu wouldn’t confirm a Turkish media report claiming the CIA has an audio recording of a telephone conversation in which the crown prince gave instructions to silence Khashoggi.

President Donald Trump has disputed that US intelligence officials concluded that the de facto leader of American ally Saudi Arabia ordered the killing of a US-based journalist critical of the kingdom’s royal family.

Critics in Congress and high-ranking officials in other countries are accusing Trump of ignoring human rights and giving Saudi Arabia a pass for economic reasons, including its influence on the world oil market.

Trump said this week he would not impose harsher penalties on Saudi Crown Prince Mohammed bin Salman over the death and dismemberment of Washington Post columnist Jamal Khashoggi inside the Saudi Consulate in Istanbul last month.