France tells Libya to act over migrant "crimes against humanity" 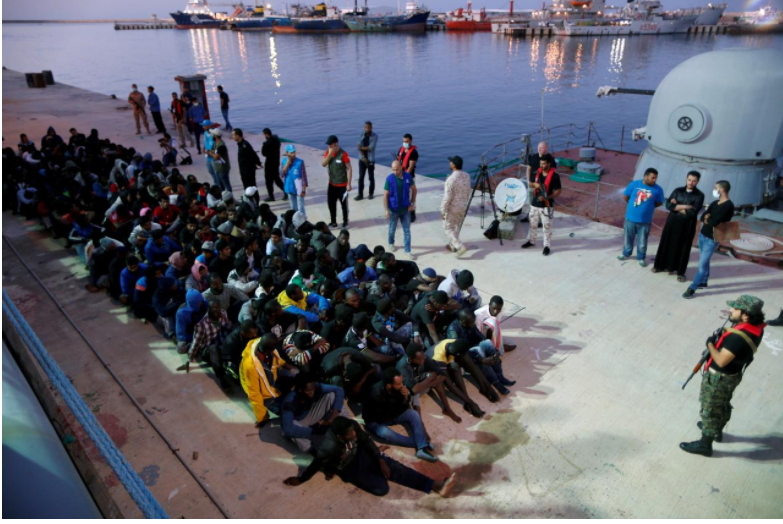 Migrants arrive at a naval base after they were rescued by Libyan Navy, in Tripoli, Libya November 4, 2017. REUTERS/Ahmed Jadallah

France demanded on Wednesday an urgent U.N. Security Council session on human trafficking in Libya and raised the possibility of sanctions on the country after a video appearing to show African migrants sold as slaves there sparked global outrage.

Convened by Italy, which struck a deal with Libya to slash the number of migrants reaching its shores, the Council on Tuesday unanimously backed a resolution urging tougher action to crack down on human trafficking and modern slavery worldwide.

Speaking to lawmakers, French Foreign Minister Jean-Yves Le Drian suggested Paris wanted to take things further and called for an urgent session of the Council to specifically discuss the situation in Libya.

“Libyan authorities, who have been alerted several times, including by myself because I was there in September, have decided to open an investigation into the facts,” Le Drian said.

“We want it to go fast and if the Libyan justice system cannot carry this procedure through then we should open international sanctions,” Le Drian said.

Footage appearing to show African migrants sold as slaves in Libya has sparked an international outcry with protests erupting across Europe and Africa, while artists to soccer stars to U.N. officials have made pleas for the abuse to end.

The video broadcast by CNN showed what it said was an auction of men offered to Libyan buyers as farmhands and sold for $400, a chilling echo of the trans-Saharan slave trade of centuries past.

“What has been revealed is indeed trafficking of human beings, it’s a crime against humanity,” Macron said during a news conference with African Union President Alpha Conde.

Macron said he wanted the U.N. Security Council to discuss what concrete steps could be taken to tackle the issue.

A French diplomat said the U.N. session would likely be in coming days, probably next week, and would see what concrete measures could be taken to improve the situation.

Despite events in Libya, Conde put the blame firmly on the European Union, accusing it of encouraging the Libyans to keep migrants in the North African country despite there being no government.

“What happened in Libya is shocking, scandalous, but we must establish the responsibilities,” said Conde. “In Libya there is no government, so the European Union cannot choose a developing country and ask that country to detain refugees (...) when it doesn’t have the means to do so,” he added.

“The refugees are in terrible conditions ... so our European friends were not right to ask Libya to keep the migrants. The European Union is responsible.”

Le Drian said he wanted the International Organization for Migration and the U.N. Refugee Agency to publish details about the trafficking of migrants in the country.

Libya splintered along political, ideological and tribal lines during and after a 2011 NATO-backed uprising that unseated former leader Muammar Gaddafi. In 2014 a battle for the capital led to rival parliaments and governments being set up in Tripoli and the east.