The French government on Friday announced that it was bringing forward by two hours a the nighttime curfew in 15 regions to help combat the coronavirus, as infections remain high. 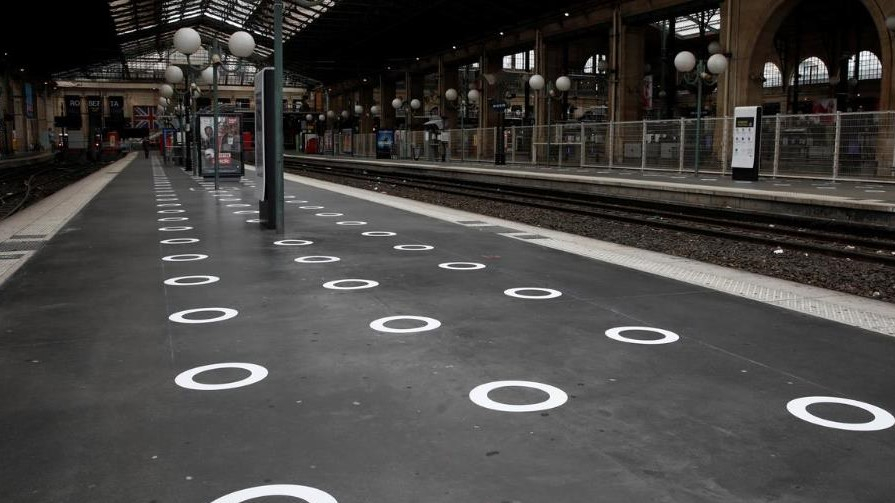 Plastic circles on the ground indicating where to stand to respect social distancing on a platform at the Gare du Nord train station during the COVID-19 outbreak in Paris, France, May 5, 2020. (Photo from CGTN)

The 15 of France's 101 departments affected by the switch to a curfew beginning at 6:00 pm rather than 8:00 pm include the Les Alpes-Maritimes department where the Mediterranean city of Nice is located.

The other areas are concentrated in the east of the country and Paris has, for now, been spared the additional restriction.

"The virus is continuing to spread in France... but with a disparity between regions," said government spokesman Gabriel Attal as he announced the move.

"If the situation were to deteriorate further in certain areas, we will take the necessary decisions," he told TF1 broadcaster.

The measure had been urged by mayors increasingly concerned that their local health systems are being overburdened by an influx of new cases.

Attal also confirmed that theatres, cinemas and concert halls would not be able to reopen from January 7, the most recent minimum date given for their closure.

Attal meanwhile defended the pace of France's campaign to vaccinate against Covid-19, which TF1 noted has seen just 332 people vaccinated in the country so far compared with over 130,000 in Germany since it began last weekend.

Arguing that France was targeting its campaign on care homes for the elderly which took more time, he said: "We are not going to judge a vaccination campaign that will last six months in just a few days".