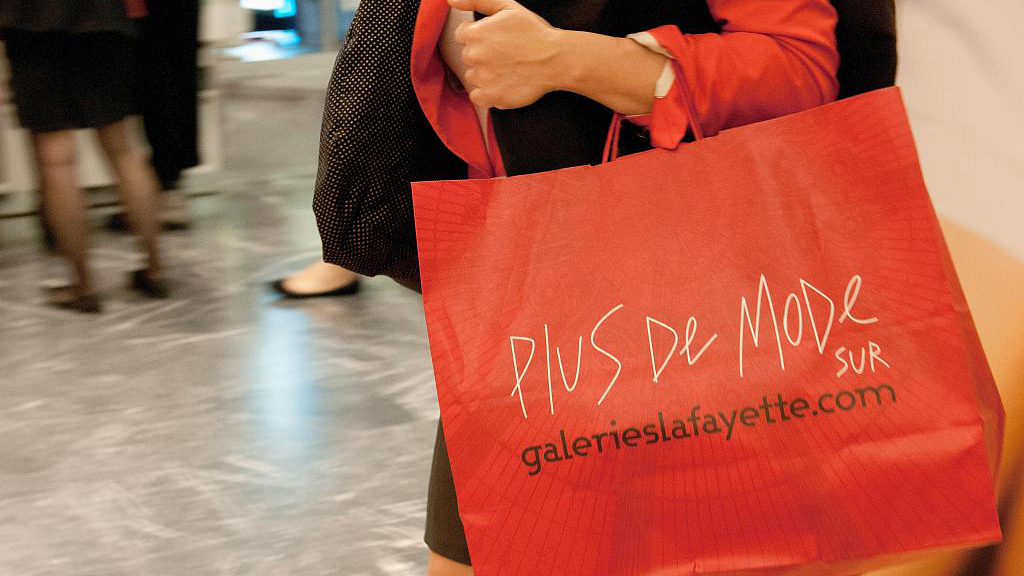 A woman with a shopping bag at Galeries Lafayette in Paris, France. (Photo: VCG)

France will make it illegal for consumer goods companies to destroy their excess inventory, a common but controversial practice, especially in the fashion world, in what the country's prime minister has called a "world's first."

The measure would ban brands and retailers from throwing away unsold or returned consumer goods, such as clothes, cosmetics and household appliances, and require them to hand such products in for recycling and reuse.

It is part of a sustainability drive in the country to develop the circular economy by cracking down on waste and promoting recycling.

"Basically, (circular economy) is a model of growth that relies on a fairly high degree of awareness in the use of natural resources," said Prime Minister Edouard Philippe on Tuesday as he announced the measure at a Paris discount store.

He added that the target of this model is to "avoid too much production, avoid waste and ensure that what has been used can once again become a primary commodity, in order to limit the impact of our ways of life, consumption, and production on our natural environment."

According to the French premier's office, more than 650 million euros (730 million US dollars) worth of new consumer products are destroyed every year in France.

"It is an unnecessary waste," Philippe said. "It's scandalous."

"Our idea is not to constrain or impose. It is to make sure we accompany companies in their management of inventory, their production, and their recycling of products," the official said.

The fashion industry is the world's second biggest polluter of water, and luxury brands have a long tradition of destroying their inventory to protect their image of exclusivity and prevent their merchandise from being sold for knockdown prices by unauthorized resellers.

Companies across the price spectrum have been called out for discarding good unsold products.

In 2017, a Danish television channel accused Swedish fast fashion retailer H&M of setting ablaze 60 tons of its unsold clothes since 2013. Last year, Swiss watchmaker Richemont, the owner of Cartier and Montblanc, admitted it had destroyed 500 million euros (around 563 million US dollars) worth of watches over the past two years, and Burberry said it got rid of clothes and cosmetics to the tune of 28.6 million pounds (36 million US dollars) – although the British luxury brand has since announced it is putting an end to this practice.

Paris-based Louis Vuitton has also been reported of junking unsold leather goods to stop them from getting in the wrong hands.

But it's not just fashion giants that stand accused of wastefulness. Separate media reports in Germany and France in the past year have documented "destruction zones" operated by online retailer Amazon, where unwanted products, from flat screen TVs and dishwashers to diapers and mattresses, are trashed.

The country is aiming for 100 percent recyclable plastic by 2025, reducing resource consumption in relation to GDP, and decreasing the amount of waste sent to landfills by 50 percent by 2025 from 2010 levels.

The measure announced on Tuesday will be discussed in the cabinet next month. It is expected to come into effect between 2021 and 2023.