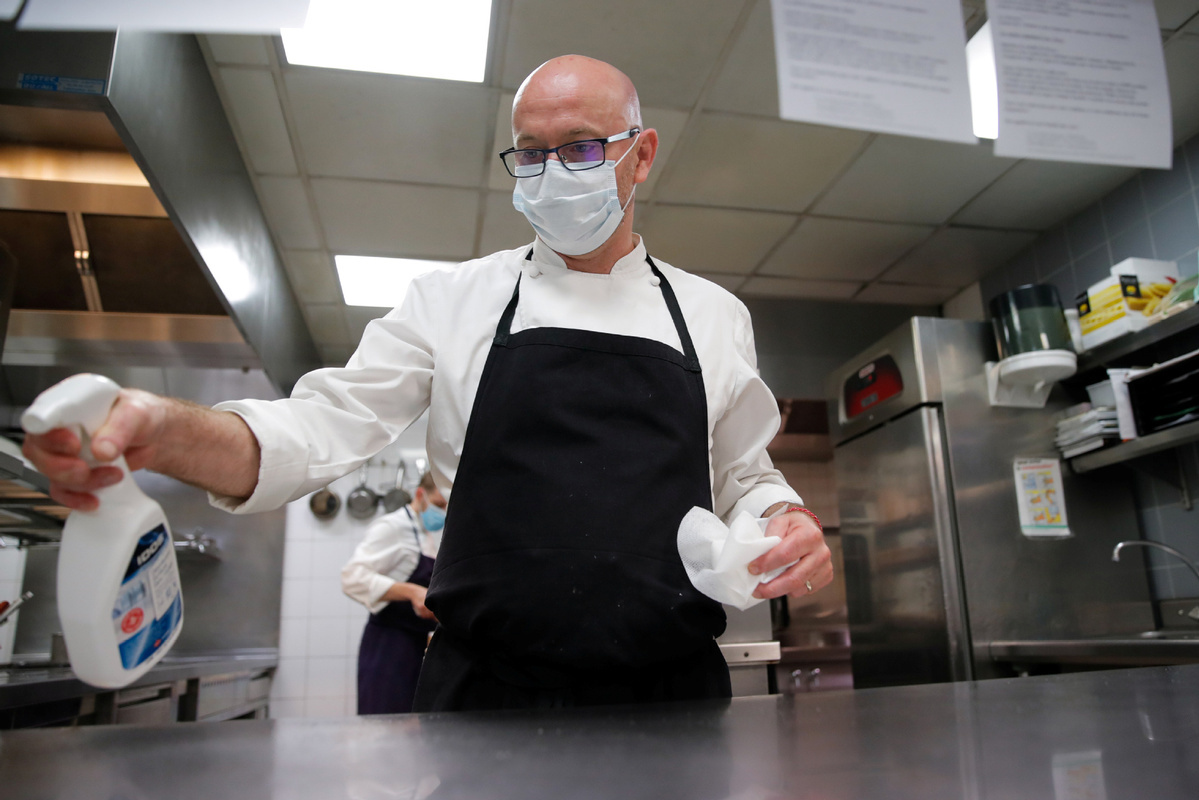 Chef Gilles Chesneau, wearing a protective face mask, disinfects the work table at Michelin-starred restaurant Le Chiberta in Paris before the announcement by the French government of more easing lockdown measures to allow the reopening of restaurants as soon as possible following the outbreak of the coronavirus disease (COVID-19) in France, May 27, 2020. (Photo: Agencies)

The French government has said it would make wearing a mask mandatory in most indoor workspaces by the end of the month in an effort to contain an alarming rise in COVID-19 infections.

The public health council has recommended obligatory masks in all workplaces as the country's daily infection count jumped past 3,000 for the first time since May.

The measure, likely to come into effect in time for the end of the summer holidays on Sept 1, will be accompanied by a reminder that home working remains the employment ministry's preferred option for most employees.

Health officials suggest that almost a quarter of new clusters have been linked to workplaces outside medical settings.

"The best thing we can do to prepare for the return from vacations is to reassure employees that, together, we are taking the precautions to avoid spreading the virus," said Elisabeth Borne, the minister of labor, employment and integration.

The mask warning comes off the back of a recent rise in cases, believed to be driven by young people.

"We have to systemize mask-wearing in all closed or shared workspaces," Borne said, suggesting that meeting rooms, corridors, change rooms and open-plan offices would all be included.

Until now, the French government has only advised the wearing of masks at work when social distancing is not possible.

The employment minister discussed the issue with union leaders on Tuesday and the new advice was expected to be published imminently. The government has been under pressure from trade unions to step up protective measures in time for September to try to stop a resurgence.

France has seen a sharp rise in cases since July and masks are already widely used. Its average number of new cases over seven days is now nearly 2,500, double what it was at the start of the month.

The country has already made mask-wearing obligatory on public transport and in enclosed shared public spaces, but has left their use in offices to the discretion of employers until now.

The latest measure follows updated advice on the risk of aerosol infections.

Underlining the hazards in all walks of life, the first game of France's top-flight soccer season has been postponed.

The match between Marseille and Saint Etienne, scheduled for Friday, was called off after a spate of positive tests at Marseille.

At least 37 players in France's Ligue 1 from 11 clubs have tested positive for COVID-19 in recent weeks.