WORLD France wrestles with the line between seduction, harassment

France wrestles with the line between seduction, harassment 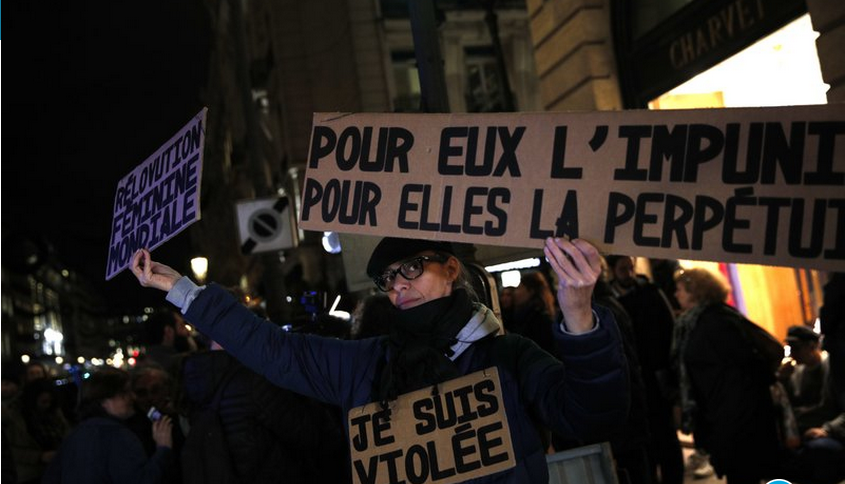 France is in a bind over where seduction ends and sexual harassment begins.

Since the allegations of rape and sexual harassment emerged against Hollywood film producer Harvey Weinstein, the country synonymous with love has been stumbling as it addresses the issue of sexual harassment and violence against women.

Some have wondered if France can address men’s behavior toward women without throwing out its Don Juan national identity.

“France is a country of men who love women,” Guillaume Bigot, who has written about the Weinstein fallout in France, told The Associated Press. “Seduction is a profound part of our national identity ... the culture of the ‘French lover’ and the ‘French kiss’ is in danger because of political correctness.”

Yet many women in France reject his viewpoint, favoring instead the thoughts of French feminist writer Simone de Beauvoir on the oppression of women.

Even before the hashtag #MeToo went viral, a cruder French version — #balancetonporc (“squeal on your pig”) — appeared online, prompting a deluge of anonymous accounts from women denouncing alleged abusers with unprecedented openness. It seemed to signal that France would lead the way in the fight against harassment, since the posts numbered in the hundreds of thousands and spoke of ubiquitous sexism and predation in France’s cultural, political and business worlds.

But so far it appears the Don Juanists have prevailed.

Although the accused include a former French minister, the former president of the Young Socialists party, a former TV news editor and the founder of a startup school, most have denied the allegations. More significantly, no powerful figures in France have lost their jobs or their reputations.

Philosopher Bernard Henri-Levy has criticized the online movement, saying it’s unfair to compare alleged attackers to “pigs.” And French defenders of seduction have warned against a puritanical, American-style backlash that could demonize romance.

Bigot pointed to France’s national symbol — the young, busty Marianne — as proof of France’s state-sponsored obsession with beautiful women, noting that in 1969, bombshell Brigitte Bardot was chosen as Marianne’s physical embodiment. Others chosen to represent her include siren Catherine Deneuve and supermodel Laetitia Casta.

French Culture Minister Francoise Nyssen, meanwhile, has provoked ire by defending director Roman Polanski amid calls to cancel a screening of his movies at a French cultural institute.

Nyssen urged the French “to not condemn the work” of the Polish-born director who in the 1970s pleaded guilty to having sex in the U.S. with a 13-year-old girl whom he plied with champagne and Quaaludes. The institute said its role was not to moralize.

This year, Polanski was even honored as president of the Cesar awards, France’s answer to the Oscars.

In another dispute, Justice Minister Nicole Belloubet provoked consternation by suggesting that a legal minimum age of 13 for sexual consent “is worth considering.” Activists protested in Paris to demand that the age of consent be set at 15.

For decades, the French have seen it as a point of honor to separate the public and private lives of French politicians and artists. Some say this has protected men such as former President Francois Mitterrand, who had a mistress and secret love child, and Dominique Strauss-Kahn, the former International Monetary Fund chief accused by a New York hotel maid of sexual assault.

Such perceived apathy has triggered an outcry from French feminists, who laud the U.S. outpouring against harassment and accuse France of having normalized sexism.

“Often in France, we hide behind the idea of gallantry for men. But this is constructed to make us hide the violence and think it is seduction,” said prominent feminist Caroline de Haas.

She called the French government’s response to the allegations of sexual harassment “radio silence” when compared with other countries such as Britain or the U.S.

French President Emmanuel Macron has urged women to speak out against sexual assault, and moved quickly to strip Weinstein of the Legion of Honor award he won for producing the Oscar-winning French film “The Artist.”

“We must change the whole way of thinking of our society. We must calm the impulses of domination that some men have, this sexual violence,” Macron said Friday.

But feminists say symbolic moves are not enough to combat the engrained sexism in France.

The author of a French essay on seduction had to spell it out in an interview with the Madame Figaro magazine last week that harassment is not seduction and is not ever a positive thing.

“A harasser is a predator, not a seducer,” said Gilles Lipovetsky.