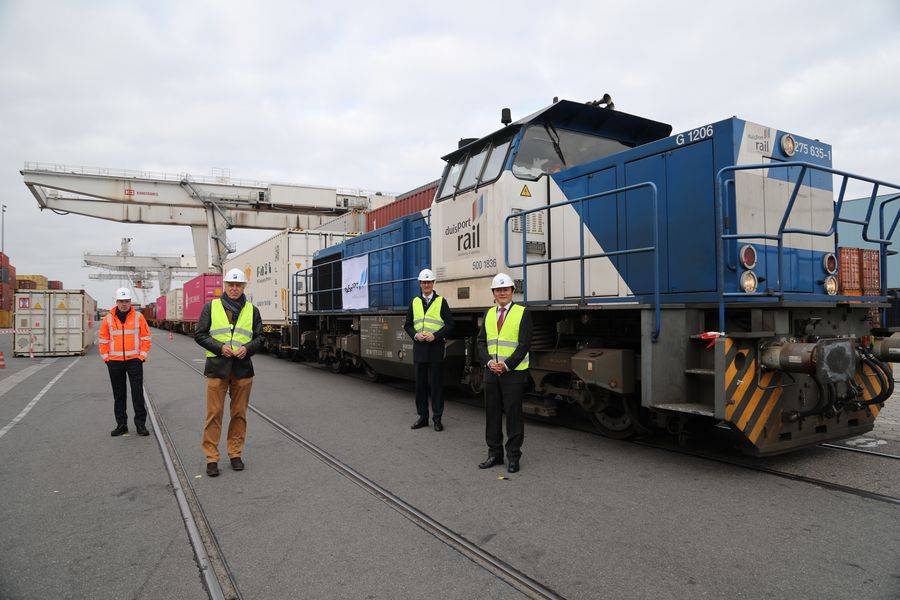 Chinese and German guests attend the welcome ceremony of China-Europe freight train from Wuhan of central China's Hubei Province, in Duisburg, Germany, April 14, 2020. (The Consulate General of the People's Republic of China in Dusseldorf/Handout via Xinhua)

This week in the western German city of Duisburg, after the arrival of a China-Europe freight train from Wuhan, once the epicenter of the COVID-19 outbreak in China, Chinese diplomats and local officials posed for a group photo while maintaining a safe distance from each other.

The train, which was loaded with medical supplies, auto parts, electronic products, and optical communication fibers, among others, was a stellar example of how China and Europe can stand together in the face of the COVID-19 pandemic and challenges posed by the contagious disease.

Around the time the train arrived in Germany, another two China-Europe freight trains, under the operation of China Railway Express, one departing from southwest China's Chongqing Municipality, the other setting out from the eastern Chinese city of Yiwu, also rumbled across the Eurasian continent and arrived in Europe.

Since it resumed intercontinental train service on March 28, Wuhan, the capital city of the central Chinese province of Hubei, has seen the departure of four freight trains, loaded with 195 containers of goods for Europe.

According to Wuhan Asia-Europe Logistics, the operator of the trains in Wuhan, their loading rate is above 98 percent, and the goods, including face masks, surgical gauze and first-aid kits, were transported and then distributed to Germany, France, Hungary, the Czech Republic and Poland.

Gao Ruorui with the Wuhan operator said 90 percent of medical goods carried by the freight trains from Wuhan were produced by enterprises in Hubei, which have gradually resumed business after a lockdown to stem the virus's spread.

"In order to help Europe's fight against the pandemic, we have kept the transport price flat as that in the same period of last year," said Gao. "We will increase the shipment frequency according to the international market's demand, and help keep the global industrial and supply chains stable."

Trains from other parts of China have also been running steadily, with increasing transport frequency and volume, helping sustain international trade and global supply chains in tough times.

On Sunday, the "China Post" train, launched from Chongqing, arrived in Lithuania, opening a new logistics channel between China and Europe. By Wednesday, a total of 107 China-Europe freight trains had departed from Yiwu this year, which boasts the world's leading small commodities market in east China's Zhejiang Province.

Statistics from China Railway Group Limited showed that the first quarter of 2020 saw 1,941 China-Europe freight trains traveling from or to China, carrying 174,000 TEU containers, which represented growth rates of 15 percent and 18 percent, respectively, year on year. In March alone, a total of 809 freight train trips were made, delivering 73,000 TEU of goods, both setting monthly high records.

On April 8, mobile cranes loaded containers onto a cargo train at Shenyang East Railway Station in Shenyang, capital of northeast China's Liaoning Province. Along with regular cargoes including machinery and small commodities, the train, destined for Germany, was also loaded with 200,000 sets of medical protective suits.

"Due to the epidemic, air freight is now facing strict restrictions and road freight came to a halt" in efforts to curb the contagion risk, said He Ruofan, a manager with the Shenyang branch of China Railway Container Transport, the company in charge of the China-Europe freight train operation. "Under such circumstances, the freight train is now favored by many enterprises as the most economical means of international transportation."

Likewise, Juergen Friedrich, chairman and CEO at Germany Trade & Invest (GTAI), said that demand for train services to Europe has recently increased, as airfreight and shipping services are restricted.

As analysts have said, the short transportation time is also a significant strength of the China Rail Express, especially under the current conditions where certain materials, especially medical equipment that is critical for saving lives, require rapid delivery.

What made this possible is China's efforts to extend a helping hand and to restore and raise the production capacity of medical and anti-epidemic supplies.

Carlos Santana, who is responsible for the company which operates the Yiwu-Madrid line in Spain, told Xinhua that return to work in China and the increase in industrial activity have made it easier for the materials needed to fight the pandemic to arrive in a safe and rapid manner.

Train transport between China and Spain is a reliable alternative means of transport that is cheaper than shipping by air, and faster than cargo vessels, Santana added.

During the welcome ceremony of the train from Wuhan in Duisburg, Transport Minister of the State of North Rhine-Westphalia Hendrik Wuest said that as people in Germany are also suffering from COVID-19, a steady restoration of normalcy is needed.

Therefore, the supplies transported from China by rail, especially medical ones, are of great significance, he added.

For Erich Staake, chief executive officer of Duisburger Hafen AG (duisport), the China-Europe freight train has also helped to further promote cooperation in the logistics field and promote the economic development of both sides.

Meanwhile, in a letter to Chinese Ambassador to Lithuania Shen Zhifei, the Lithuanian Minister of Transport and Communications Jaroslav Narkevic wrote that the train of a new postal rail service to Europe will bring new impetus for the further strengthening of a versatile partnership between the two countries.

"With this new route, especially during a difficult pandemic period, we are turning a new page towards closer cooperation to meet consumer expectations," wrote the minister.

Even before the coronavirus pandemic, the China-Europe freight service, as an important component of the Belt and Road Initiative (BRI), has long been promoting global inter-connectivity, a function that industry insiders predict will continue.

The interest of German companies, first and foremost from Duisburg, in the railroad transport between China and Germany will also continue after the coronavirus crisis, and enhancing transport routes will remain an important topic in the future, Friedrich said.

China's engagement in the BRI will also induce the development of additional infrastructure initiatives on the part of other countries and regions in the future, which will additionally contribute to enhanced connectivity between China and Germany, he added.