Thousands of people on Sunday queued in Paris to bid a final farewell to France's former president Jacques Chirac, fondly remembered as a charismatic giant of domestic and international politics despite a mixed legacy. 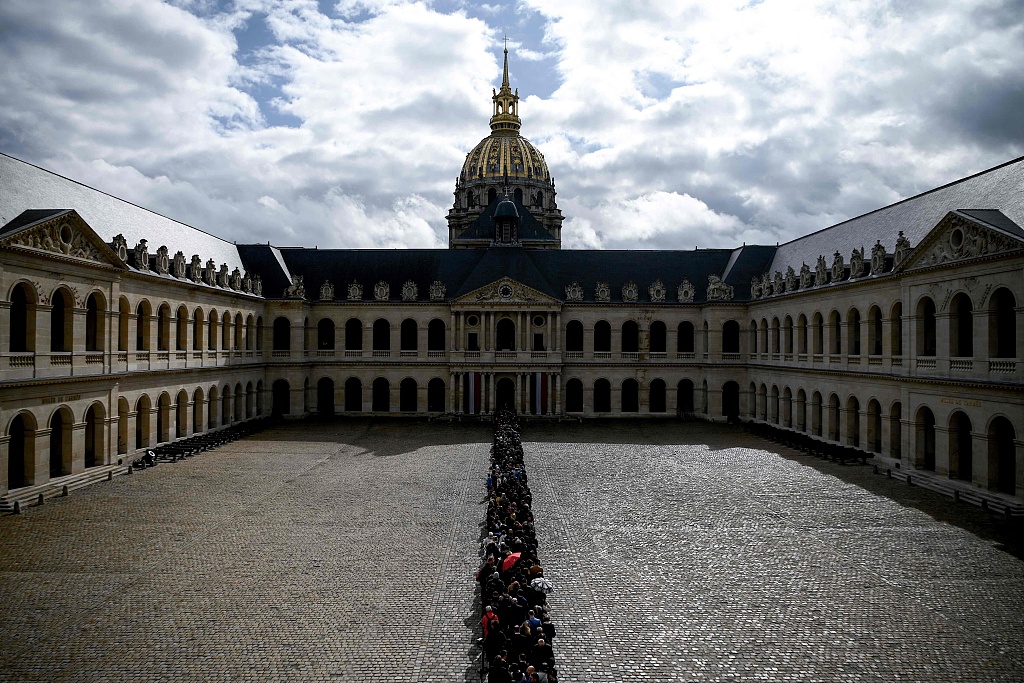 People queue to say a final farewell to former French President Jacques Chirac as the coffin lie in state at the Saint-Louis-des-Invalides cathedral at the Invalides memorial complex in central Paris on September 29, 2019. (Photo: VCG)

A massive queue snaked round the Invalides complex to pay homage at Chirac's coffin ahead of a national day of mourning on Monday and a memorial service expected to be attended by dozens of world leaders.

Chirac's death on Thursday aged 86 prompted a flood of tributes to a man whose high-profile political career spanned three decades capped by 12 years as president from 1995-2007.

But it also sparked questions about how much this consummate political operator had actually achieved during a long spell in office and again threw the spotlight on a 2011 conviction for graft over his time as Paris mayor.

Nevertheless, a poll in Le Journal du Dimanche newspaper showed that the French consider him to have been their best president of the modern era, alongside Charles de Gaulle.

An initial multi-faith prayer service was held around the coffin in the Saint-Louis-des-Invalides cathedral at the Invalides memorial complex with close family, including his daughter Claude.

His wife of six decades Bernadette, 86, was however unable to attend.

Members of the public were then allowed in to view the coffin, draped in a French flag and flanked by a picture of a waving Chirac.

Thousands lined up in a queue that wound around the Invalides complex, where Napoleon Bonaparte is buried, for almost a kilometre, braving the rainy weather and the prospect of a long wait.

"Adieu president, we miss you already," read one placard in the crowd.

"Chirac represented a certain era," said Marin Menzin, 21. "If he had seen the queue today, he would have jumped into the crowd to shake hands."