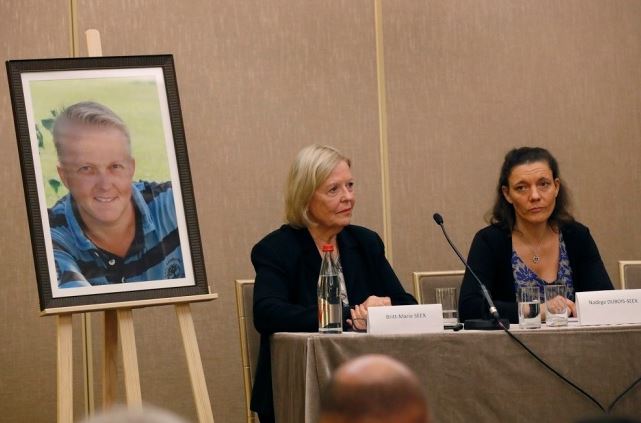 Britt-Marie Seex, the mother of American victim Jonathan Seex of the Ethiopia plane Crash, sits next to a photograph of her son with the widow Nadege Dubois-Seex, right, during a press conference about a lawsuit against American plane maker Boeing in Paris, Tuesday, May 21, 2019. (Photo: IC)

Two French families have filed lawsuits against US aircraft manufacturer Boeing over the crash of a 737 MAX of Ethiopian Airlines in March, lawyers said on Tuesday.

The March 10 crash of the plane, which was flying from Addis Ababa to Nairobi, killed all 157 people on board including seven French citizens.

The crash came after another Boeing 737 MAX of Indonesian company Lion Air crashed in October, killing 189 people on board.

The first complaint, filed in Paris by a family of one of the French victims, refers to the Lion Air crash and says that "technical failure could not have been ignored" by the manufacturer and other actors involved in constructing the aircraft.

It accuses Boeing of "involuntary homicide". French magistrates are probing the disaster, as is customary when any French citizen is killed abroad.

Boeing acknowledged Saturday it had to correct flaws in its 737 MAX flight simulator software used to train pilots, after the two deadly crashes involving the aircraft that killed a total of 346 people.

Boeing's statement about the flight simulator marked a first acknowledgement of a shortcoming since the two accidents led to the grounding of the top-selling 737 MAX plane. The plane's MCAS anti-stall software has been blamed in large part for the Ethiopian Airlines tragedy.

"We did not wait for Boeing's confessions over the existence of faults to seek the penal responsibility of the manufacturer," said Yassine Bouzrou, the lawyer of the family. The complaint was filed in April but is only being made public now.

"Boeing's very grave behaviour will only be resolved through the path of seeking compensation," added the lawyer.

Meanwhile, Frenchwoman Nadege Dubois-Seex, whose husband Jonathan died in the crash, filed a suit against the company in Chicago where the company's headquarters is located.

Along with Jonathan's mother, Britt-Marie Seex, she argues that Boeing failed to take the necessary measures after the Lion Air accident as the group feared negative financial repercussions if the reputation of the plane was tarnished.

"They knew, they were aware, they could have avoided this accident... This plane should never have taken off," Nadege Dubois-Seex told reporters in Paris on Tuesday.

They are claiming $276 million in damages, according to the text of their suit which was seen by AFP.

"We believe that the evidence in this case will clearly demonstrate that Boeing acted recklessly, wilfully and with conscious disregard to the safety of its passengers," their lawyer Nomaan Husain told a press conference in Paris.

He accused the manufacturer of putting "profit over safety".