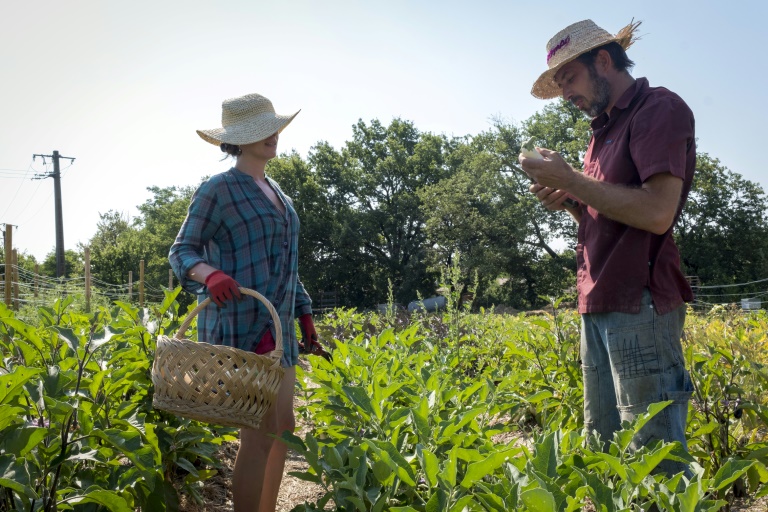 Trainees learn the skills of farming at the Hundredth Monkey Farm, where aspiring farmers can benefit from the same type of coaching and shared resources that many hi-tech startups get from business incubators or coworking.(Photo: AFP)

They bandy about terms like "co-working" but instead of coding and developing algorithms in open space offices they work out in the open trying to tease tomatoes from the soil.

Welcome to the Hundredth Monkey Farm where aspiring farmers can benefit from the same type of coaching and shared resources that many hi-tech startups get from business incubators or co-working.

The name pays homage to the hundredth monkey effect, the concept that an idea or behaviour will spread rapidly once it is adopted by a critical mass.

This farm in Belberaud outside the southern French city of Toulouse is seeking to promote a "more sober, more durable" alternative to industrial farming, one that is adapted to small holdings.

And its "monkeys" aren't necessarily born into farming.

Sacha Danjou, 25, is a former aeronautical engineer learning to manage a farm.

"Being a farmer, it's a different world that touches on a lot of different areas: biology, management, accounting." he said standing amongst rows of tomatoes, peppers, eggplants and other vegetables.

"When you are not part of it, it's difficult" to get started, he added.

The tractors and tillers alone cost around 40,000 euros. Adding that to the cost of land shows how setting up a farm is a costly endeavour.

"The risk is there when you start," said Danjou.

"You buy, you have huge costs, you need to generate a certain amount of sales from the first year, you can't make any mistakes," he said as he worked the soil. "Without experience, it's scary."

Amandine Largeaud, one of the founders of the Hundredth Monkey Farm, calls their model "agricultural co-working".

Co-working emerged a decade ago as an option for freelance employees and internet startups, where renters share not only office space but form a community where they can share experience and expertise.

Largeaud acknowledged some might find it surprising applying the concept to the fields, but "it's like office co-working, actually. We simply share the spaces and tools."

In 2016, after several years in the solidarity economy, she joined up with 11 other people to launch the Hundredth Monkey Farm on a 19th century holding of five hectares.

Largeaud noted that as the French agricultural system is based on handing down land and skills through families, it is difficult for outsiders to break into the sector.

"When you want to get started you don't realise how much paperwork there is and the different agencies that you need to deal with," said Danjou. "You don't learn that overnight."

That is why the Hundredth Monkey Farm is also a business incubator, offering aspiring farmers training and coaching as well as some administrative and legal assistance.

The aspiring farmers all sign a special type of pact that guides associations in France which help entrepreneurs that define what help they receive and as all have been recognised by the authorities as switching professions, they continue to receive unemployment benefits or payments for low-income workers.

'Fruit of my labour'

So far the Hundredth Monkey Farm has accepted six projects, including raising vegetables, snails, and aquaponics where plants and aquatic animals are raised together.

After the initial one-year period, the projects can be renewed for up to two years.

Largeaud said that before starting the farm she was struck by how many unhappy employees wanted to retrain to work in the farm sector.

That was the case for Danjou.

"I wanted a job that satisfies me, with the power to make decisions, far away from a gargantuan hierarchy," he said. "I want to see the fruit of my labour."

They may not have reached their hundredth monkey, but the idea of a farmer incubator appears to be catching on.

The farm has more than a dozen candidates, and Largeaud said she has been helping people seeking to create similar incubators elsewhere in France.