The French government on Thursday summoned the head of the Orange telecom operator after a network outage that left people unable to reach emergency services, possibly causing three deaths. 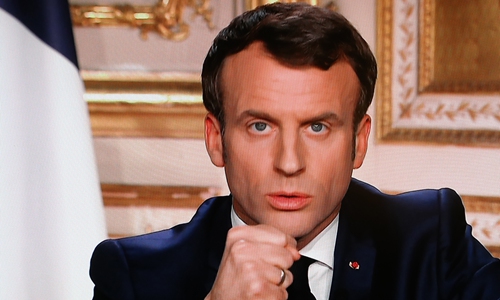 French President Emmanuel Macron is seen on a television screen as he speaks during a televised address to the nation on the outbreak of COVID-19, caused by the novel coronavirus on Monday in Paris. (Photo: AFP)

A person in the western Morbihan region suffering from a heart condition was reported dead after failing to put through an emergency call during the outage which lasted for several hours on Wednesday, Interior Minister Gerald Darmanin said.

While it was not certain that the death was caused directly by long delays in getting through, "what is beyond doubt is that people have told us that they tried calling several times and that they couldn't get an operator immediately," he told reporters.

Two people with heart conditions in the overseas territory of La Reunion were also reported dead.

Calling the outage a "serious and unacceptable malfunction," Darmanin said that Stephane Richard, the CEO of Orange which is France's biggest telecom company, had been summoned early Thursday to his ministry "to tell us the current state of play."

The government said many emergency call centers for medical services, police and firefighters across the country could not be contacted Wednesday evening due to a telecom maintenance problem.

Health Minister Olivier Veran said the incident caused "fairly random breakdowns, with up to a 30 percent drop in some regions." He recommended that people call local numbers.

Orange told AFP that a "technical incident on a router had greatly disrupted VoIP [voice over internet protocol], internet calls in some regions."

A source close to the matter ruled out any kind of "hacking."

Apologizing for the incident, Orange said Wednesday its teams had identified the problem and were "fully mobilized to restore services as soon as possible."

On Thursday, the operator said the network had been up and running again since midnight but was still being monitored while alternative emergency numbers remained available.

Problems were reported across the country from 6 pm, causing havoc for emergency services.