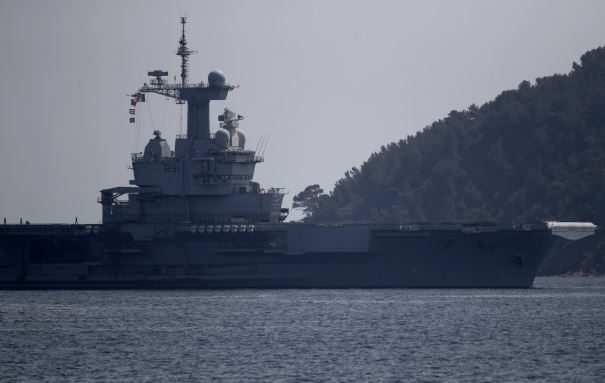 The French Navy is investigating how the coronavirus infected more than 900 sailors aboard the aircraft carrier Charles de Gaulle, which is undergoing a lengthy disinfection process since returning to its home base in Toulon five days ago.

One person remains in intensive care and some 20 others hospitalized, Navy spokesman Commander Eric Lavault said in an interview Friday.

He insisted that the aircraft carrier’s commander sought to increase the physical distance among the crew on the vessel, where there was no testing equipment and for most of its three months on operations, no masks.

It is “very difficult to apply social distancing measures … on a combat vessel,” Lavault said. But “security of the crew is the first concern. A combat ship, especially an aircraft carrier, is nothing without its crew.”

A similar outbreak on the USS Theodore Roosevelt and a dispute about how the at-sea health crisis was handled led to the firing of its captain and the resignation this month of the acting US Navy secretary. The French navy has been spared a controversy over assigning blame so far.

The director of the French military’s health service arm, Maryline Gygax Genero, told a parliamentary commission Friday that 940 people have tested positive so far and 645 negative among the 2,300 sailors in the aeronaval group, which included several escort vessels. Other results were not yet available.

Two of four Americans aboard the Charles de Gaulle as part of an exchange program also tested positive, a US Navy statement said this week. A British sailor was aboard another vessel, Lavaux said, refusing to reveal the sailor’s health status.

An investigation to retrace the paths of personnel in the French aeronaval group is in progress. Lavault noted that the aircraft carrier made a call in the French port of Brest, on the Atlantic Ocean, had been in the North Sea as part of a “naval diplomacy” mission with NATO partners, and had stopped in Cyprus during an operation in the eastern MediterraneanSea to join in the fight against the Islamic State group.

Journalists had boarded the vessel at one point.

“All hypotheses are on the table,” the spokesman said.

So far, 350 crew members have been grilled about their movements on and off the vessel, according to Lavault.

With nearly 2,000 sailors on the aircraft carrier, there is a constant flow of people frequenting the infirmary. In the North Sea, temperatures sometimes dropped to -5 degrees Celsius (23 F), he said.

The number of infections “rose exponentially” from about April 4-5, and lung scans were taken on suspected cases, Lavault said.