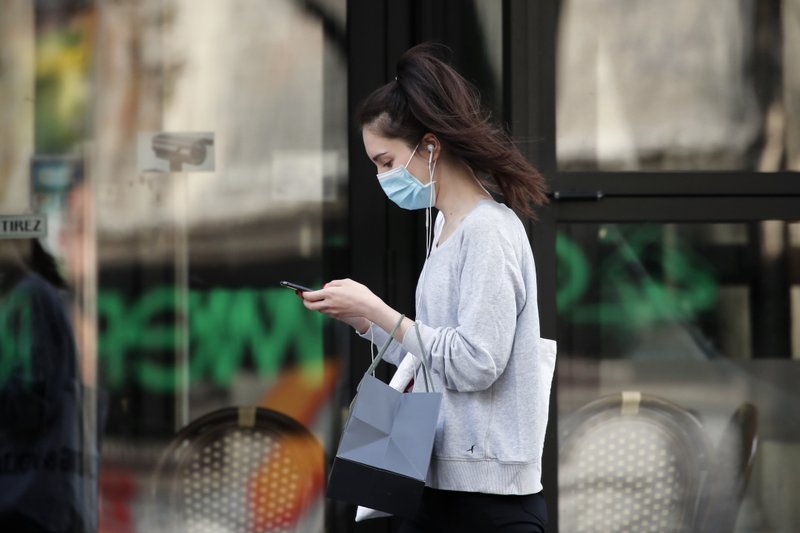 FILE - In this photo taken on April 20, 2020, a woman wearing protective face mask looks at her phone past a closed restaurant during a nationwide confinement to counter the COVID-19, in Paris. French lawmakers are set to vote on whether allowing or not France's contact-tracing app designed to contain the spread of the coronavirus that is raising privacy concerns. (Photo: AP)

France’s lower house of parliament endorsed Wednesday a contact-tracing app designed to contain the spread of the coronavirus amid sharp debate over privacy concerns.

Lawmakers in the National Assembly, where French President Emmanuel Macron’s centrist party has a majority, voted 338-215 to approve the StopCovid app.

The vote, while non-binding, is expected to clear the way for the app to be made available to users on a voluntary basis starting Monday. The government had committed to honoring the position lawmakers took.

French privacy watchdog CNIL backed the app this week, stating the technology “won’t lead to creating a list of infected people but only a list of contacts using pseudonymous data. It does respect the concept of data protection.”

Governments around the world are scrambling to develop smartphone tracing apps as part of measures aimed at keeping a lid on fresh Covid-19 outbreaks as they ease lockdown restrictions. About two dozen countries, including many European ones, are building apps based on a new mobile software interface jointly developed by U.S. tech giants Google and Apple. France decided to use its own system.

Health authorities have cautioned that tracing apps alone aren’t an effective method to limit infections and should be used to support conventional but time-consuming manual contact tracing, which involves workers interviewing people who test positive for the virus.

The French app uses low-energy Bluetooth signals on mobile phones to trace individuals that people infected with the virus come into close contact with and informs users of potential exposure so they can self-isolate. It will store anonymous data in a government-run centralized database for 14 days before erasing it.

The government says the app doesn’t involve location tracking and it guaranteed the privacy of users.

“No one knows where the person went,” Justice Minister Nicole Belloubet said. “We only know that some people came close to each other at some point.”

But civil liberties groups have raised concerns over the issue, over fears it could lead to increased surveillance.

A public agency that monitors the respecting of human rights in France, the National Consultative Commission for Human Rights, said in a statement Tuesday that the app “affects in a disproportionate manner the rights and freedoms of all citizens.”

An advocacy group for internet users’ rights, La Quadrature du Net, said that “deploying an app whose objectives, technology and usage carry significant risks for our society and our freedoms, for likely mediocre results (possibly even counter-productive ones), is not something we can consider acceptable.”

Opposition lawmakers from the left and the right voted against the app.

The head of the conservative group in the French National Assembly, Damien Abad, questioned the efficiency of the app, saying it is being introduced too late. However, he said the decision for lawmakers involves “primarily an ethical discussion rather than a technical and legal one.”

“I don’t want a society where individual freedoms and privacy are pushed aside,” he said.

The debate was to set to move to the Senate later Wednesday.

Initially meant to accompany the lifting of restrictions starting on May 11, the app’s release was delayed due to technical issues.

The junior minister in charge of the digital economy, Cedric O, said the app was tested on 100 smartphones representing 17 brands and will be available to work with Google Android devices and Apple iPhones.

“It’s working well and doesn’t drain the battery,” he said.

European countries have chosen different approaches to developing their own tracing apps as part of their strategies to prevent a second wave of virus cases after national lockdowns end.

Germany, Italy, Austria, Estonia, Switzerland, and Ireland are embracing a “decentralized” approach, widely preferred by researchers and privacy experts because anonymous identifier codes for contacts are kept on devices only.

France and the U.K. decided instead to send data to a central server, in which the user’s identifier code as well as those of other people are uploaded. Officials say this would help them react more quickly to virus flare-ups and aid decision-making.

“The government believes that health protection of the French is an exclusive mission for the state and not for private international actors,” it said in a statement.

France, one of the world’s hardest-hit countries, has reported at least 28,530 coronavirus-related deaths.