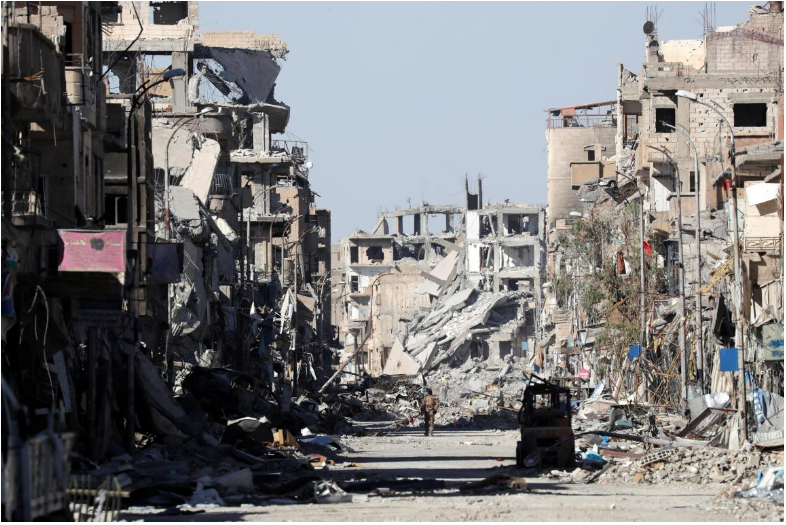 A fighter of Syrian Democratic Forces stands amidst the ruins of buildings near the Clock Square in Raqqa, Syria October 18, 2017. REUTERS/Erik De Castro     Photo: Reuters

The coalition had also been unable to launch air strikes against the fighters because they had mingled with civilians, French army spokesman Patrik Steiger said.

A report by BBC television on Sunday said some 4,000 people, including hundreds of foreign nationals, had been evacuated from Raqqa as part of the agreement and spread across Syria and as far as Turkey.

Ankara on Tuesday said it was appalled by the approach of the U.S. Department of Defense toward the agreement, struck between the Syrian Democratic Forces (SDF) -- a U.S.-backed alliance of Kurdish and Arab militias -- and Islamic State.

“The coalition was not ... for this agreement which enabled Islamic State terrorists to escape without being chased,” Steiger told reporters in a weekly briefing.

“It (the convoy) was monitored by drones, (but) the terrorists were mixed in with the population which prevented air strikes being carried out.”

France has contributed to strikes against the jihadist group in Syria and has special forces operating in the Raqqa region.

Coordinated attacks planned by militants in Raqqa in Paris in November 2015 were the deadliest on French soil since World War Two, killing more 130 people.

With Islamic State losing ground in Iraq and Syria, hundreds of French citizens belonging to Islamic State - and in some cases their children - have started to return to France, officials there say.

The BBC report showed one witness claiming that French jihadis were among those allowed to leave Raqqa in mid-October and one suspected militant was recorded saying some French fighters “were heading back to France to carry out attacks.”

At the time an SDF spokesman said 275 Syrian militants left along with their family members, but denied foreign fighters had also left.

Seeking to allay concerns, French Interior Minister Gerard Collomb said on Wednesday the threat of an attack was no greater than over the last two years and security services were either arresting or monitoring all those who returned to France.

About 400 men, women and children had returned so far. “There is no massive return. We think that 700 people are still in the zone,” he said, referring to French nationals or those who had resided in the country in the past.