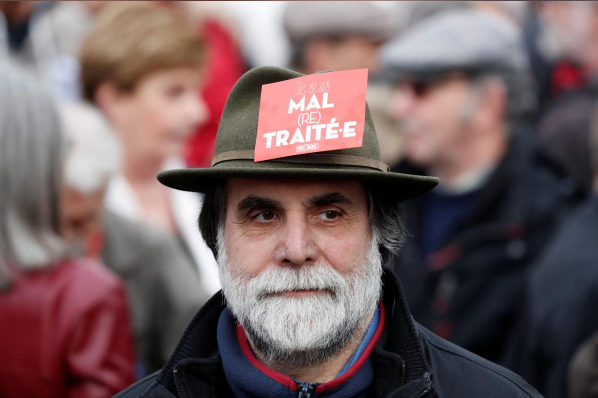 A protester attends a demonstration during a pensioners nationwide protests against tax increase in Paris, France, March 15, 2018. (Photo: Reuters)

Thousands of French pensioners marched through Paris and other cities in protest over higher social security taxes on Thursday, in a warning to President Emmanuel Macron whose popularity is falling in a key voter constituency.

The ebbing support for Macron among retired workers was a factor in the by-election defeat his party suffered last month, just eight months after winning the seat, underlining the challenges he faces with no traditional power base.

Pensioner discontent is a delicate issue for the former investment banker: France has some 15 million pensioners who typically vote in higher numbers than others.

“We’ve had enough of being bled dry the whole time,” said 75-year-old Mado Gurard who voted for Macron last May. “Us retired people, we vote. He has to listen to us.”

Three in every four pensioners voted for Macron in the second round of last spring’s presidential election. An Ifop survey this month showed support for Macron had fallen to 53 percent among their demographic.

Macron, who promised to revive a sluggish economy and clean up politics, campaigned before his election to increase the CSG tax which helps finance social welfare payments. 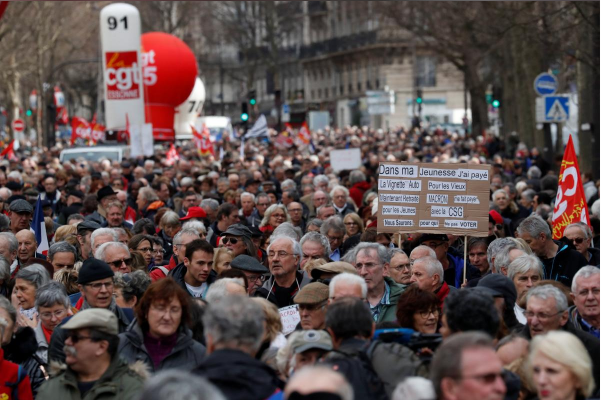 Nonetheless, many pensioners complain they have been hurt by a package of other tax increases, such as on diesel, and social welfare reductions, including on housing aid. Meanwhile the government has scrapped a wealth tax and is cutting corporate tax, leading to accusations from rivals that Macron is a “president of the rich”.

So far Macron has shown no sign of changing tack.

“I ask you to make an effort to help me relaunch the economy, for the youths,” Macron told a pensioner complaining about the tax increase during a visit to Tours on Wednesday.

Macron and his government say the increase in CSG taxes, in essence a tax on income, including pensions above 1,200 euros per month, was necessary to offset cuts to company payroll charges and housing taxes.

“Everything he is doing, it’s very unfair. I once liked the idea that he is neither of the left nor right. But everything he does is right-wing,” said Simone Roger, 71, adding she would not vote for Macron again.

The government estimates 20-25 percent of pensioners will be a few dozen euros worse off each year compared with before the tax changes, while the wealthiest of them may see their spending power fall by several hundred euros annually.