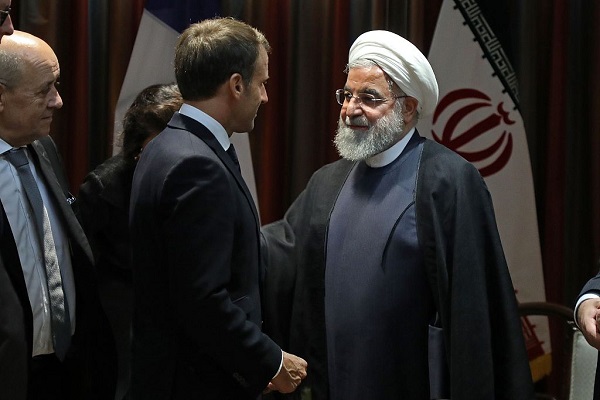 "More than ever, I sincerely and profoundly believe that the time has come to resume negotiations between the United States of America, Iran, the signatories to the JCPOA and the (affected) countries of the region," Macron told the UN General Assembly, using the initials of the formal name of the July 2015 Iran nuclear deal.

The goal of the renewed talks would be: first of all, the certainty that Iran never acquires and develops nuclear weapons; second, a solution to the crisis in Yemen; third, a regional security plan, which also incorporates the other crises of the region and security of maritime navigation; and finally, a lifting of economic sanctions, he said.

He noted that after the U.S. withdrawal from the 2015 agreement, he proposed a global framework that would make it possible to preserve the nuclear deal and to complement it with a more expanded approach dealing with issues arising from the Iranian nuclear program and its ballistic missile programs.

"I'm not naive at all. And I don't believe in miracles. I believe that it takes courage to build peace."

Macron said he had believed all along that the strategy of pressure on Iran over its nuclear program could only lead to an increase in tensions in the region.

He also mentioned the recent attack on Saudi oil facilities, which was claimed by Yemen's Houthi rebels but was blamed on Tehran by Washington and some of its allies.

"Today, we have a risk of a serious conflict based on a miscalculation or a disproportionate response. Peace is at the mercy of an incident of miscalculation. And the consequences for the region would be very serious -- too serious for us to live on the edge of a cliff," said the French president.

He asked the United States and Iran to show courage for peace. Macron was one of the European leaders trying to broker a meeting between U.S. President Donald Trump and Iranian President Hassan Rouhani, both of whom are in New York for this week's General Debate of the UN General Assembly.