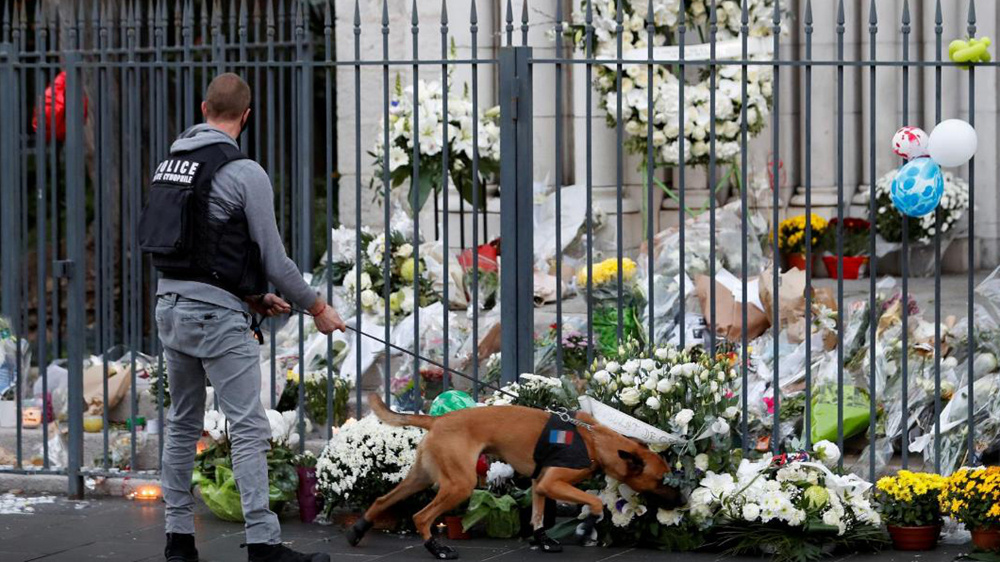 A police officer with a sniffer dog check flowers in front of Notre-Dame Basilica, before a mass to pay tribute to the victims of a deadly knife attack in Nice, November 1, 2020.(Photo: agencies)

The man suspected of knifing to death three people in a church in the French city of Nice had on his telephone pictures of the man who beheaded a middle school teacher near Paris 13 days earlier, prosecutors said on Friday.

The discovery of the photos on the phone of 21-year-old Tunisian Brahim al-Aouissaoui, who was shot and wounded by police in the October 29 attack, could indicate a common motive behind the two attacks.

The middle school teacher, Samuel Paty, was killed by a young man of Chechen origin who, before the attack, recorded a message saying he wanted to punish Paty for showing pupils caricatures of the Prophet Mohammad during a civics class.

The attacker, partially identified by prosecutors as Abdoulakh A., was shot dead.

It was the latest in a series of violence spanning several years in France linked to the cartoons. Muslims see them as blasphemous, while French officials have defended the right to publish them, saying it is a matter of freedom of expression.

Until now, the only connection prosecutors had drawn between the Paris attack and the Nice church attack was the method employed. In both cases, the attackers used a large knife and beheaded, or tried to behead, their victims.

The knife attack in Nice prompted the government to raise the security alert for all French territory to its highest level and President Emmanuel Macron said more soldiers would be deployed to protect key sites such as places of worship and schools.

France and Germany pushed on Tuesday to tighten European Union borders to head off what Macron called the "threat of terrorism" after suspected Islamist militants killed eight people in Paris, Nice and Vienna within a month.