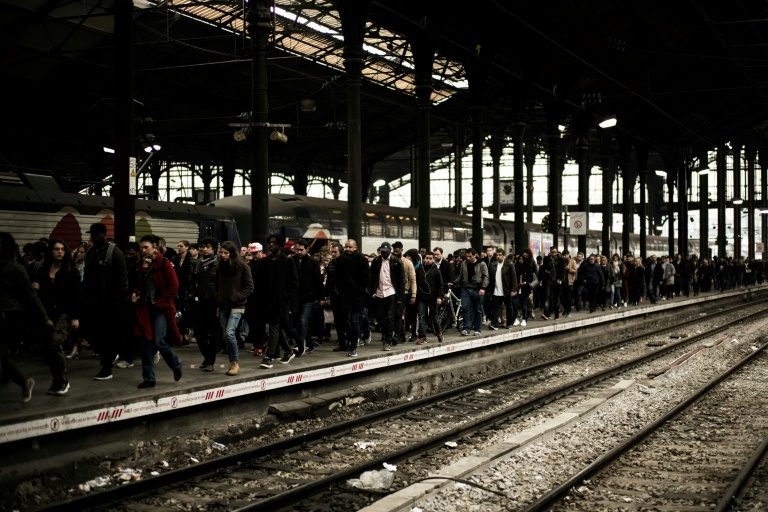 Both sides in the dispute are claiming broad public support (Photo: AFGP)

France's rail operator said Monday that the rolling strikes against plans to overhaul the debt-laden company had already cost it around 100 million euros ($123 million) as the standoff between unions and the government drags on.

Train drivers and other staff at the state-owned SNCF have vowed to continue walking off the job two days out of every five until at least June 28 unless the government backs down on its reforms.

The stoppages so far are costing around 20 million euros per strike day and the disruption often spills into non-strike days, SNCF chief Guillaume Pepy told BFM television on Monday, the fourth day of the walkout.

"From what I can see, France has not been paralysed," Pepy said, "but clients are being heavily penalised."

Both sides are claiming broad public support. An Ifop poll published Sunday showed 62 percent in favour of the government's reforms, compared with a slim majority of 51 percent in the same survey a week earlier.

Yet unions point to the nearly 530,000 euros in donations raised as of Monday morning via a web-based fund for compensating strikers' lost wages.

"Nobody wants a long, difficult conflict but for now, we're up against a wall," Philippe Martinez of the CGT union, the largest at the SNCF, told Europe 1 radio.

"The government has forced us to take this type of action."

President Emmanuel Macron, who has barely spoken publicly on the standoff, is set to give an hour-long televised interview Thursday, nearly a year after sweeping away France's traditional parties with his election victory.

The 40-year-old centrist, who is pushing reforms to swathes of the French economy, will also appear for a two-hour primetime interview on Sunday night, facing journalists from BFM and the hard-hitting investigative news site Mediapart.

Parliament is scheduled to begin debating the SNCF overhaul on Monday, though Macron has said he will implement the changes by decree -- another bone of contention for unions.

The government says it needs to move quickly ahead of the opening of French passenger rail traffic to competition starting in 2020, part of an EU-wide opening of state rail markets.

Unions are protesting a plan that would do away with the jobs-for-life and early retirement guarantees enjoyed by current rail employees.

The SNCF would also be transformed into a private company whose shares are owned by the state -- which unions see as a first step toward privatisation, despite government denials.

The standoff promises weeks of headaches for the network's 4.5 million daily passengers.

Just one in five high-speed TGV trains were running Monday, compared with one in seven or eight during last week's strikes, and about 20 percent of the Eurostar trains in and out of London have been cancelled.

Pepy noted "quite heavy participation" for the strike on Monday, "though there are more trains than last time".

He also warned of lasting consequences for the SNCF if the strike extends into the summer.

"When our freight train clients see that the service isn't reliable... they start using the roads, and it's very difficult to get them to come back," Pepy said.

Prime Minister Edouard Philippe warned Sunday that the government would not be deterred from the main elements of its reforms.

"I get messages from people who support the government, saying we need to carry this through all the way. And that's what we are going to do," Philippe told the Parisien newspaper.