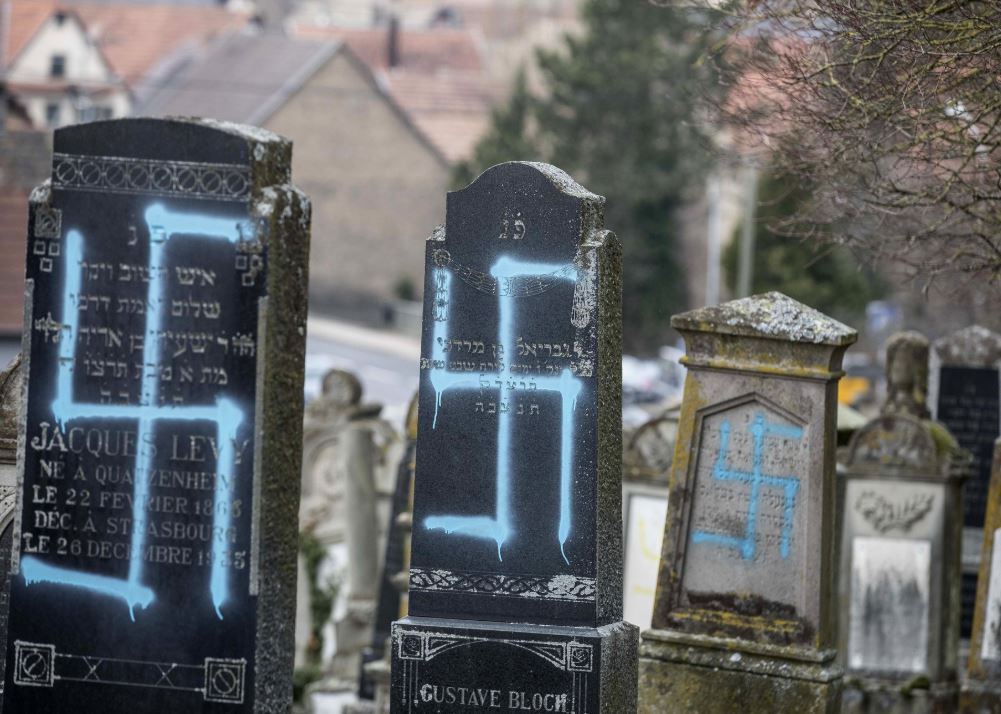 French residents and public officials from across the political spectrum geared up Tuesday for nationwide rallies against anti-Semitism following a series of anti-Semitic acts, including the swastikas painted on about 80 gravestones at a Jewish cemetery overnight.

Just hours ahead of the events in Paris and other cities, French President Emmanuel Macron headed to the cemetery in Quatzenheim, a small Alsace town, and said he felt shame at the sight of the defaced markers.

Macron observed several moments of silence in front of the vandalized graves while local Jewish community representatives stood by.

“We will take action,” he promised.

The upsurge in anti-Semitism in France, home to the world’s largest Jewish population outside Israel and the United States, surged last weekend when a torrent of hate speech was directed at prominent philosopher Alain Finkielkraut during a march of yellow vest anti-government protesters.

The assault came days after the French government reported a big rise in anti-Semitism last year: 541 registered incidents, up 74 percent from 311 in 2017.

In addition to the marches, Macron will join National Assembly President Richard Ferrand and the head of Senate, Gerard Larcher, to hold a moment of silence at the Shoah memorial in Paris.

“Every time a French person, because he or she is Jewish, is insulted, threatened — or worse, injured or killed — the whole Republic” is attacked, Macron said at a press conference in Paris after meeting with Georgia’s President Salome Zurabishvili.

Macron is not expected to attend the gathering at the Republic Square, but will deliver a speech at Wednesday’s annual dinner by leading Jewish group CRIF.

“Anti-Semitism is deeply rooted in French society. We would like to think otherwise, but it is a fact,” Philippe told L’Express magazine. “We must be totally determined, I would say almost enraged, in our will to fight, with a clear awareness that this fight is an old one and will last a long time.”

In other recent incidents, swastika graffiti was found on street portraits of Simone Veil — a survivor of Nazi death camps and a European Parliament president who died in 2017. The word “Juden” was painted on the window of a bagel restaurant in Paris, and two trees planted at a memorial honoring a young Jewish man tortured to death in 2006 were vandalized, one cut down.

Two youths were arrested Friday after they allegedly fired shots at a synagogue with an air rifle in the Paris suburb of Sarcelles, where a large Jewish community lives. Sarcelles mayor Patrick Haddad told BFMTV on Tuesday that prosecutors believe the motive was anti-Semitism.

Political parties from across the spectrum will unite in Paris but Marine Le Pen’s far-right party will hold a separate event.

According to sociologist Danny Trom, author of the book “France Without Jews,” thousands of Jewish people leave France every year because the rise of anti-Semitism.

“This is a low-intensity war, perhaps, but let’s not forget the murder of children killed at close range by Mohamed Merah in a school,” Trom told French magazine Telerama, referring to the murder in 2012 of three children and a teacher from a Jewish school by an Islamic extremist in the southwestern city of Toulouse.

“It is without equivalent in the history of France,” he said. “Jews have been present in France since the dawn of time. Now, the pressure is such that they are led to consider their country inhospitable.”