WORLD French schools reopen in mourning after beheading of teacher

French schools reopen in mourning after beheading of teacher

French schools held a nationwide minute of silence Monday in honor of a teacher who was beheaded for opening a class debate on free speech by showing students caricatures of the prophet of Islam. 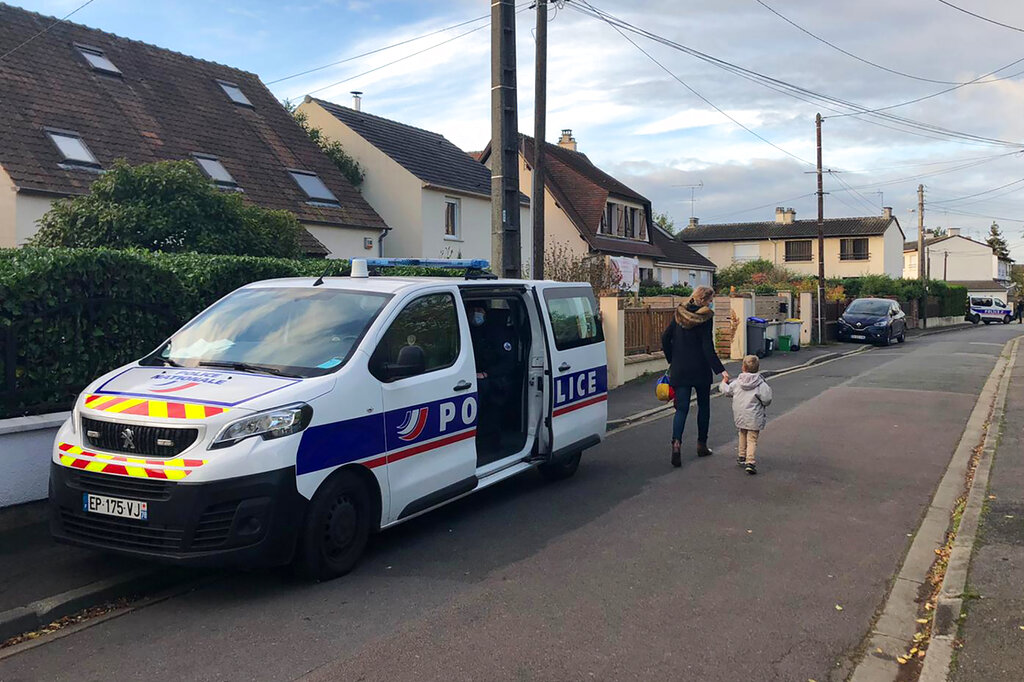 A woman holds her child by the hand on their way to the school in Conflans-Sainte-Honorine, northwest of Paris, Monday Nov.2, 2020. (Photo: AP)

Invoking France's cherished rights of expression and secularism, officials recalled the country's Enlightenment past as they urged students and teachers alike to look to the future.

Samuel Paty was killed on Oct. 16 outside his school in suburban Paris by an 18-year-old refugee of Chechen origin to punish him for showing the caricatures published by the satirical newspaper Charlie Hebdo, which triggered a newsroom massacre by extremists in January 2015.

Since their re-publication in September at the start of the ongoing Paris trial over the killings, France has endured three attacks blamed on Muslim extremists: one by a Pakistani refugee that injured two people outside the newspaper’s old headquarters, the slaying of the schoolteacher, and a deadly knife attack last Thursday in a church in the Mediterranean city of Nice. France's anti-terrorism prosecutor has opened investigations into all three, and France is now at its highest level of alert.

“Samuel Paty taught each child of the Republic to become a free citizen. For him, for our country, we will continue. It is our honor and our duty,” French Prime Minister Jean Castex wrote in a tweet.

French President Emmanuel Macron has promised to increase protection of schools and churches immediately after the Nice attack, more than doubling the number of soldiers actively deployed in the country. Paty was killed at the beginning of a two-week French school holiday that saw the country declare two states of emergency: one for security and the other for health.

“We are living through difficult days, and I want you to recall these few words. You are France! To be French, at school in the Republic, is to learn to be free, to blossom, to rise up by knowledge,” he wrote.

On Monday, the middle school where he taught at Conflans-Saint-Honorine reopened for teachers only. Castex spoke with elementary school students in the town, discussing citizenship and rights before leading them in the national anthem. Other schools throughout the country resumed as usual to both students and teachers.

At schools throughout the country, students listened to readings of the letter of Jean Jaurès, a 19th century French thinker and politician, to instructors urging them to teach the country's children to “know France, its geography and its history, its body and its soul.”

The cartoons were originally published in Denmark in 2005 and elsewhere later in countries where freedom of expression is considered inviolable. Many Muslims see them as sacrilegious and protests against France have spread in many countries.

In Germany and the Netherlands, many schools were also paying tribute to Paty.

“We can send a sign of solidarity with those teachers who are committed to democratic coexistence,” state Education Minister Sandra Sheeres wrote in a message to Berlin schools asking them to participate.

Scheeres also asked those participating to explain the background to their students to make them aware of “tolerance and solidarity as well as against violence and extremism.”

The Dutch education ministers asked schools, colleges and universities to find ways to express their support.

“The Netherlands stands squarely behind teachers and the constitutional freedom of expression,” ministers Arie Slob and Ingrid van Engelshoven wrote. “Teachers must be able to do their work in freedom and security so our children and youth can develop into independent citizens who can live together in a country that is characterized by freedom, equality and solidarity.”