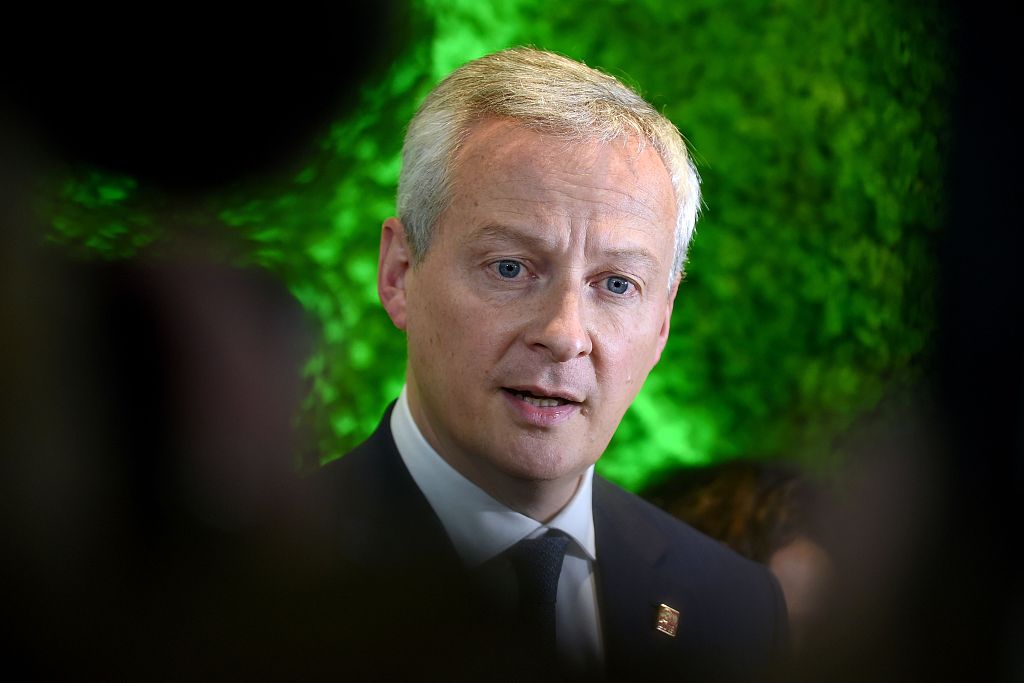 French Finance and Economy Minister Bruno Le Maire answers journalists' questions during a press conference at the OECD headquarters in Paris on May 22, 2019. (File photo: VCG)

PARIS, July 11 (Xinhua) -- The French Senate, the opposition-controlled upper house of Parliament, passed a law on Thursday introducing the so-called GAFA tax, making France one of the first countries to impose a tax on digital giants.

GAFA is an acronym for Google, Apple, Facebook and Amazon.

The new law paves the way for the eurozone's second largest economy to unilaterally levy a 3-percent tax on much of the internet giants' digital sales in France related to advertising, websites and the resale of private data.

The tax was adopted by the National Assembly, the lower house of Parliament, on July 4.

Introduced in France retroactively from Jan. 1, 2019, this tax on gross digital sales would help the country collect 400 million euros this year and 650 million euros by 2022.

"With the taxation of digital services, we are building the tax system of the 21st century, which should be fair and efficacious," French Finance Minister Bruno Le Maire told senators before the vote.

"We want to impose on these new business models the same rules that apply to all other economic activities," he said.

France has pushed efforts within the European Union (EU) and on the international stage to change rules that currently enable tech companies, such as Facebook and Google, to reduce their tax bills by booking revenue in low-tax countries like Ireland or Denmark.

Furthermore, the 28-member bloc is also divided on how to resolve the disputed issue on where the digital firms' cross-border income should be taxed.

Following the failure in Brussels to agree on an EU-wide tax on the world's top digital companies by the end of 2018, the French government decided to impose the tax at national level.

On Wednesday, U.S. President Donald Trump ordered a so-called Section 301 investigation into the tax -- a move that could lead the U.S. administration to impose new tariffs on French imports if Washington and Paris cannot reach a negotiated settlement.

"The United States is very concerned that the digital services tax, which the French Senate is expected to pass tomorrow, unfairly targets American companies," the Office of the U.S. Trade Representative (USTR) said in a statement.

"The president has directed that we investigate the effects of this legislation and determine whether it is discriminatory or unreasonable and burdens or restricts United States commerce," it said.

Section 301, under an outdated U.S. trade law adopted in 1974, allows the U.S. president to unilaterally impose tariffs or other trade restrictions on foreign countries.

"France is a sovereign country, its decisions on tax matters are sovereign and will continue to be sovereign," Le Maire said.

"Between allies, I believe we can and must resolve our differences in a way other than through threats," he said.

"We will have the G7 finance ministers in the next 10 days in Chantilly (in northern France), the U.S. secretary of the treasury will be there. Let's speed up the work at the international level, find a common solution, find an alternative at the OECD (Organization for Economic Co-operation and Development) level and go through agreements rather than menaces," he stressed.

CAN THE TAX WORK?

French President Emmanuel Macron's government had pushed ahead on its own to impose the digital tax to "build the taxation of the 21st century", although questions have already arisen on whether it will really work.

According to the French Senate's Finance Committee, the digital tax "is not perfect economically, since it taxes the turnover and not the profits and it is too complicated to be implemented".

"This new tax must be seen as a palliative, pending a multilateral decision," the Finance Committee said.

According to economist Nicolas Doze, the government's new tax is "a good political message but a bad fiscal tool".

"Taxing the turnover before the companies realize a single euro in profit is an economic nonsense. Furthermore, it is the consumers who will shoulder the consequences as (the affected companies) will pass this tax on in their prices," Doze told the news channel BFMTV in a recent interview.

"It is also a headache for the finance ministry. How it will collect this tax and define a fiscal basis with the companies' turnover data is very hard to tell," he added.

Others experts suggested that France's move was a promising debut to broader tax rules for the digital era.

"There are experts who say that France should not tax revenue and others say that this tax will be practically impossible to enforce. All this is true, but ... what is new and significant is that the world's powers, such as the U.S., China and India, agreed to impose the GAFA tax," said Alain Duhamel, a political analyst.

Speaking on RTL radio, Duhamel noted that the OECD's draft deal to propose a tax at international level "has chances to be adopted" in a way that could transform the French proposal from "an isolated initiative into a true change of power balance."

An accord on overhauling cross-border tax rules for the digital era in the OECD countries is expected by the end of 2020. (1 euro = 1.12 U.S. dollars)