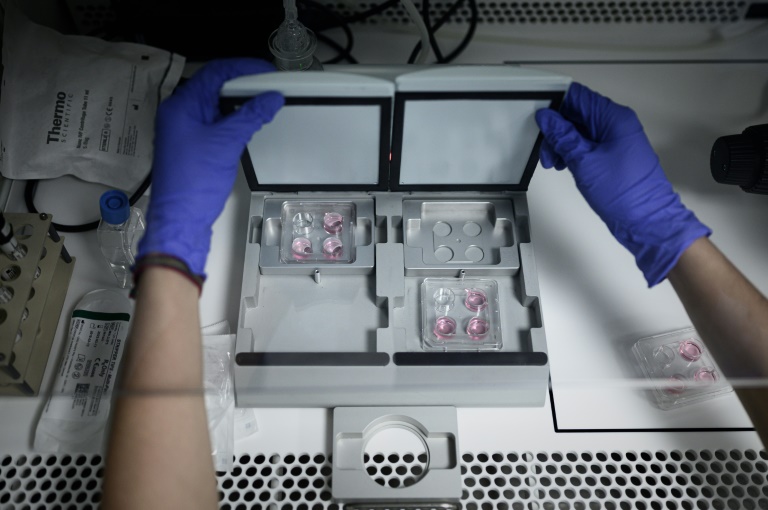 A recent poll found that 68 percent of French people approved IVF and other medically assisted procreation for single women, and 65 percent for lesbian couples. (Photo: AFP)

Thousands of people prepared to descend on Paris on Sunday to protest a government plan to let single women and lesbians become pregnant with fertility treatments, the first major social reform since France legalised gay marriage in 2013.

Organisers say they are hoping 100,000 will turn out against a law heading to the Senate this month, after it was approved by the lower house of parliament in September.

President Emmanuel Macron pledged during his 2017 election campaign to push the law despite deep resistence among right-wing opponents as well as conservative Roman Catholics and other religious groups.

They had mobilised massively in 2012 and 2013 against a move by Macron's Socialist predecessor Francois Hollande to legalise marriage for homosexual couples, with one Paris protest attracting 340,000 people according to police.

But that law did not allow lesbian couples or single women to have children via in-vitro fertilisation or other medically assisted means, long a taboo in France.

Many women have instead been forced to go abroad for such treatments, and French courts had refused to recognise the second mother's maternity rights in the case of same-sex couples.

Under the proposed law, France's healthcare system would cover the cost of the procedure for all women under 43.

It also would allow children conceived with donated sperm to find out the donor's identity when they turn 18, a change from the country's strict donor anonymity protections.

If approved, the law would bring French legislation in line with other European nations including Britain, Spain, Portugal, the Netherlands, Ireland, Belgium and Scandinavian countries, which authorise medically-assisted procreation for all women.

Opponents say the law deprives children of a necessary paternal figure and threatens a traditional family structure, and would open the door to legalising surrogacy, including for gay men.

Protest organisers have chartered two high-speed TGV trains and around 100 buses to bring people to Paris on Sunday, where they plan to rally outside the Senate at 1:00 pm (1100 GMT) before marching to the monolithic Tour Montparnasse skyscraper.

"It's not going to be derisory. It will probably be comparable to the first protest (against gay marriage) in 2012, with around 100,000 people," said Pascale Moriniere, president of the Association of Catholic Families (AFC).

Her group and others say they have distributed some three million flyers against the law in recent weeks.

But analysts say French society has become more acceptive of non-traditional families since 2012, noting for example a vote by National Assembly lawmakers last week to officially recognise the parenthood of a couple who had twins in the US via a surrogate.

An Ifop poll in September found that 68 percent approved IVF and other medically assisted procreation (MAP) for single women, and 65 percent for lesbian couples.

"It's hard to predict what will happen Sunday but public opinion is much less divided on MAP than on gay marriage," Frederic Dabi, an Ifop director, told AFP.

Gerard Larcher, the right-wing president of the Senate who protested against the gay marriage law six years ago, is not expected to attend the rally Sunday.

"The people demonstrating will be doing it more out of moral conviction, a sense of duty, rather than to try to make the government back down," said Yann Raison de Cleuziou, a sociologist who has studied the conservative Catholic movement against the family reforms.