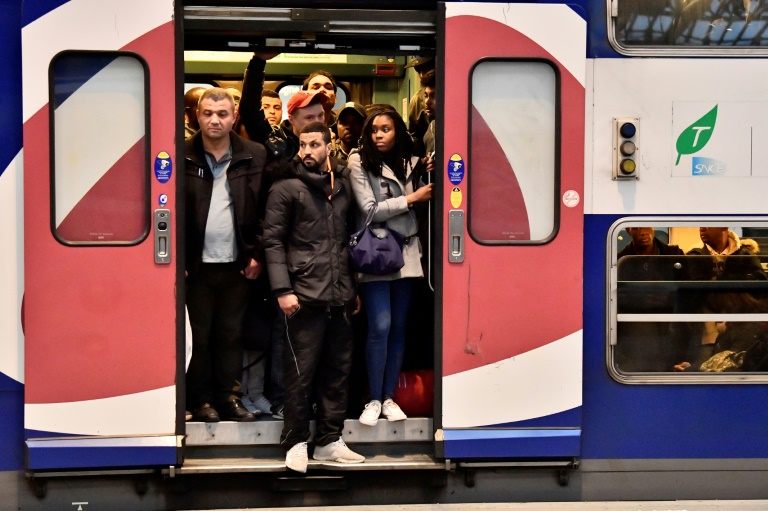 The strike will cause chaos for France's 4.5 million train passengers. (Photo: AFP)

More than three-quarters of train drivers joined the first day of the walkout, according to the SNCF, the heavily indebted state rail operator which Macron wants to overhaul.

Only one in eight high-speed TGV trains and a fifth of regional trains were running on what French media have dubbed "black Tuesday".

And with stoppages planned two days out of five until June 28, weeks of disruption lie ahead for France's 4.5 million daily train passengers.

"We have been asking for the same thing for several weeks -- that the government completely reconsider its plan. They need to start again from scratch," Philippe Martinez, head of the CGT trade union, told France Inter radio.

The strike was accompanied by demonstrations by several hundreds of rail workers in Paris and other cities and represents the biggest wave of industrial unrest since Macron came to power last May.

The railways are a bastion of trade unionism in France and have forced governments into U-turns in the past during major stoppages.

"Unions are still able to gather support when they go on strike in France, although maybe less so than in the past," he added.

Prime Minister Edouard Philippe said Tuesday that the government would push ahead with its planned overhaul for the SNCF, which he said required 14 billion euros ($17.2 billion) of public money each year.

"I must say that I hear the strikers, who speak fervently at times, as much as I hear those who do not accept this strike," Philippe told lawmakers in parliament.

A second day of strikes on Wednesday is set to cause a similar level of disruption as the first day, the SNCF warned.

Public support for the rail strike stands at just below half, according to an Ifop poll released Sunday, and commuters expressed a mixture of sympathy and frustration with the reduced service.

"I start work at 1:00 pm. Do you know what time I had to get up? 5:00 am," complained Jean Nahavua, a manager at a wholesale company who lives in Lille and commutes to Paris.

Pascal Lasnier, a banker waiting at the same station, added: "I understand that they want to defend their piece of the pie, but maybe there are other ways of doing it."

As commuters took to the roads instead, the streets of Paris were snarled with an "exceptional" 370 kilometres (230 miles) of traffic jams during the morning rush hour before easing, according to traffic website Sytadin.

At the capital's busy Gare du Lyon station, the platforms were so crammed that a woman fell onto the tracks and had to be helped out by fellow passengers.

But major regional stations including Nice, Lille and Marseille were virtually deserted as travellers anticipated cancellations.

Three-quarters of Eurostar trains to London and Brussels were running on Tuesday and Thalys trains towards Belgium and the Netherlands were operating almost normally, but there were none at all to Spain, Italy or Switzerland.

At Air France, where staff are striking for the fourth time in a month to demand a pay rise, managers said 75 percent of flights would operate. Further walkouts are planned at the airline for April 7, 10 and 11.

Thanks to the internet and mobile phone apps, many French commuters were able to work from home or arrange car-pools -- though extra seats were in high demand.

On the Blablacar car-pooling site Tuesday morning, 80 of the 95 listed trips from the northern city of Lille were booked solid.

"I kept updating the site to find a ride and as soon as this one came up I clicked immediately," said Pierre, a 24-year-old in Lille on his way to Paris.

Macron says the SNCF, saddled with 46.6 billion euros of debt, needs to drastically improve its efficiency and cut running costs as EU countries prepare to open passenger rail to competition by 2020.

His government is planning to stop granting the rail workers' special status -- which guarantees jobs for life and early retirement -- to new SNCF hires.

It also wants to combine the three bodies that make up the SNCF into a single state-owned company, prompting fears among unions that it could be a step towards privatising the rail operator.