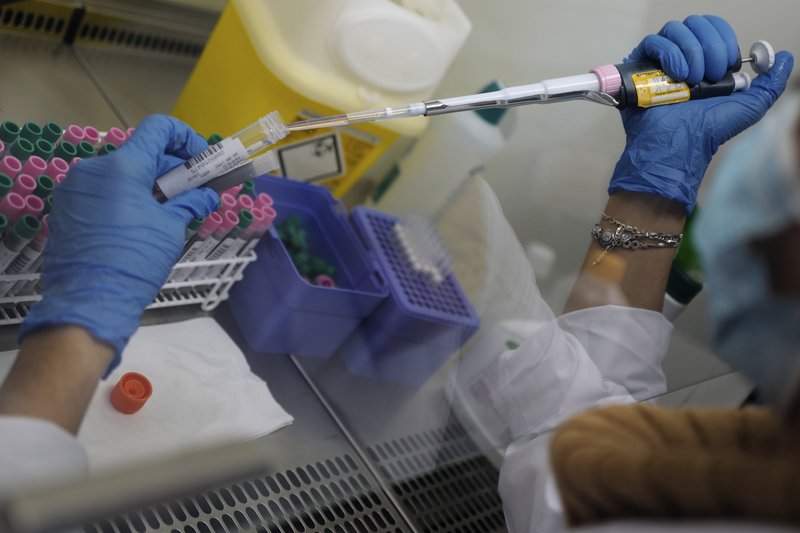 France’s COVID-19 resurgence is palpable in the buzzing biology lab of this public hospital in the Paris suburb of Argenteuil.

Tube after tube arrive with new nasal swabs, now about 240 per day. And the lab director struggles to obtain enough reagents to keep up with escalating demand.

More than 1 million of France’s 67 million people took a virus test over the past week, putting labs like this under growing strain. Getting a virus test in Paris this month has involved long waits, both to be tested and to receive the result, complicating authorities’ efforts to trace the epidemic in real time.

“The staff is tired and in particular the technicians who work in this department. Honestly, they’re exhausted,” Courdavault told The Associated Press as she glided through the corridors of the sprawling 1990s-era complex 10 kilometers (six miles) northwest of Paris.

In a careful ballet accompanied by the quiet hum of machines, masked lab technicians disinfect, sort and label the samples with bar-code stickers, and robotic arms guide them through automated molecular platforms beneath tinted-glass hoods, used to reach into the samples’ genetic material.

While France suffered testing shortages early in the pandemic, ramped-up testing since this summer has helped authorities track a rising tide of infections across the country. More than 15,000 new cases were reported Friday, and the Paris hospital system is starting to delay some non-virus surgeries to free up space for COVID-19 patients.

The government is shutting all restaurants and bars in the Marseille region this weekend, curtailing access to the French Open and imposing other restrictions it hopes slow the spread and avert new, economically damaging lockdowns.

More than 16% of tests in the Argenteuil lab are now turning out positive, well above the national average of 6.2% positive cases. That’s in part because the hospital limits its testing to people with an appointment and a prescription.

“We defined time slots for taking samples and I told the testing center to limit the number of samples they took so as to avoid never-ending lines and to make sure we could handle these samples ourselves,” she said.

Courdavault’s 240 daily tests are just a few of the 37,000 samples processed daily across the Paris region. But it wouldn’t take many more to push her lab into overdrive.

“For some machines, … we’re out of reagents on the Saturday or the Sunday,” leaving the professor to stress over supplies until the following Monday – or later. “This strain on the supply chain for reagents is preoccupying and it means more work to keep track.”

More work for this lab could mean less time devoted to analyzing samples for patients with other serious illnesses. It’s also taking a toll on Courdavault, who acknowledged she could do with a break after months of carrying out the same tests and answering the same questions.

The European Medical Biologists Union has warned against “panic tests” by people who fill up labs without a clear medical reason, or get tests in multiple labs to see which one produces a result first.

France’s government has approved simpler, 30-minute tests like those used in some other countries, but they aren’t widely available yet, and anyone testing positive would then need to take a standard PCR test to confirm the result.

In the meantime, Courdavault has told her staff to brace themselves: “we are in the midst of a second wave,” which she expects won’t peak until Oct. 15.