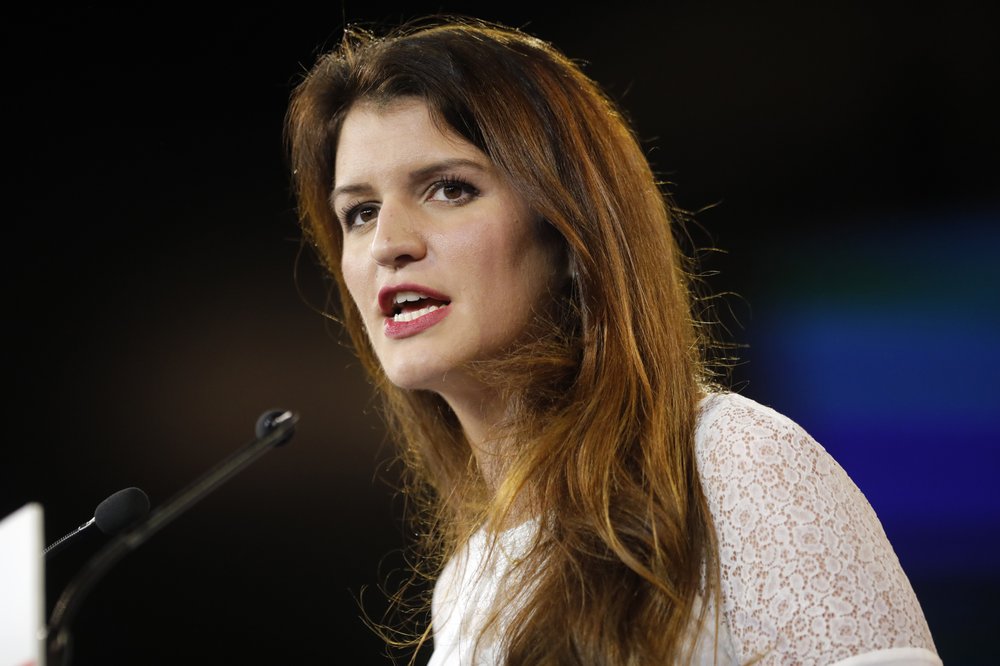 In this Nov. 18, 2017 file photo, French secretary of state for women's rights Marlene Schiappa delivers a speech in Chassieu, near Lyon, central France. Twelve women, journalists and witnesses go on trial Monday Feb. 4, 2019, for alleged defamation of prominent French lawmaker Denis Baupin after their accusations of sexual misconduct forced his resignation, although Baupin denied any misconduct, and Marlene Schiappa has said she would not specifically comment on the case because it's up to justice to decide. (Photo: AP)

A former French lawmaker’s defamation lawsuit against six women who accused him of sexual misconduct and four journalists who reported the allegations goes to trial Monday in what some fear illustrates a backlash against the #MeToo movement.

Baupin, a prominent Green Party member and former Paris city official, resigned as vice president of the lower house of parliament when the reports came out in May 2016. He denied wrongdoing and the next month, sued the journalists, the six accusers who agreed to be named in the news reports and two men who were quoted corroborating some of the alleged misbehavior.

Baupin’s lawyer, Emmanuel Pierrat, said his client did nothing illegal and now wants to “fully clear his name.” The lawsuit’s main intent is to prove the investigative website and radio station were unfair in their coverage, Pierrat said.

“His reputation, his family, his life were broken” by the allegations, Pierrat told The Associated Press.

Most of the women who spoke about Baupin’s alleged behavior from 1998 to 2013 were fellow Green Party members, and outrage greeted their descriptions. Four filed criminal complaints for sexual harassment. A nine-month judicial investigation ended without charges.

Prosecutors said the three-year statute of limitations had expired, but released a statement saying the women’s “measured, constant statements” and witness corroboration created a set of facts to support allegations of actions that “may for some of them be classified as criminal.”

As a defense for defamation under French law, journalists and individuals need to show they acted in good faith or prove they told the truth. A conviction is punishable by a maximum fine of 45,000 euros ($51,500).

Media reports are evaluated by additional criteria: the legitimacy of journalists’ goals in producing a story, whether they demonstrate an absence of personal animosity, prudence and balance, and the quality of the investigation.

“None of them is fulfilled” in the Mediapart and France Inter pieces on Baupin, Pierrat said.

In interviews with The Associated Press, three defendants in the defamation trial said they also plan to speak in a Paris courtroom for other women who requested anonymity or did not air their experiences.

“The question is: Will justice send the message that women must remain silent?” Sandrine Rousseau, a former Green Party spokeswoman who accused Baupin of grabbing her breast at a 2011 meeting, said. “It’s an important message, a message saying that women can speak out —or not.”

Another Green who serves on the Paris regional council, Annie Lahmer, said she considers it her “duty” to speak out.

Lahmer alleges Baupin chased her around an office desk while she tried to elude his grasp in 1999, when she was a Green Party employee and he was national party spokesman. When she made clear she wouldn’t tolerate such behavior, Lahmer alleges Baupin told her she would not be able to have a career in the party.

“In court, I’m going to say it’s inadmissible that some men who hold power consider that kind of behavior as normal. It’s not,” she said.

Isabelle Attard, like Baupin a former lawmaker, alleged he sexually harassed her with dozens of inappropriate text messages in 2012 and 2013. Attard said it hasn’t been easy for her to break years of silence and hopes growing awareness and support from the #MeToo movement gives other women “more courage to say no and speak out.”

“I was just an activist who then became a lawmaker facing someone very prominent in the party,” Attard said of her feelings when the alleged misconduct happened. “I didn’t feel on an equal footing with him.”

The Associated Press does not usually identify alleged victims of sexual violence unless they agree to be named or come forward voluntarily and identify themselves, as Rousseau, Lahmer and Attard did.

Marlene Schiappa, France’s secretary of state for women’s rights, acknowledged “a very little bit of progress” has been made in France since 2016 through new laws aimed at better protecting victims of sexual violence and promoting gender equality.

French lawmakers, for example, passed a bill that extended the three-year statute of limitations on sexual harassment claims to six years.

Schiappa said she would not specifically comment on the Baupin case since it is going to court, but thinks in France there’s been “an enormous backlash” to the #MeToo movement, which challenges “a sexism very deeply anchored in our society.”

“What I deplore is that in a general way, whenever a woman talks about sexual or sexist assault, you start to dig into the woman’s life and put this woman into a position of being accused,” she said.