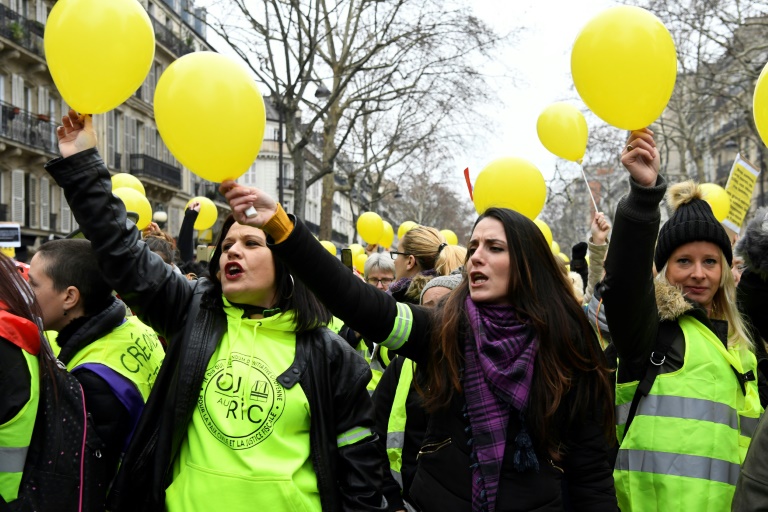 Hundreds of women on Sunday marched in Paris to reclaim France's "yellow vest" movement from violent activists, a day after protesters smashed their way into a government ministry.

The women, wearing yellow vests, turned out after 50,000 people returned to the streets of France on Saturday amid violent clashes with police.

ome of the women waved yellow balloons and pushed prams. Protests were also held in other French cities.

"All the media ever reports is the violence, and we are forgetting the root of the problem" which is the fight against austerity, said one protester, Karen, a 42-year-old nurse from Marseille.

The women sang the "Marseillaise", France's national anthem, as they gathered on the steps of the city's opera house at Bastille before marching through nearby streets.

The women's demonstrations came as Economy Minister Bruno Le Maire called for an end to the "yellow vest" unrest, saying "those who believe in democracy" should now say "that's enough", he told Europe 1 radio.

There were also women's demonstrations in Caen, northwestern France, and Montceau-les-Mines, central-eastern France. In the southwestern city of Toulouse, 300 women took to the streets shouting: "Macron your goose is cooked, the chicks are in the street."

The "yellow vest" protest movement, which has now seen protests on eight consecutive Saturdays, was initially triggered by anger over an increase in fuel taxes.

But it has since morphed into a campaign against the high cost of living and the government of President Emmanuel Macron, seen by many as arrogant and beholden to big business.

Government spokesman Benjamin Griveaux, who is also a minister, on Saturday had to flee his offices by a backdoor when a handful of protesters smashed down the large wooden door into his ministry compound with the help of a forklift truck.

He later denounced the break-in, in which some cars were damaged and windows smashed, as an "unacceptable attack on the Republic".

Griveaux had earlier criticised the yellow vest movement, describing those involved as "agitators" who sought "to overthrow the government".

The yellow vest protests have turned into the biggest political crisis of Macron's 20-month presidency and brought his popularity ratings to an all-time low.

He initially refused to make any concessions, but in mid-December, after weeks of violence, he scrapped the planned fuel tax hike and promised extra cash for minimum wage earners as well as tax cuts for pensioners.

Although public anger appeared to abate over the holiday period, the brief arrest on Wednesday of Eric Drouet, one of the leaders of the movement, seems to have rekindled resentment among his supporters.

The latest opinion poll, published on Thursday by Odoxa Dentsu, indicated 55 percent support the protests -- a figure which, although lower than the 75 percent back in November, is still important enough to suggest the anti-austerity movement retains political clout.

Meanwhile, former cinema icon Brigitte Bardot, who is known today for her rightwing views and animal rights activism, on Sunday said she understood what motivated the yellow vest movement.

"When I see the millions spent on incredibly trivial things, when I see politicians using private planes and chauffeur-driven cars to get around (...) all this money spent is unacceptable," she told the Midi Libre newspaper.

"It should be given instead to people in need."