A French yellow vest protester sustained what appeared to be a serious hand injury during violent clashes with police on the streets of Paris on Saturday in a 13th consecutive week of demonstrations. 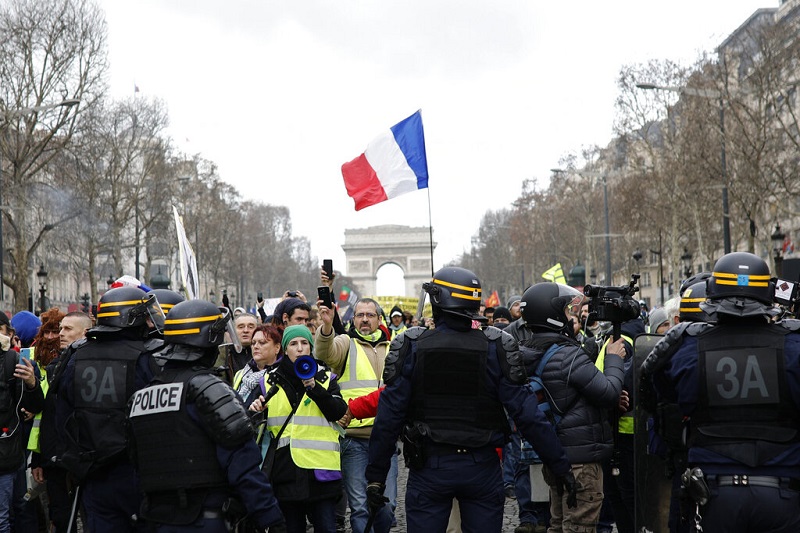 Paramedics huddled around the injured protester near the gates of the National Assembly as they provided emergency treatment. Some of the paramedics served as a barrier to stop media and demonstrators from getting too close. Police confirmed that a protester had a hand injury, but provided no further details other than to say treatment was being provided.
Fire department spokesman Gildas Lecoeur told The Associated Press that the injured man had a bloodied hand and was taken to a hospital. He couldn't confirm the man's current condition.
Police said that about 10 demonstrators have been arrested so far as scuffles broke out between protesters and police near the Champs-Elysees avenue and the National Assembly.
Police used batons and fired tear gas in Paris to disperse demonstrators, some of whom threw debris at riot police hunkered down in front of the National Assembly.
The protest in the French capital has passed the National Assembly and is due to end up near the Eiffel Tower.
The yellow vest activists, who have brought hundreds of thousands onto the streets over the past three months, are now trying to achieve electoral success but the movement is politically divided and has no appointed leader.
President Emmanuel Macron — the target of many demonstrators' anger — seems to be clawing back support as he tries to quell the movement with a national political debate. Recent polls show Macron's approval ratings rising.