French yellow vests were protesting for a 16th straight weekend in Paris and other cities to show they are still mobilized against the government's economic policies they see as favoring the rich. 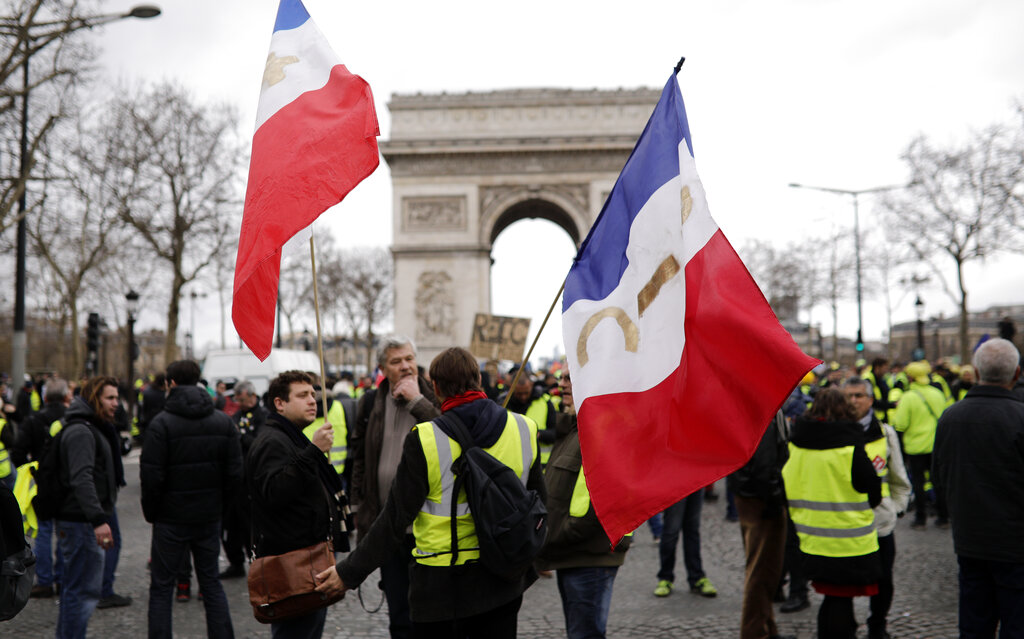 In Paris, protesters gathered Saturday at the Arc de Triomphe monument as a march was planned through the well-off western neighborhoods of the capital.

French President Emmanuel Macron on Friday reiterated a call for calm, pointing at "unacceptable" outbreaks of violence since the movement began in November.

Organizers say they want to maintain pressure on the government as a two-month "grand debate" initiated by Macron to let ordinary French people express their views on the country's economic and democratic issues is ending this month.

Sophie Tissier, a coordinator of the Paris protest, told The Associated Press that "we keep protesting every Saturday because Macron doesn't respond at all to the yellow vests' demands. We want to rebuild our democracy and change today's political system."

Other protests are taking place in France's major cities of Marseille, Lyon, Bordeaux, Lille and others.

The movement was named after the fluorescent vests that French motorists must carry in their vehicles for emergencies.

The protests started in November to oppose fuel tax hikes, but have expanded into a broader public rejection of Macron's economic policies, which protesters say favor big businesses and the wealthy over ordinary workers.

Macron has since announced a package of measures worth about 10 billion euros ($11.4 billion) to boost workers' and retirees' purchasing power and launched a national debate that is taking place through meetings across France and a dedicated website until mid-March.

Many yellow vests reject the debate which they consider as politically driven to serve the government's interests.