Frenchman zips across Channel on 'flyboard' 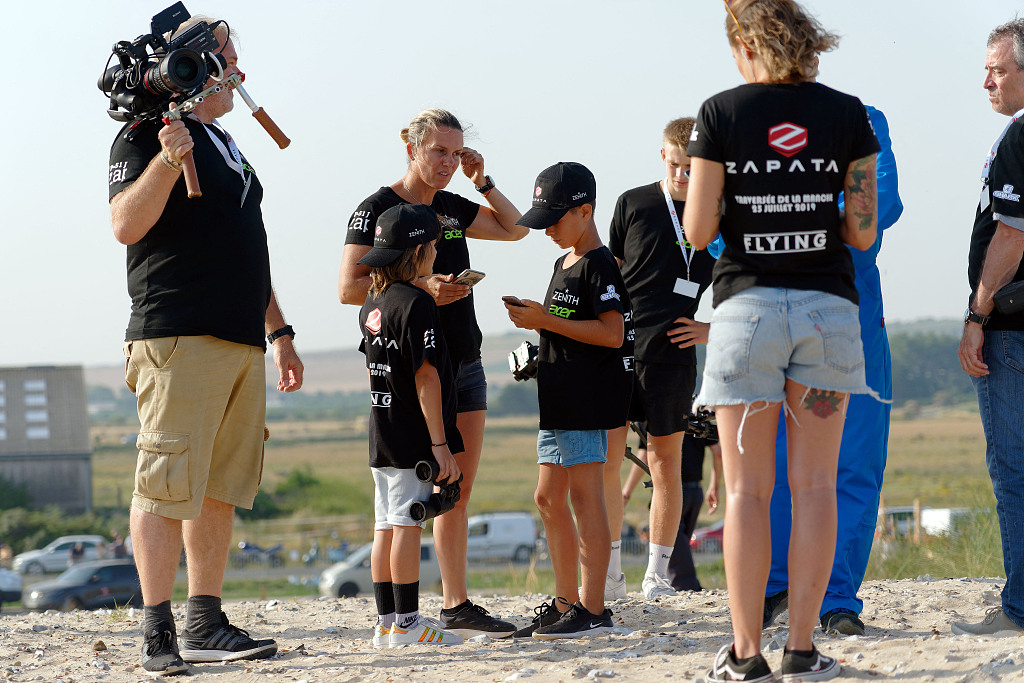 File photo: Flyboard Inventor Franky Zapata Fails In Cross-Channel Bid - Sangatte. Krystel, wife of Franky Zapata and their son waiting for news of Franky Zapata after his test flight on his jet-powered hoverboard or "Flyboard" in Saint-Inglevert, northern France on July 24, 2019./ VCG

A Frenchman who has spent years developing a jet-powered hoverboard zoomed across the English Channel on Sunday after a first attempt last month was cut short when he fell into the water while trying to refuel.

Franky Zapata set off on his "Flyboard" from Sangatte on the northern coast of France for the 20-minute trip to St. Margaret's Bay in Dover, on England's south coast.

Escorted by three helicopters, Zapata glided across the water in the early morning light and landed in the picturesque bay, where dozens of onlookers and journalists awaited him.

The five turbines on the former jet-ski champion's craft propel him at speeds of up to 190 kilometres (118 miles) an hour, powered by a backpack full of kerosene that can keep him airborne for around 10 minutes. 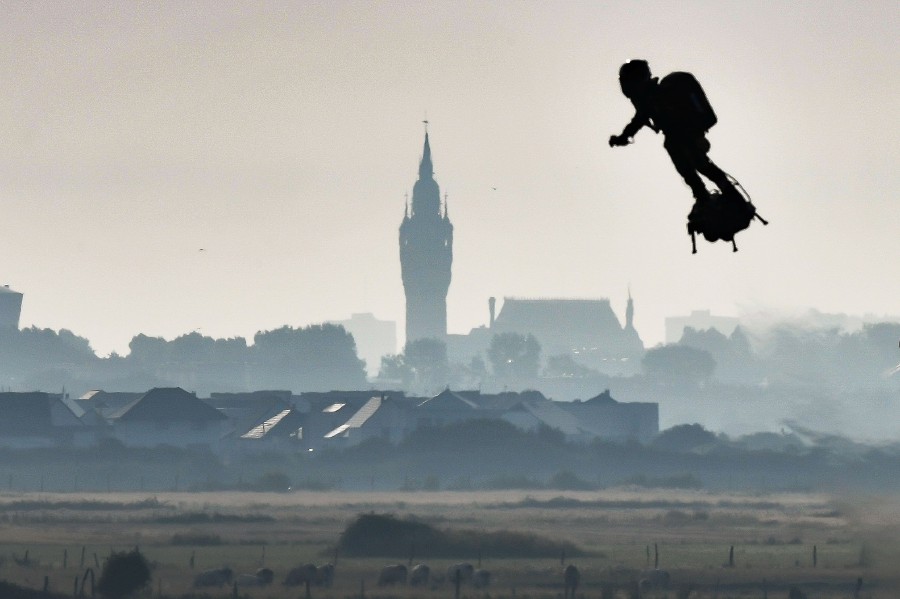 Franky Zapata on his jet-powered "flyboard" flies past the belfry of the city hall of Calais (C) after he took off from Sangatte, northern France, on August 4, 2019, during his attempt to fly across the 35-kilometre Channel crossing in 20 minutes, while keeping an average speed of 140 kilometres an hour (87 mph) at a height of 15-20 metres above the sea. (Photo: AFP)

Zapata tumbled into the middle of the busy shipping lane on July 25 after failing to land on a boat waiting in English waters to give him a fresh pack of kerosene.

"The trickiest part is really the refuelling," the 40-year-old Zapata said last Thursday. "I didn't let up on the gas at the right moment."

"Aviation is the result of people who have had failures, and it's by getting back up that we move forward," he said.

This time the refuelling boat was bigger and had a larger landing area, and French navy vessels in the area kept an eye out in case of trouble.

French maritime authorities gave Zapata's team permission to keep the refuelling boat in French waters, something they had refused the first time around citing safety concerns.

Zapata's team had been racing to repair the hoverboard after it was damaged from falling in the Channel waters 10 days ago.

The main uncertainty this time around, Zapata said Saturday, was that his hoverboard might end up having "a little problem."

"Normally we test the machines for several weeks before big events. Here, it's a little bit worrying to be using a machine that has just been rebuilt," he said.

Zapata has been developing his hoverboard for the past three years, despite losing two fingers during its maiden flight in his garage near Marseille, when they got sucked into the turbines.

He already holds the Guinness World Record for the farthest hoverboard flight, a 2.2-kilometre trip over the Mediterranean Sea in April 2016.

No Guinness adjudicator was on hand for the latest Channel attempt, though a spokeswoman said he could still be awarded a new record if the trip meets its guidelines.

Zapata burst into the spotlight at this year's July 14 Bastille Day military parade in Paris, where he and his craft soared noisily above a crowd of stunned onlookers that included French President Emmanuel Macron.

His device has also captured the attention of the French military, which in December gave Zapata's company, Z-AIR, a 1.3 million euro ($1.4 million) development grant.

Defence Minister Florence Parly told France Inter radio that it might eventually serve a variety of purposes, "for example as a flying logistical platform or, indeed, as an assault platform."

"I can't help it, the first time I saw it fly I said, 'This is going to be my life's work'," Zapata told the French online media site Brut in a recent interview.