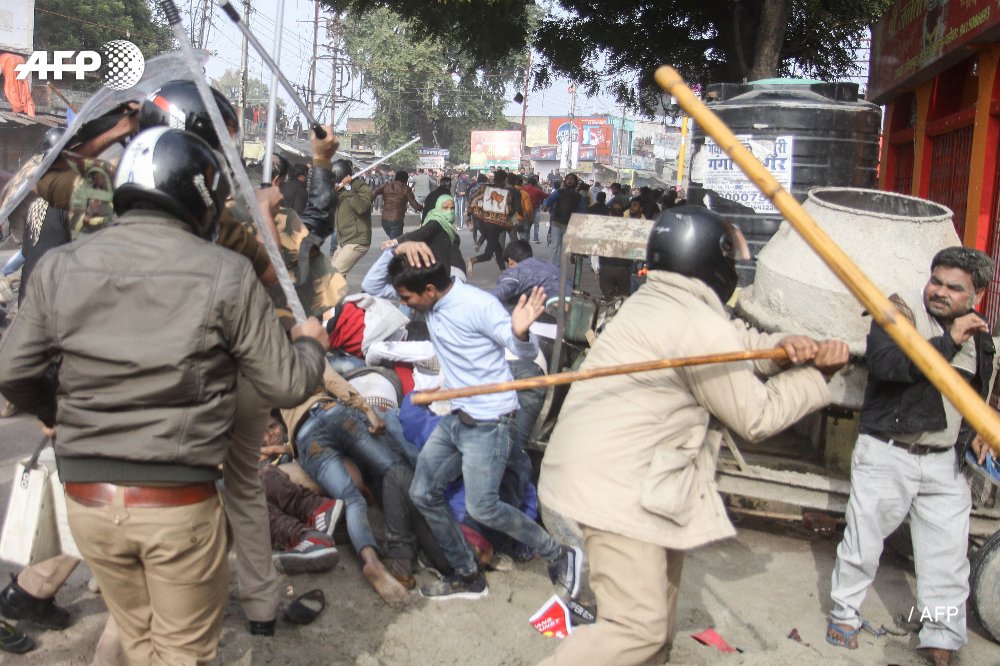 Five more protesters died in fresh clashes Friday between Indian police and demonstrators, taking the death toll to 14 from more than a week of unrest triggered by a citizenship law seen as anti-Muslim, as thousands rallied at the nation's biggest mosque.

The law -- making it easier for persecuted minorities from three neighbouring countries to gain citizenship, but not if they are Muslim -- has stoked fears Prime Minister Narendra Modi wants to remould India as a Hindu nation, which he denies.

The latest deaths, in northern Uttar Pradesh state, followed the loss of three lives on Thursday when police opened fire on protesters in northern Lucknow and southern Mangalore cities.

Rajkumar, who goes by one name, added that five police officers, including three with bullet wounds, were being treated in hospital.

In the city of Firozabad, also in Uttar Pradesh, a police spokesman confirmed "one person has died and at least one other is injured... during the protests", but added the cause of death was not yet known.

Street battles also broke out in the heart of India's capital late Friday with police firing a water cannon and baton charging protesters, who chanted anti-Modi slogans and threw stones.

A car was set on fire and an AFP protester on the scene saw demonstrators bleeding from their heads and mouths during the clashes at Delhi Gate in the Old Delhi district.

The confrontation came as thousands regathered at Delhi Gate following an earlier sit-in in the same area after marching from India's biggest mosque Jama Masjid in the afternoon.

"All the people here, be it those who are Hindu, Muslim, Sikh or Christian -- they are all out on the streets," Tanvi Gudiya told AFP at another Delhi rally  in a Muslim neighbourhood after Friday prayers.

"So doesn't it affect Modi at all? Does Modi not like anyone? Why is he becoming like Hitler?

More than a dozen metro stations in Delhi were closed for the second-straight day.

Violence also spread to other parts of Uttar Pradesh, where almost 20 percent of the 200-million population are Muslim, with demonstrators throwing stones and police firing tear gas.

In Modi's home state of Gujarat, there were new clashes between security forces and protesters in Vadodara city, a day after battles in the largest city Ahmedabad left 20 policemen and 10 locals injured.

Tens of thousands had hit the streets nationwide Thursday, with violence erupting in several places including Mangalore in the south.

Mangalore security forces opened fire on a crowd of around 200 people after they ignored orders to disperse, killing two people, the spokesman for the deputy commissioner Qadir Shah told AFP.

Four others were in hospital with gunshot wounds, while 28 policemen were injured, medical and police officials told AFP.

A protester succumbed to gunshot injuries in Lucknow, said a doctor who declined to be named. Officers denied opening fire in the city.

In Ahmedabad, video footage shared on social media and confirmed by police showed officers in riot gear being pelted with stones by protesters on Thursday.

Authorities have scrambled to contain the situation, imposing emergency laws, blocking internet access, and shutting down shops in sensitive areas across the country.

Mobile phone services were briefly suspended Thursday in pockets of the capital, and access in parts of northeast India -- where the wave of protests began -- was only restored Friday.

In a strongly worded editorial, the Indian Express Friday said the government must do all it can "to keep the peace" in the country, home to 200 million Muslims.

"But in doing so the world's largest democracy cannot look like it cannot accommodate its young who disagree, it cannot afford to signal that it is so ill at ease with itself.

"India risks a lot if it begins to be seen as a place where the dissenter's mind is not without fear."