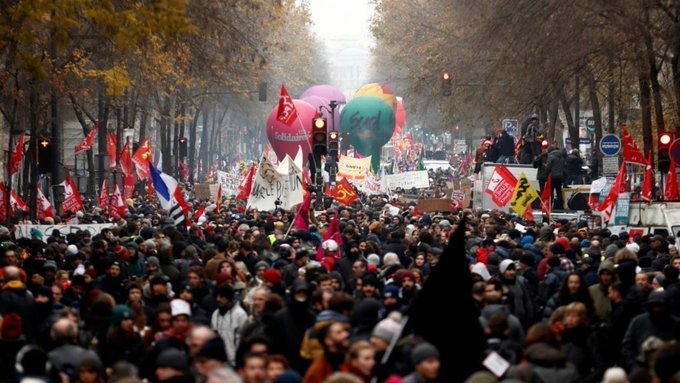 French workers take to the streets anew Tuesday on the 13th day of a transport strike that has exasperated commuters, hit business turnover, and threatened the holiday plans of thousands a week before Christmas.

With just days left to avert transport chaos for many who have already bought their tickets for the festive break, Prime Minister Edouard Philippe on Monday invited unions and employers' organisations to "working meetings" Wednesday.

These sessions on the government's plan to merge 42 existing pension schemes into one would be followed by a joint meeting on Thursday, he said.

Philippe also offered to discuss the reform with bosses of rail operator SNCF and the RATP public transport agency, whose workers are striking over a proposal to take away their special early retirement dispensation.

Train, metro, bus and tram transport will again hobble commuters in Paris and other big cities on Tuesday.

Regional and international trains and domestic flights will also be affected as workers hold a third day of countrywide pickets against the plan for a new, points-based pension system.

The plan controversially includes a proposed "pivot age" of 64 at which people would qualify for a full pension, even if the legal retirement age remains 62.

French officials have said they are willing to negotiate these and other points of contention, which already brought some 800,000 angry workers onto the streets on December 5 and about half that the following week -- the biggest show of strength in years by France's militant unions.

Strike organisers are hoping for a repeat of 1995, when they forced a centre-right government to back down on pension reform after three weeks of metro and rail strikes just before Christmas.

On Monday, the conflict was complicated further by the resignation of Jean-Paul Delevoye, appointed by President Emmanuel Macron to oversee the pension reform, over a scandal about undeclared private sector payments while he was earning a government salary.

Unions have vowed to continue their labour action until Macron drops his pension plan, claiming that millions would have to delay their retirement.

Macron has expressed "solidarity" with the millions affected by the strike but has shown no sign of backing down on what he has called "a historic reform".

But Laurent Berger, head of France's largest union, the moderate CFDT, said the government was "making a huge mistake in terms of social justice, and a huge political mistake" with the 64-year retirement age.

His union otherwise backs the plan for a single pension system.

The standoff has meant daily misery for millions of commuters, and threatens the holiday plans of many.

SNCF has already warned that unless the strike ends soon, it will not have time to get service back to normal by December 25.

The rail operator is due to announce on Tuesday which trains, for which tickets have already been booked, it would be able to guarantee over the holiday period.

Polling agency Ifop, in a survey published by Le Figaro newspaper, found that 55 percent of respondents would find the continuation of the strike over the Christmas holidays "unacceptable".

Several universities, including the Sorbonne in Paris, said Monday they had cancelled or postponed year-end exams because students would not be able to show up.

With air traffic controllers joining Tuesday's strike, the DGAC civil aviation authority asked airlines to cut their programmed flights by a fifth Tuesday to and from Orly airport outside Paris -- the second biggest in France.

Air France subsequently announced it expected to operate all planned long-haul flights, and almost 80 percent of domestic flights to and from Orly.

Retailers, hotel owners and restaurateurs worried for their bottom line as the strike keeps custom away.

Sectoral bodies said turnover dropped between 25 and 60 percent from a year earlier, in the run-up to Christmas -- when most businesses expect to be at their busiest.