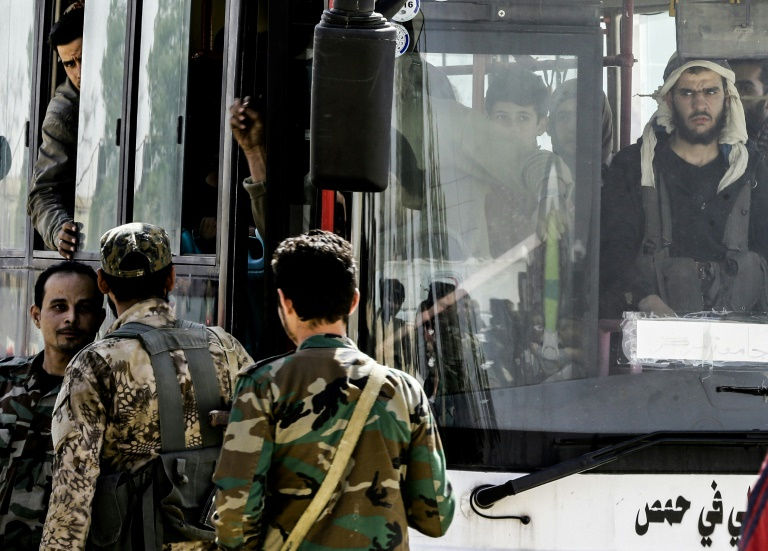 Evacuating Syrians look through the windshield of a bus after arriving to a government-held area at the entrance of Harasta on the outskirts of the capital Damascus, on March 25, 2018 (Photo: AFP)

More than 2,500 Syrian rebels and civilians prepared to leave Eastern Ghouta on Monday after the largest exodus yet from the opposition enclave, as talks stalled over the final pocket of resistance.

Five weeks since government troops launched a ferocious offensive on Ghouta, they hold more than 90 percent of the long-besieged opposition stronghold on the doorstep of Damascus.

The area has been ravaged by heavy bombardment and emptied by an exodus of tens of thousands of residents and negotiated withdrawals of rebels.

A convoy of more than 5,400 fighters and civilians left a pocket of territory held by Islamist rebel group Faylaq al-Rahman late Sunday and reached northwest Syria the following day.

It was the single largest one-day evacuation yet from Eastern Ghouta, after nearly 1,000 people were bussed out from the same area on Saturday.

Syria's ally Russia has been deeply involved in the process, negotiating with rebels and placing masked military escorts aboard buses leaving Ghouta.

More evacuations were expected Monday from the towns of Arbin and Zamalka and the neighbouring district of Jobar, according to Faylaq al-Rahman spokesman Wael Alwan.

"We don't have clear numbers, but we're expecting 7,000 fighters to leave, as well as their families and some civilians," Alwan told AFP.

"This could bring the total number to around 30,000," he said, in a marked increase from state media's reports that 7,000 in total would evacuate.

On Monday, more than 2,700 people, including rebels and hundreds of children, piled into 41 buses to leave the Faylaq-held pocket, state media said.

The departures are part of a deal reached last week that resembles others used by the government to recapture territory throughout Syria's seven-year war.

Eastern Ghouta lies within mortar range of Damascus, and rebels there had threatened to seize the capital from President Bashar al-Assad.

The regime responded with a crippling half-decade siege on the suburb's 400,000 residents, sealing off access to food, medicine and other goods.

On February 18, the regime, its ally Russia and loyalist militia launched an all-out assault, using air strikes and a sweeping ground assault to corner rebels in three isolated pockets.

More than 1,600 civilians have been killed in the operation, according to the Syrian Observatory for Human Rights, a Britain-based monitor.

To help the regime capture the rest, Moscow began talks with the rebels in each area.

The deal with Faylaq al-Rahman on Friday has so far seen 6,400 people leave the pocket it controls, putting Assad within reach of securing the second-last part of the former rebel stronghold.

The convoy of 81 buses that left late Sunday began arriving at a staging ground on the edge of opposition territory in northwest Syria on Monday afternoon.

Dozens of people had been waiting since early morning for the arrival of relatives and friends who were bussed out of Ghouta.

"I'm waiting for my wife's parents who were besieged. We've missed them so much," said Abu al-Laith, who himself was evacuated 10 months ago from another Damascus district.

As the buses pulled in, long-lost relatives broke into tears and hugged each other emotionally.

A third set of talks over the final pocket -- controlled by Jaish al-Islam and including the largest town in the area, Douma -- may not end in evacuation.

"The ongoing negotiations with Russia are to stay in Douma, not to leave it," said Jaish al-Islam spokesman Hamza Bayraqdar, without providing further details.

Russian military police, but not Syria's army, would deploy there.

But divisions within opposition ranks were holding up the talks, Abdel Rahman told AFP.

"Jaish al-Islam's commanders are divided and some are opposed to a deal," he said.

It said a "preliminary understanding" had been reached that would see the "dissolution of Jaish al-Islam, the handover of its heavy weapons and the return of state institutions to the city."

In Douma, residents were torn.

"I've spent my whole life here and lived the revolution. My father died here. How could I abandon his grave?" said Abu Ayman, 30.

"But I could never live alongside regime forces," he added.

Some had already fled into government-held zones, using a corridor opened by regime troops.

About 16,000 people have fled Douma using the route in recent days. Some 200,000 people, including many who fled other parts of Ghouta, are estimated to remain in the town.