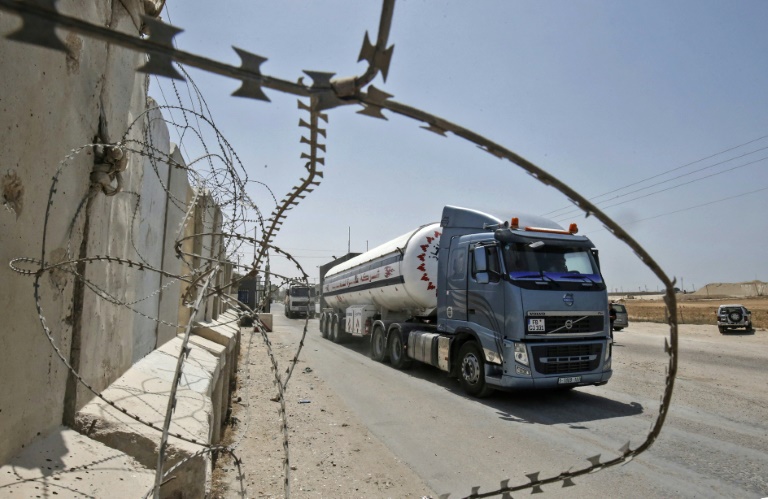 Israel has reimposed a blockade of fuel deliveries to Gaza in response to a resurgence of the flow of fire kites across the border since it lifted it on July 24, Defence Minister Avigdor Lieberman says.（Photo: AFP）

Israel reimposed a blockade on fuel deliveries to Gaza on Thursday citing a resurgence in kites carrying firebombs over the border and signalling a brief pause in tensions may be ending.

After two deadly military flare-ups in the Gaza Strip and a ceasefire brokered by Egypt and UN officials last month, the number of firebombs being launched over the border to burn Israeli farmland had diminished.

"The decision was made in light of the continued terror with Molotov cocktails and the friction on the fence," Lieberman's office said, referring to months of clashes along the Gaza border between the army and Palestinian protesters.

A previous ban on fuel deliveries last month had resulted in warnings from UN officials that emergency fuel supplies were running low and the shortage was beginning to affect hospitals and water sanitation.

The coastal enclave, run by Islamist movement Hamas, suffers from a severe lack of electricity and relies on fuel-powered generators during outages that last hours at a time.

Israel closed the crossing to most deliveries on July 9 in response to the firebombs and border tension before tightening the blockade to cover fuel on July 17.

It lifted the fuel ban a week later. Deliveries of food and medicines have continued throughout.

Months of tension on the Gaza border resulted in two separate military flare-ups in July.

The first, on July 14, saw dozens of Israeli air strikes that killed two Palestinians, while some 200 rockets and mortar rounds were fired from the enclave at Israel in response.

It was the most serious exchange of fire between Israel and Palestinian militants in Gaza since a 2014 war.

On July 20, Israel unleashed a wave of strikes across the territory after a soldier was shot dead on the border. Three Hamas militants were killed in the strikes.

UN officials and Egypt brokered a ceasefire after the July 20 violence that resulted in a drop in tensions.

However, protests and clashes have continued along the border and the kite-borne firebombs have not been stopped completely as Israel demands.

The persistent use of the firebombs has put political pressure on Israel's leaders to act strongly, though military commanders have been reluctant to start a war over the devices.

Israel says the firebombs have sparked hundreds of fires since April and caused hundreds of thousands of dollars worth of damage.

Palestinians see the kites and balloons as legitimate resistance against Israel's decade-long blockade of the territory.

Israel controls all access to and from the Gaza Strip apart from a single crossing with Egypt.

That crossing, known as Rafah, had been kept largely closed in recent years, but Cairo opened it in mid-May and it has remained open most of the time since then.

Israel has fought three wars with Palestinian militants in Gaza since 2008 and says the blockade is necessary to keep them from obtaining weapons or materials that could be used for military purposes.

UN officials have called repeatedly for the blockade to be lifted, citing deteriorating humanitarian conditions in the territory, where some 80 percent of the two million population depend on aid.

Mass protests for the return of Palestinian refugees to their former homes inside Israel erupted along the border on March 30.

Israeli fire has since killed at least 157 Palestinians. One Israeli soldier has also died.