WORLD From understanding to appreciation of cultures

From understanding to appreciation of cultures 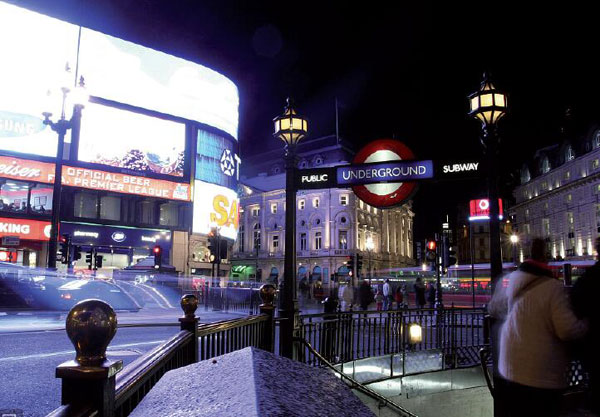 Piccadilly Circus, featured in the London Nights exhibition at the Museum of London. [Photo provided to China Daily]

In early May, the Museum of London opened a new photography exhibition showing London at night, zooming in from landmarks such as Piccadilly Circus and St. Paul's Cathedral, to the little dark corners with barbed wire and empty car parks on the margins of the city.

Elsewhere, moonlight also illuminates the everyday-looking grocery shop, the homeless shelters, and the evening food store outside West End theaters, and much more.

Different artists' diverse approaches to this common theme inspired me to think eeply about the meaning of night in both the Chinese and British cultures, and how my understanding of it changed over the years as I spent more time England.

I remember when I first came to London for university a decade ago, night was once a lonely time when I often felt homesick.

When I saw the bright moon in the dark sky, I would remember the Chinese Tang Dynasty (618-907) poet Li Bai's famous poem Quiet Night Thought, which reads: "I look up to the mountain moon, I look down and think of home."

Similarly, Li's contemporary Zhang Jiuling wrote in another epic verse: "Looking at the moon and thinking of one far away". In Chinese culture, the moon is a symbol of family reunion, hence we eat mooncakes to celebrate Mid-Autumn Festival in September, a little similar to family gatherings at Christmas time.

For this reason, seeing the lonely moon while living in a foreign land triggers the bittersweet sentiment that poets such as Li and Zhang so beautifully depicted.

Strangely, the night and the moon have very different connotations in English culture, and I learnt that while reading literature at university.

In Shakespeare's comedy A Midsummer's Night Dream, the way four young lovers' relationships fall into mistakes before being disentangled under a magic spell produces a fun, funny and enjoyable story. As moonlight shines on the dream-like enchanted forest, the night symbolizes magic, exploration and possibilities.

These varied takes on the meaning of the night in English literature did not quite register with me in my university years. I merely remembered them for my exams.

It was perhaps in the years following university, when I started to observe the liveliness of London's night scene after catching an evening show, when I saw the magnificent St. Paul's Cathedral illuminated by soft lights after a long day of work in the office, that I started to truly feel how nightfall in England can be explored through a new lens.

When I revisit my university textbooks today, I feel better a fuller emotional connection with these lines in Shakespeare and Keats. Similarly, when I looked at each of the photographs in the Museum of London's London Nights exhibition, I felt a strong emotional bond with the artists and their messages.

Today, I often speak to Chinese students, businessmen and tourists coming to the UK for the first time. Their English may be perfect, but they admit that they can sometimes feel a cultural gap when they communicate with their English counterparts.

Sure enough, eliminating this cultural gap requires not just language skills, but patience and an open heart to feel the emotions of another culture. And perhaps realizing this journey will be the first step to building a common language of true appreciation.