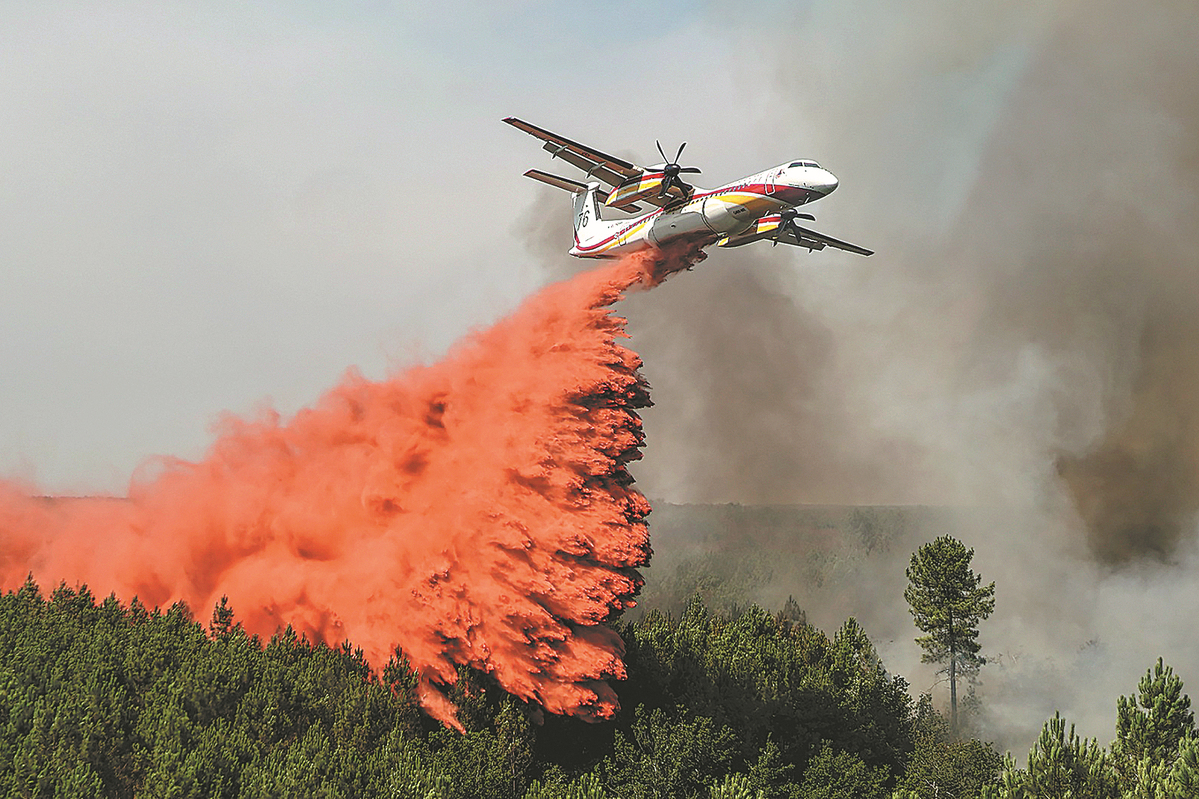 A plane drops fire-retardant as firefighters tackle a blaze near Saint-Magne, south of Bordeaux, southwestern France, on Thursday. (Photo: AP)

PARIS－Firefighters from across Europe struggled on Thursday to contain a huge wildfire in France that has swept through a large swath of pine forest, while Germans and Poles faced a mass fish die-off in a river flowing between their countries.

Europe is suffering under a severe heat wave and drought that has produced tragic consequences for farmers and ecosystems already under threat from climate change and pollution.

The drought is causing a loss of agricultural products and other food at a time when supply shortages and the Ukraine conflict have caused inflation to spike.

In France, which is enduring its worst drought on record, flames raged through pine forests overnight, illuminating the sky with intense orange light in the Gironde region, which was already ravaged by flames last month, and in neighboring Landes. More than 68 square kilometers have burned since Tuesday.

The French wildfires have already forced the evacuation of about 10,000 people and destroyed at least 16 houses.

The European Commission said four firefighting planes would be sent to France from Greece and Sweden, as well as teams from Austria, Germany, Poland and Romania.

"Across the country over 10,000 firefighters and security forces are mobilized against the flames...These soldiers of fire are our heroes," French President Emmanuel Macron tweeted.

In total, 361 foreign firefighters were dispatched to assist their 1,100 French colleagues deployed in the worst-hit part of the French southwest.

In Poland and Germany, along the Oder River that flows north into the Baltic Sea, volunteers have been collecting dead fish that have washed ashore.

Piotr Nieznanski, the conservation policy director at WWF Poland, said it appears that a toxic chemical was released into the water by a factory and the low water levels caused by the drought have made conditions far more dangerous for the fish.

"A tragic event is happening along the Oder River, an international river, and there is no transparent information about what is going on," he said, calling on government authorities to investigate.

People living along the river have been warned not to swim in the water or even touch it.

In northern Serbia, the dry bed of the Conopljansko Lake is now littered with dead fish that were unable to survive the drought.

The water level along Germany's Rhine River is at risk of falling so low that it could become difficult to transport goods－including critical energy items like coal and gasoline.

In Italy, which is experiencing its worst drought in seven decades, the parched Po River has already caused billions of euros in losses to farmers who normally rely on Italy's longest river to irrigate their fields and rice paddies.

The Po runs 652 kilometers from the northwestern city of Turin to Venice. It has dozens of tributary rivers but northern Italy hasn't seen rainfall for months and this year's snowfall was down by 70 percent.