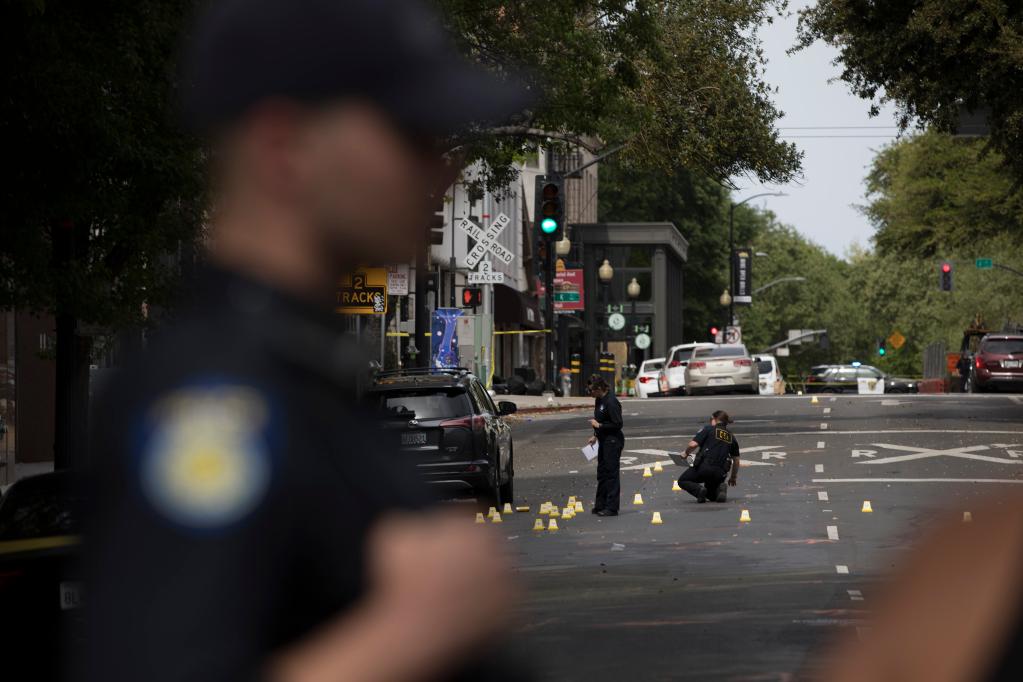 Police officers investigate at the site of a shooting in Sacramento, California, the United States, April 3, 2022. (Photo by Li Jianguo/Xinhua)

- More than 19,500 people have been killed or injured due to gun violence in the U.S. so far this year, according to a database run by the nonprofit research group Gun Violence Archive.

- "The scourge of gun violence continues to be a crisis in our country, and we must resolve to bring an end to this carnage," California Governor Gavin Newsom said.

WASHINGTON, April 4 (Xinhua) -- Frustration over political inaction appeared to be ballooning after another weekend tainted by mass shootings across the United States, including one that killed six people and injured 12 others in Sacramento, the capital city of the western state of California.

The victims were three men and three women, the Sacramento County Coroner's Office said on Monday.

The police continued to appeal for the public's help to find "multiple shooters" who opened fire downtown early Sunday morning. One male suspect was taken into custody on Monday.

Sacramento Police Department said on Sunday that six individuals were pronounced deceased at the scene, with 12 others found with varying degrees of injuries.

"The scale of violence that just happened in our city is unprecedented during my 27 years here," Police Chief Kathy Lester told reporters. "We are shocked and heartbroken by this tragedy." 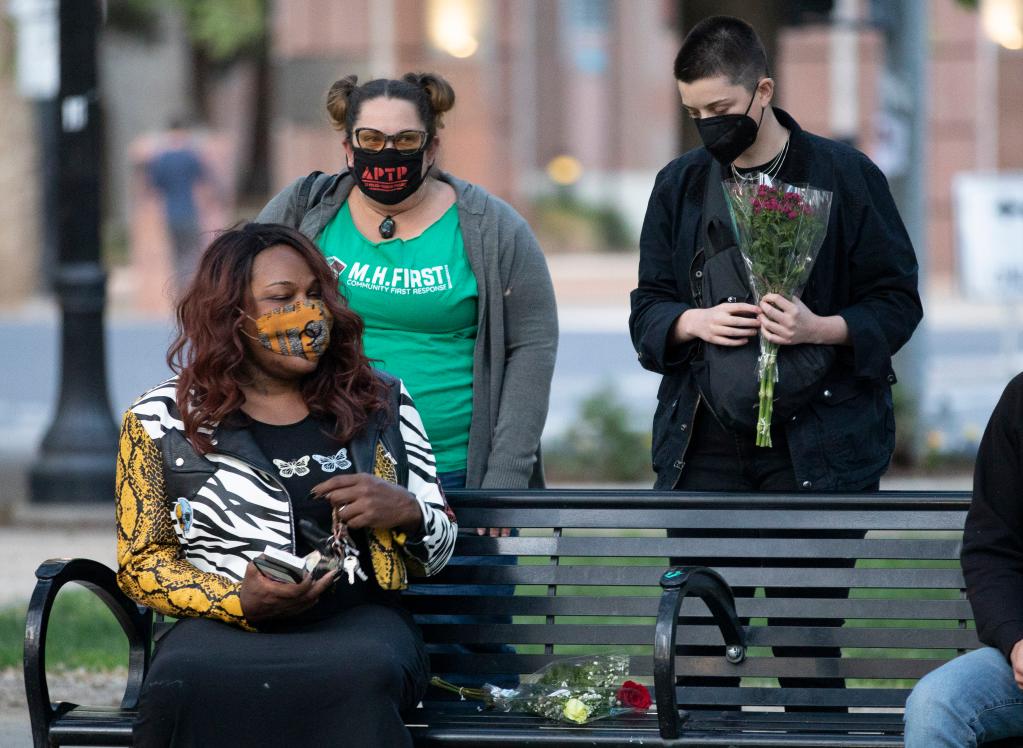 People attend an event to mourn victims of a mass shooting at a park in Sacramento, California, the United States, April 3, 2022. (Photo by Li Jianguo/Xinhua)

The mass shooting occurred near the Golden One Arena which hosts concerts and the NBA's Sacramento Kings. The team's home game against the Golden State Warriors went on as scheduled on Sunday night, beginning with a moment of silence for the victims.

During a press conference on Sunday, Golden State Warriors coach Steve Kerr said a moment of silence was not enough while going on to slam politicians at various levels for not passing "commonsense" measures to strengthen the regulation of guns.

"I don't think moments of silence are going to do anything," Kerr complained. "Our government has to decide, are we going to have some commonsense gun laws? It's not going to solve everything, but it will save lives."

He urged Congress to support his proposals to reduce gun crimes, including banning ghost guns, requiring background checks for all gun sales, and repealing gun manufacturers' immunity from liability, among other things.

"The scourge of gun violence continues to be a crisis in our country, and we must resolve to bring an end to this carnage," California Governor Gavin Newsom said in his statement. 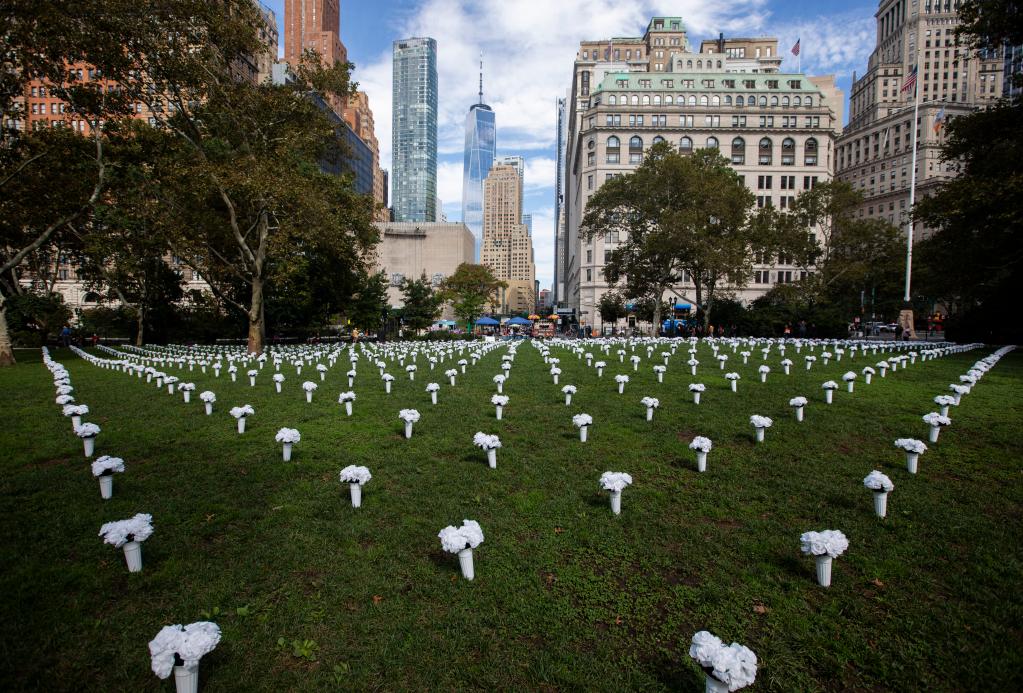 More than 19,500 people have been killed or injured due to gun violence in the United States so far this year, during which at least 121 mass shootings and five mass murders, defined as the killing of four or more people, have been reported, according to a database run by the nonprofit research group Gun Violence Archive.

Sixteen people were injured, including three juveniles, and one person was killed in a Saturday night shooting during a trail ride and concert in Dallas, the southern state of Texas, according to police. As of Monday, all victims were in stable condition.

Police Chief Eddie Garcia told reporters on Monday that detectives were still investigating the shooting and that no suspects have been arrested.

On the East Coast, a man was killed and two women wounded in a shooting at a shopping mall in downtown Norfolk, Virginia, on Saturday evening. The incident came just weeks after five people were shot, including two fatally, on a nearby street in the waterfront city.

Gun violence has been on the rise across the United States in the past few years. Gun control advocates have also blamed the issue on a lack of concrete actions by politicians, government officials, and policymakers.

Retweeting the news of the Sacramento killing spree, gun control advocacy group March For Our Lives wrote, "this is America's normal, but it doesn't have to be." "Our society is broken, and violence is the result," it continued.

Jaclyn Schildkraut, associate professor of criminal justice at the State University of New York at Oswego, tweeted on Sunday that the mass shooting in Sacramento -- as well as everyone killed or injured each day by a firearm -- "is a stark reminder of the public health crisis that is firearm violence."