Firefighters faced dangerously windy weather Tuesday as they struggled to keep the nation's largest wildfire from advancing toward a Northern California city while a portrait of devastation emerged in a small mountain community hit by another inferno. 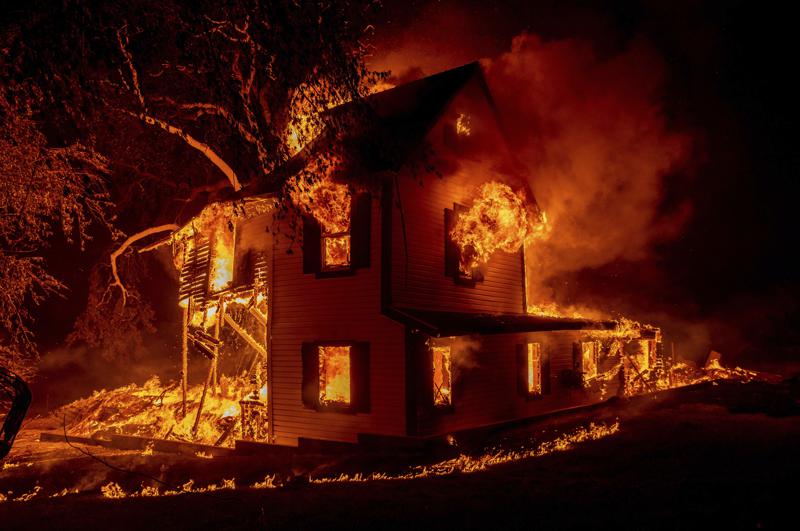 Winds spawned by the arrival of a new weather system Monday afternoon pushed the monstrous Dixie Fire to within about 8 miles (12.8 kilometers) of Susanville, population about 18,000, while to the southeast a small blaze called the Caldor Fire exploded through through Grizzly Flats, a town of about 1,200.

Very few homes were left standing in Grizzly Flats, where streets were littered with downed power lines and poles. Houses were reduced to smoldering ash and twisted metal with only chimneys rising above the ruins. A post office and elementary school were also destroyed.

Two people with serious or severe injuries were airlifted to hospitals from the Grizzly Flats area, fire officials said.

At the Dixie Fire, numerous resources were put into the Susanville area, where residents were warned to be ready to evacuate, said Mark Brunton, an operations section chief.

“It's not out of play, and the next 24 hours are going to be crucial to watch as to what the fire is going to do there,” he told an online briefing.

To the east, spot fires became established south of the small community of Janesville, which had been ordered evacuated. Some structures were lost there — images captured by The Associated Press showed a home consumed by flames — but a surge of firefighters was able to herd the fire around the majority of the town, Brunton said.

The Dixie Fire is the largest of nearly 100 major wildfires burning across more than a dozen Western states that have seen historic drought and weeks of high temperatures and dry weather that have left trees, brush and grasslands as flammable as tinder. Climate change has made the U.S. West warmer and drier in the past 30 years and will continue to make the weather more extreme and wildfires more destructive, according to scientists.

Susanville is the seat of Lassen County and the largest city that the Dixie Fire, named for the road where it started, has approached since it broke out last month. The former Sierra Nevada logging and mining town has two state prisons, a nearby federal lockup and a casino.

Ash fell from the advancing fire, and a police statement urged residents “to be alert and be ready to evacuate” if the fire threatens the city.

The weather forecast prompted Pacific Gas & Electric to warn that it might cut off power to 48,000 customers in parts of 18 California counties Tuesday evening through Wednesday to prevent new fires that could be sparked by wind damage to power lines.

The Dixie Fire has scorched more than 940 square miles (2,434 square kilometers) in the northern Sierra Nevada and southern Cascades since it ignited on July 13 and eventually merged with a smaller blaze. It’s less than a third contained.

Investigations are continuing, but PG&E has notified utility regulators that the Dixie and Fly fires may have been caused by trees falling into its power lines. The Dixie Fire began near the town of Paradise, which was devastated by a 2018 wildfire ignited by PG&E equipment during strong winds. Eighty-five people died.

Ongoing damage surveys have counted more than 1,100 buildings destroyed, including 630 homes, and more than 16,000 structures remained threatened. Numerous evacuation orders were in effect.

The Caldor Fire started Saturday in El Dorado County and remained small until winds fueled its growth to about 10 square miles (26 square kilometers).

About 2,500 people were under evacuation orders and warnings, said Chris Vestal, a fire spokesman. Only a handful of firefighters remained in the town Tuesday, extinguishing residual fires.

Authorities confirmed structures were destroyed and damaged in Grizzly Flats and two other area communities, but Vestal said he could not say how many were affected as it was not safe for inspectors.

“They’re worried about trying to put out the fire or save homes,” he said. He said one person was injured in the fire. He did not provide additional details.

Tami Christner, 36, said she and her family left their Grizzly Flats home late Monday when they got the notice to evacuate. She and her husband started packing earlier in the day and got their three children, 20 chickens, three ducks, two cats, two hamsters, a dog and a rabbit out. One cat, Minion, was lost and didn’t make it out with them, she said.

People throughout the region were offering assistance to evacuees, including the four-footed kind. Susan Collins of Placerville used her horse trailer to help move two horses Tuesday after offering help on an El Dorado County Facebook page.

“I know not everybody is prepared when something like this happens, and my purpose in life is to be there to help people,” she said.

Across the state line in Nevada, school administrators delayed start times in the Reno-Sparks because of a cloak of wildfire smoke from the Dixie Fire blanketing the region. Smoke plumes from the Caldor Fire were also visible from northern Nevada.

Two dozen fires were burning in Montana and nearly 50 more in Idaho, Washington and Oregon, according to the National Fire Interagency Center.

The mandatory evacuation covered Lodge Pole, a town of about 300 people on the Fort Belknap Indian Reservation, and the former mining town of Zortman, which has about two dozen people, KOJM reported.